Did Mitch McConnell Pose in Front of a Large Confederate Flag?

A controversial photograph of a Republican U.S. Senate leader resurfaced after Democrats posted it to Twitter. 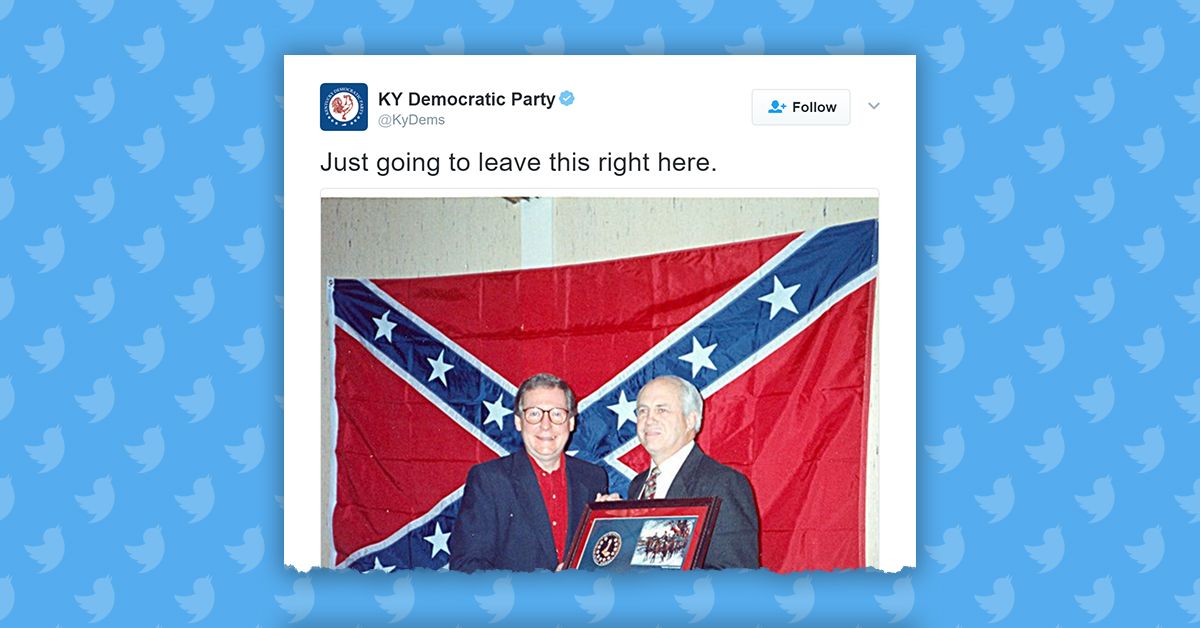 On 8 February 2017, the Kentucky state Democratic party posted a picture on Twitter that appeared to show Senate Majority Leader Mitch McConnell receiving an award while posing in front of a large Confederate flag backdrop: The tweet followed a contentious session on the floor of the U.S. Senate floor on the eve of the swearing-in as U.S. Attorney General of Alabama senator Jeff Sessions, whose nomination by President Donald Trump to head the country's top law enforcement agency had been controversial from the start. In 1986, President Ronald Reagan had nominated Sessions for a federal judgeship, but that nomination was struck down by a Republican-led Judiciary Committee over allegations that Session had a record of "racial insensitivity."

Mr. McConnell called the Senate to order under what is known as Rule XIX, which prohibits debating senators from ascribing “to another senator or to other senators any conduct or motive unworthy or unbecoming a senator.”

When Mr. McConnell concluded, Ms. Warren said she was “surprised that the words of Coretta Scott King are not suitable for debate in the United States Senate.” She asked to continue her remarks.

“Objection is heard,” said Senator Steve Daines, Republican of Montana, who was presiding in the chamber at the time. “The senator will take her seat.”

This photograph of McConnell had previously surfaced in mid-2015, in the midst of a wrenching national debate over whether to eliminate the display of Confederate flags and symbols from public grounds that began after white supremacist Dylan Roof massacred nine African-American worshipers at Emanuel African Methodist Episcopal Church in Charleston. At that time, Senator McConnell issued a statement declaring that "time for a state to fly [the Confederate flag] has long since passed":

The Confederate Battle Flag means different things to different people, but the fact that it continues to be a painful reminder of racial oppression to many suggests to me at least that it's time to move beyond it, and that the time for a state to fly it has long since passed. There should be no confusion in anyone's mind that as a people we're united in our determination to put that part of our history behind us.

The photograph seen here, reportedly taken in the early 1990s at a Sons of Confederate Veterans (SCV) event, was then proffered as an example of Senator McConnell's seemingly fluid attitude towards the Confederate flag:

Senate Majority Leader Mitch McConnell (R-KY) was among the first to call for the Confederate Army of Northern Virginia’s battle flag to come down in public spaces.
He subsequently suggested that it may be time to remove a statue of Jefferson Davis from the Kentucky state capitol, and put it in a museum.

The Kentucky senator was not always so scrupulous

The image was taken in the early 1990s at the Big Springs Country Club in Louisville during a meeting of the John Hunt Morgan Camp of the Sons of Confederate Veterans.

While the SCV might be considered an organization whose use of the Confederate flag places it in an appropriately historical context, the group was the subject of some notoriety over a rift between those who wanted the SCV's focus to remain about preserving history, and those who wanted to use it to "fight for the right to display Confederate symbols everywhere":

Within the SCV’s ranks, however, a battle is now raging over whether the group should stick to maintaining gravestones, erecting monuments and studying Civil War history or fight for the right to display Confederate symbols everywhere from schools to statehouses.

The bitter conflict has divided the organization’s more than 31,000 members, all of them descendants of Confederate soldiers. Some disaffected members even formed a splinter group — Save the Sons of Confederate Veterans — last fall to defeat what they call the “radical agenda” of the current national leadership.

And smack dab in the center of the controversy stands Kirk D. Lyons, a Black Mountain lawyer who gained prominence years ago for defending members of the Ku Klux Klan and other white-supremacist groups. That background attracted national media coverage of the heritage group’s internal strife.

“We need to be the pre-eminent defender of Southern heritage,” Lyons [said]. “That is our charge under the charge of Stephen Dill Lee. And I wanted everyone in my administration to live that charge every day. Read that charge when you get up in the morning, go to bed remembering that charge. That charge is what we’re about, and that’s what we’re pushing.”

We did not receive a response from Senator McConnell's spokesman in response to our request for background on the photograph.