A commonly shared photograph of abandoned signs from the Women's March on Washington lacks some context. 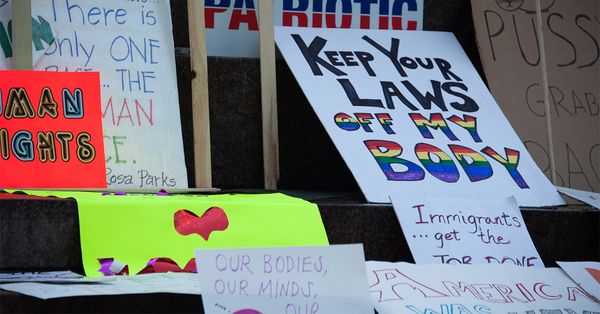 The 21 January 2017 Women's March on Washington was a rousing success from a purely numerical standpoint, drawing a crowd estimated at upwards of 470,000 people in and around the National Mall area at its peak.

Nonetheless, the event had its critics, some of whom chose to take participants to task for being messy:

Of course, any event that involves so many people gathering in one place inevitably results in a good deal of refuse being left behind. No matter how many participants may be conscientious about packing out everything they bring with them or use during the day, some percentage of them will simply abandon trash and leave it for others to deal with (especially since available receptacles are often inadequate in volume and number and end up being filled to overflowing long before everyone has departed the scene — a particular challenge in this case, as the National Mall site was host to two mass events on consecutive days). Even a small portion of a very large crowd can leave quite a mess.

Although the photograph displayed above does show thousands of signs carried by Women's March protesters that were dumped on the ground and left behind, it's typically shared without a few key pieces of context:

1) The signs in the picture weren't just tossed willy-nilly onto the ground; they were deliberately abandoned at that location — outside one of the entrances to the Trump International Hotel in Washington — as part of the protest:

Thousands of signs were left in front of the Trump International Hotel near the White House as demonstrators walked.

Holly Willebrand took a photo of herself in front of the sea of hand-crafted messages.

2) The hotel site was already politically controversial for reasons independent of the Women's March on Washington:

The 263-room luxury hotel opened in November 2016, in a century-old post office building which is part of the Pennsylvania Avenue National Historic Site. The minimum nightly rate is $735, while one top-end suite was reportedly available for $500,000 during inauguration week.

There were protests when Trump won the lease, given his track record of bankruptcies and his lack of experience in preserving or caring for historic buildings. Renovation works cost around $2m, and the Trump Organization is believed to pay around $3m a year in rent.

The hotel was the location of inauguration events such as a prayer breakfast at the hotel, and is currently hosting various members of Mr Trump's new cabinet, along with donors and foreign officials hoping to win the favour of the new President.

Since being sworn in as president, Mr Trump may now be in violation of a provision that no federal official may rent the building, theoretically opening him to litigation. He is certainly making money from the foreign diplomats currently staying in the hotel, in a further economic conflict of interest.

Michelin-starred Spanish-American chef and philanthropist José Andrés was supposed to be providing catering for the hotel, but pulled out after Mr. Trump disparaged Mexicans and immigrants during his electoral campaign, implying they were criminals, rapists and killers.

3) Piling refuse in one location generally makes it easier for clean-up crews to do their job (although that factor wasn't why the protesters were dumping their signs outside the Trump hotel).

Regardless, one might fairly argue that a form of protest involving the dumping of litter on the ground for others to clean up is an unseemly one. However, the National Park Service noted that, overall, the crowds at both events (i.e., the inauguration and the Women's March) were "tidier" than those of previous years:

The cleanup continues on the National Mall following the inauguration and the Women’s March on Washington Saturday.

The National Park Service has been working to get the area back to its original condition, removing trash, taking down the fencing and pulling up the decking for the recent activities.

“We’ve had our maintenance team out there since last night when they already did a pass,” National Park Service spokeswoman Emily Linroth said Saturday. “Today, they are really going through with a fine tooth comb and picking up what’s left. They do this every July Fourth, so they are pros at it.”

This time around, officials say, visitors were tidier than prior years. Linroth says so far, the cleanup is going well.

“Fortunately, a lot of people, even though, the trash cans were full, have stacked the trash neatly as close to the trash cans as they could get them, so that is making our job easier,” Linroth said.