Summer Zervos had accused Trump of sexual misconduct, and filed the suit saying he publicly defamed her by calling her a liar. 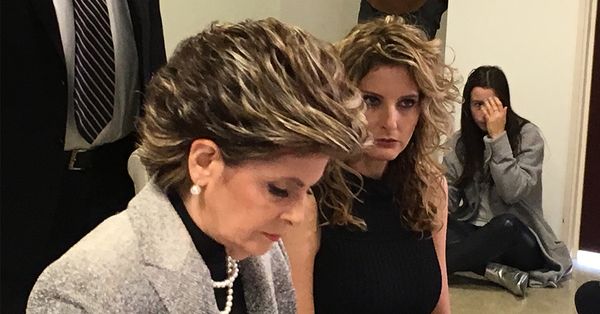 On 17 January 2017, Summer Zervos, once a contestant on President-elect Donald Trump's television show The Apprentice, filed a defamation lawsuit in New York, claiming that Trump defamed her by publicly calling her a liar after she accused him of sexual harassment.

During a same-day press conference held at the Los Angeles-area office of her attorney, Gloria Allred, Zervos vowed she would drop the case with no damages or attorneys fees if Trump publicly acknowledged that her allegations against him are true:

Today I filed a lawsuit against Donald Trump for defamation. On November 11 2016, I called on Mr. Trump to retract his statements about me, calling me a liar. I also called on him to state that what I said about his behavior towards me was true. More than two months have gone by and he has not issued that retraction. I wanted to give Mr. Trump the opportunity to retract his false statements about me and the other women who came forward. Since Mr. Trump has not issued a retraction as I requested, he has there fore me no alternative other than to sue him in order to vindicate my reputation.

Zervos had accused Trump of inviting her to his room at the Beverly Hills Hotel, where he was staying, in order to discuss her career. According to the lawsuit, he then began kissing her with an open mouth, placing his hand on her breast:

When Ms. Zervos arrived at the Beverly Hills Hotel, Mr. Trump's security guard led her to a bungalow... After waiting for Mr. Trump for 15 minutes, he came out of a bedroom in a suit.

Mr. Trump walked up to Ms. Zervos, grabbed her hand, and led her into the bedroom. Ms. Zervos walked out. Mr. Trump turned Ms. Zervos around and said, "Let's lay down and watch some telly telly." He embraced her and she tried to push him away, shoving his chest away from her and telling him sternly, "come on man, get real." Mr. Trump repeated her words back to her lasciviously, drawing out the second word and saying, "get reeeeal," as he began to press his genitals against her, trying to kiss her again.

Trump has said all the women accusing him of sexual assault were lying. We have reached out to Trump's press office for comment but have not yet received a response.

According to the lawsuit, Zervos initially met Trump at Trump Tower in New York in December 2007, where she claims he kissed her on the lips without her consent, making her feel uncomfortable. Hailing from Orange County, California, she claims Trump called her his "OC Angel." The lawsuit states that despite the encounters, she had consistently sought guidance and employment from Trump through the years. At one point, she was offered a job by the general manager of Trump's golf course, but the salary was half what she had asked for.

When tapes of Trump and Access Hollywood host Billy Bush having a lewd conversation in 2005 were leaked to the media, Trump could be heard stating he is prone to grab and kiss women he finds beautiful and that fame allows him to do anything including, infamously, to "grab them by the pussy."

The lawsuit also says that the recording made Zervos feel that she was ethically bound to come forward with her allegations. After her initial accusations, Trump said:

To be clear, I never met her at a hotel or greeted her inappropriately a decade ago. That is not who I am as a person, and it is not how I've conducted my life.