Did an Untamed Coal Fire Sink the Titanic?

A documentary from 2017 reignited theories about a well-documented coal fire’s contribution to the infamous ship’s demise. 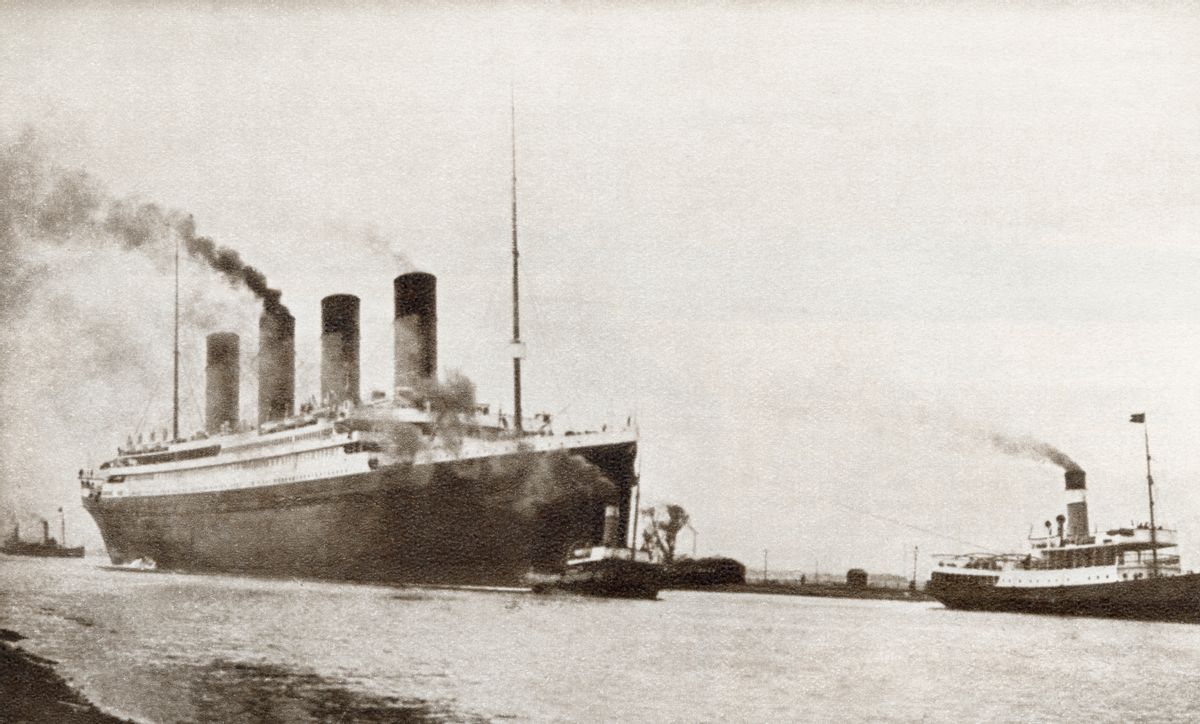 As early as December 2020, online advertisements about the Titanic's sinking led to 80-page slideshow stories. These slideshows pushed the same theory discussed in this story, and used a clickbait headline: "Experts Reveal The Potentially Hidden Truth Behind The Titanic."

On Jan. 1, 2017, the United Kingdom's Channel 4 premiered a documentary titled, "Titanic: The New Evidence." Numerous news organizations reported on the story it presented with some variation of "New Evidence Suggests Iceberg Didn’t Sink Titanic" as their headlines.

More precisely, however, the documentary presented the theory that a long-lasting, smoldering coal fire was responsible for both weakening the RMS Titanic’s defenses to an iceberg and also for its high rate of speed prior to its impact. This does not preclude an iceberg, which was still very much in the mix.

The documentary followed Senan Molony, a reporter who has researched and published numerous books on the mighty vessel. The theory, which was not quite as original as it has been reported to be, was built around newly unearthed photos of the ship prior to embarking on its maiden voyage, a fresh look at the testimony of a number of officers and survivors, and observations provided by computer models that purport to illuminate what structural damage would have been like had there been a smoldering coal fire.

By way of a very streamlined description, the theory rested on three assertions: 1) Prior to leaving the port where it was constructed, a spontaneous coal fire broke out in one of the Titanic’s coal bunkers that remained lit during much, if not all, of the ill-fated journey; 2) the crew attempted to extinguish the fire by burning coal at a faster speed; 3) the Titanic’s fast speed combined with structural damage caused by the fire made what would have been a survivable collision with an iceberg a catastrophic disaster.

Evidence for a fire prior to Titanic’s maiden voyage

The idea of a spontaneously occurring smoldering coal fire burning at a slow rate for an extended period of time, as a scientific concept, is valid. Here’s a brief overview of the process provided in a 2007 review on the topic published in the journal Reviews in Engineering Geology:

As Molony points out in the documentary, there are a number of compelling eyewitness accounts attesting to the presence of a coal fire prior to the Titanic’s maiden voyage. Most compelling, perhaps, is the testimony of a member of Titanic’s fire crew named John Dilley. This provides a large part of the evidence for that claim.

The following clip from a April 26, 1912, story in the DuPage County Register is representative of the reporting on Dilley’s testimony: In terms of the slow burning coal fire’s existence prior to that trip, the new evidence presented in the Channel 4 documentary comes in the form of a recently discovered collection of photographs of the Titanic taken by Harlan and Wolff’s [the company that built the ship] electrician prior to and immediately after it was placed in the sea in Belfast, as described in a New York Times report from 3 January 2016:

The photographs were discovered by a descendant of a director of the Belfast-based company, Harland and Wolff, that built the Titanic. About four years ago, a collaborator of Mr. Molony’s acquired the rare photographs of the ship, meticulously taken by Harland and Wolff’s engineering chief before it left a Belfast shipyard.

When the two men looked closely at the images, Mr. Molony said, they were shocked to discover a 30-foot-long diagonal black mark on the hull’s front starboard side, close to where the ship was pierced by the iceberg. An analysis by engineers at Imperial College London subsequently revealed that the mark was most likely caused by a fire in a coal bunker of the ship.

This marking, it turns out, is located where the #6 coal bunker would be, which was both the location of the primary bunker fire, and is also the place that the iceberg struck, Molony argues.

Evidence that firefighters dealt with the coal fire by burning coal at a faster rate, causing the Titanic’s high speeds.

The documentary’s novel theory for this fire’s role in the disaster comes, essentially, from the combination of two existing explanations for how a coal fire could have contributed to or caused the Titanic’s demise. The first explanation — that the Titanic’s unconscionably fast speed at the time of the impact was caused by coal workers and firefighters trying to stop the fire by getting rid of much burning coal as possible — was first presented at the 2004 Geological Society of America by a former mechanical engineering professor at The Ohio State University. Here is the claim as described in its conference abstract:

Why was the ship at full speed under those conditions? It was not trying to set a cross Atlantic speed record; the ship was designed for luxury, not speed. The answer may be a smoldering fire in coal bunker #6. Spontaneous ignition of coal in seams, culm banks, and bunkers is well-known with a long history.

At the time of the Titanic sailing, it was known as a chronic, but not an acute problem. The most effective containment solution involved sailing at full speed to drawdown the coal in the bunker until the smoldering coal could be extracted and fed into the boiler. This may be why the Titanic proceeded at full throttle through the ice field. Bunker fires being a chronic problem, fire control teams were common in port and on many ships, including the Titanic.[...]

At full speed, the bunker fire would have had a net drawdown rate of the order of 1-in/hr. At this rate, a fire that originated in the top half of the bunker would still have been in the bunker at the time of collision. Two dimensional computer models for the initiation of fires in coal piles are used show a possible behavior pattern relevant to the Titanic bunker fire.

The documentary uses the testimony of another Titanic firefighter named Charles Hendrickson, who stated to the official British enquiry that they didn’t begin fighting the fire until they departed Southampton on Titanic’s maiden voyage, to bolster the point that the fire had to be dealt with during, and not before, the voyage itself.

The final bit of information used by the documentary to establish a link between the coal fire and the Titanic’s increased speed comes from a New York Tribune article written just five days after the disaster. In it, the account of an anonymous officer appears to suggest the fire had spread to other bunkers: This fact, the documentary argues, would have necessitated an even faster rate of coal removal, and therefore even faster speeds. The documentary combines this information with commentary from maritime historian, author, and engineer Richard de Kerbrech, to suggest that dwindling coal supplies prevented the ship from stopping or slowing down. This aspect of the theory, however, is among the more speculative components of the documentary.

The second previously presented aspect of the new combined story proposed by Molony is that this fire damaged what was meant to be a waterproof seal used to keep the ship from taking on too much water.

Charles Hendrickson, mentioned above, testified to the fact that the wall opposing one of the coal bunkers, when viewed from the outside, was damaged. This is significant, Molony argued, because the coal bunkers shared walls with regions of ship termed bulkheads, which were intended to compartmentalize and seal off a damaged part of a boat to prevent the rest of a damaged ship from taking on water. Here’s a transcript of his testimony to the official British enquiry into the sinking, which was also dramatized in the documentary:

Question: The bulkhead forms part of the bunker – the side?

– Yes, you could see where the bulkhead had been red hot.

Question: You looked at the side after the coal had been taken out?

Question: What condition was it in?

– You could see where it had been red hot; all the paint and everything was off. It was dented a bit.

Question: It was damaged, at any rate?

Question: Was much notice taken of it. Was any attempt made to do anything with it?

– I just brushed it off and got some black oil and rubbed over it.

Another account, this one from “lead stoker” Frederick Barrett, described the damage to this bulkhead as well. The emphasis indicates the text featured in the documentary:

Question: What was the condition of the bulkhead running through the bunker?
— It was damaged from the bottom.
Question: Badly damaged?
— The bottom of the watertight compartment was dinged aft and the other part was dinged forward.
Question: What do you attribute that to?
— The fire.
Question: Do you mean to say the firing of the coal would dinge the bulkhead?
- Yes.

The implication made by the inclusion of these two accounts in the documentary is that the fire broke a watertight seal between a coal bunker and a bulkhead, making it impossible for the Titanic to stay afloat.
This is where the documentary’s second bit of newly introduced "evidence" comes into play. The documentary attempts to demonstrate the plausibility of those accounts and this mechanism by employing the efforts of Imperial College London fire expert Guillermo Rein and University of Birmingham metallurgy expert Martin Strangwood.

Based on what were described only as “experiments in my lab”, they provided computer-generated images that suggested the bulkhead wall could deform in a way that could plausibly be described as having one part “dinged aft” and another part “dinged forward.” This scientific investigation’s methods have not been published in a scientific journal or further peer-reviewed, so this aspect of the work — while potentially compelling — is challenging to verify.

Titanic: The New Evidence does not provide as much new evidence as the title may suggest, but it does bring together various alternative theories about the cause of the Titanic’s demise into an entertaining, if not compelling, single narrative. The question ultimately comes down to this: Would it have sunk anyway, or does the ship’s sinking actually require the coal fire as an integral part of that process. Not everyone agrees on the answer.

Speaking to the New York Times about this new narrative, former honorary secretary of the British Titanic Society David Hill, said this:

When the Titanic hit the iceberg close to midnight on April 14, 1912, it created a 300-foot-long line of damage on the starboard section of the hull, including punctures and gashes, that opened up too many compartments to the sea, so that the weight of the water dragged the bow down so low that the ship eventually sank [...]
A fire may have accelerated this. But in my view, the Titanic would have sunk anyways.

Whether the coal fire played a role in both the speed and the structural failure of the Titanic prior to its collision, or whether both mechanisms are needed in concert (or at all) remains an open debate.

That there was a smoldering coal fire on board even before the Titanic’s maiden voyage, regardless of its contribution to the disaster, however, is a remarkable bit of trivia in its own right.

www.titanicspeakersbureau.com.     "The fire on the Titanic – testimony of Charles Hendrickson, crewman of the Titanic."

Essenhigh, Robert H. "What Sank The Titanic? The Possible Contribution Of The Bunker Fire."    Geological Society of America Conference, Denver.   2004.

Nelson, Mark and Chen, Xiao Dong.   "Survey of Experimental Work on the Self-Heating and Spontaneous Combustion of Coal."    Reviews in Engineering Geology.   2007.