Was Pearl Harbor an 'Inside Job'?

The creator of a viral post said the meme he made was meant as nothing more than a gag for a limited audience, but some viewers took it seriously. 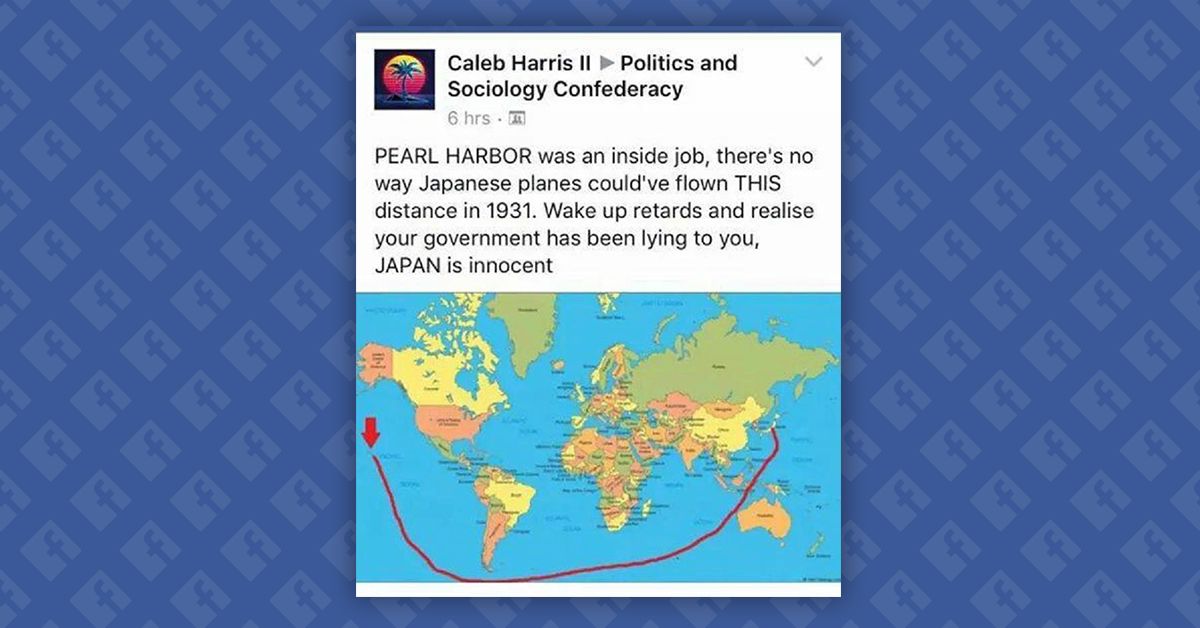 A Facebook post poking fun at flat-earth believers and conspiracy theorists went viral on 29 December 2016, claiming that the 7 December 1941 attack Pearl Harbor was an "inside job."

As "proof," the meme's creator scrawled a red line from Japan to Hawaii on a flat rectangular map that circumvented land masses — glossing over factual contradictions and errors including that the map's flatness made the distance between the two locations appear to be a ridiculously large one, that planes don't need to skirt land masses (they can indeed fly over land), and that the attack planes didn't fly the entire distance from Japan to Hawaii because they were brought to within striking range of Oahu on aircraft carriers: The image was originally posted in a closed Facebook group called the "Politics and Sociology Confederacy" by Caleb Harris. Harris said he meant the image as a gag, but he noticed after posting it that people had begun to share his image widely across social media:

I posted the photo in the Politics and Sociology group for a joke as it clearly isn't a very serious group, then Wednesday night [29 December 2016] it began popping up on my news feed and I started getting messages from people who took it too seriously.

Harris said he purposely got the date wrong by ten years, and drew the line around the land masses to make it look "more stupid."

Harris said the image was mostly meant to make fun of people who believe the world is flat, but there is, of course, a conspiracy theory that claims the Japanese attack on Pearl Harbor was an "inside job." It falls in line with other "false flag" conspiracy theories by alleging the U.S. government allowed a catastrophic attack on its own soil for the express purpose of advancing military strategic goals.