George Ciccariello-Maher said the school's response to the controversy "sets a frightening precedent." 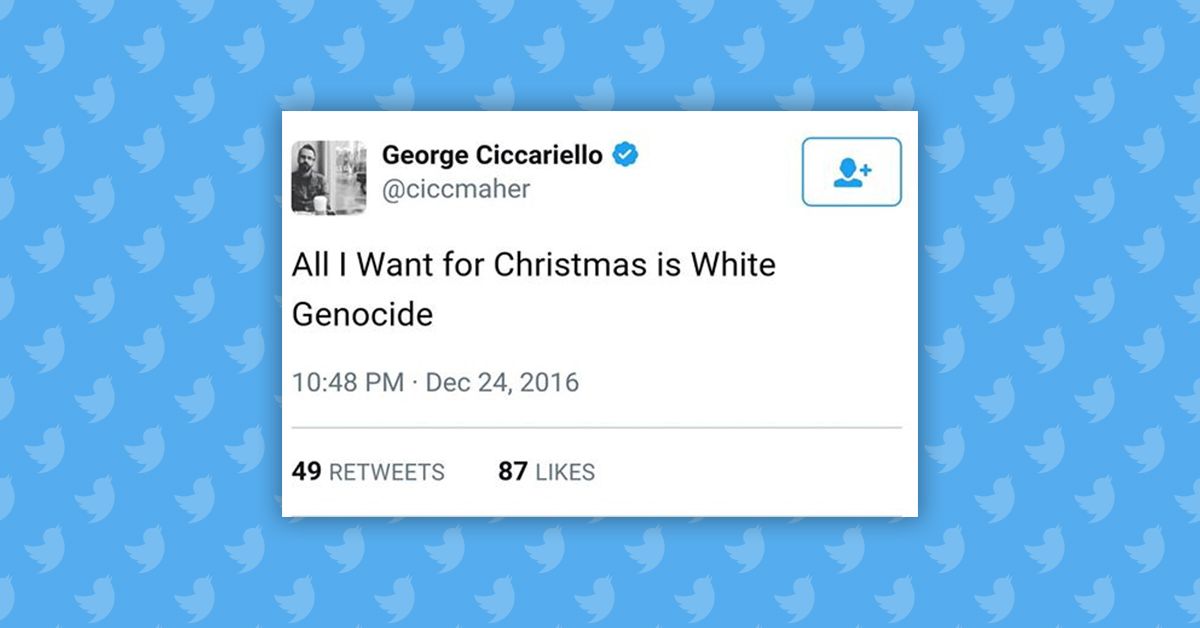 Drexel University publicly rebuked a faculty member on 25 December 2016 after his tweet about "white genocide" was criticized by conservative media outlets.

The debate surrounding George Ciccariello-Maher, an associate professor of politics and global studies at the Pennsylvania-based university, concerned his post on Twitter of a day earlier in which he stated "All I Want for Christmas is White Genocide." Criticism of Ciccariello-Maher's tweet spurred a response from the university:

Drexel became aware of Associate Professor George Ciccariello-Maher's inflammatory tweet, which was posted on his personal Twitter account on Dec. 24, 2016. While the University recognizes the right of its faculty to freely express their thoughts and opinions in public debate, Professor Ciccariello-Maher's comments are utterly reprehensible, deeply disturbing, and do not in any way reflect the values of the University.

The University is taking this situation very seriously. We contacted Ciccariello-Maher to arrange a meeting to discuss this matter in detail.

Ciccariello-Maher issued a response of his own, calling the tweet "satirical" and accusing Drexel of "caving" to the criticism:

On Christmas Eve, I sent a satirical tweet about an imaginary concept, 'white genocide.' For those who haven't bothered to do their research, 'white genocide' is an idea invented by white supremacists and used to denounce everything from interracial relationships to multicultural policies (and most recently, against a tweet by State Farm Insurance). It is a figment of the racist imagination, it should be mocked, and I'm glad to have mocked it. What I am not glad about is that this satirical tweet became fodder for online white supremacists to systematically harass me and my employer, Drexel University. Beginning with Breitbart.com ... and running through the depths of Reddit discussion boards, a coordinated smear campaign was orchestrated to send mass tweets and emails to myself, my employer, and my colleagues. I have received hundreds of death threats.

While Drexel has been nothing but supportive in the past, this statement is worrying. While upholding my right to free expression, the statement refers to my (satirical) tweets as 'utterly reprehensible.' What is most unfortunate is that this statement amounts to caving to the truly reprehensible movements and organizations that I was critiquing. On the university level, moreover, this statement — despite a tepid defense of free speech — sends a chilling message and sets a frightening precedent. It exposes untenured and temporary faculty not only to internal disciplinary scrutiny, but equally importantly, it encourages harassment as an effective means to impact university policies.

White supremacy is on the rise, and we must fight it by any means. In that fight, universities will need to choose whether they are on the side of free expression and academic debate, or on the side of the racist mob.

We reached out to Ciccariello-Maher for comment, but he has yet to respond to our inquiry.

A petition supporting Ciccariello-Maher has also been created online, seeking 5,000 signatures in his defense against what the author, Cynthia Walker, called a "deafening, organized troll-storm."