Pentagram Displayed at Florida Park Run Over by Angry Driver

A Satanic display placed in the city's free speech area has been vandalized multiple times. 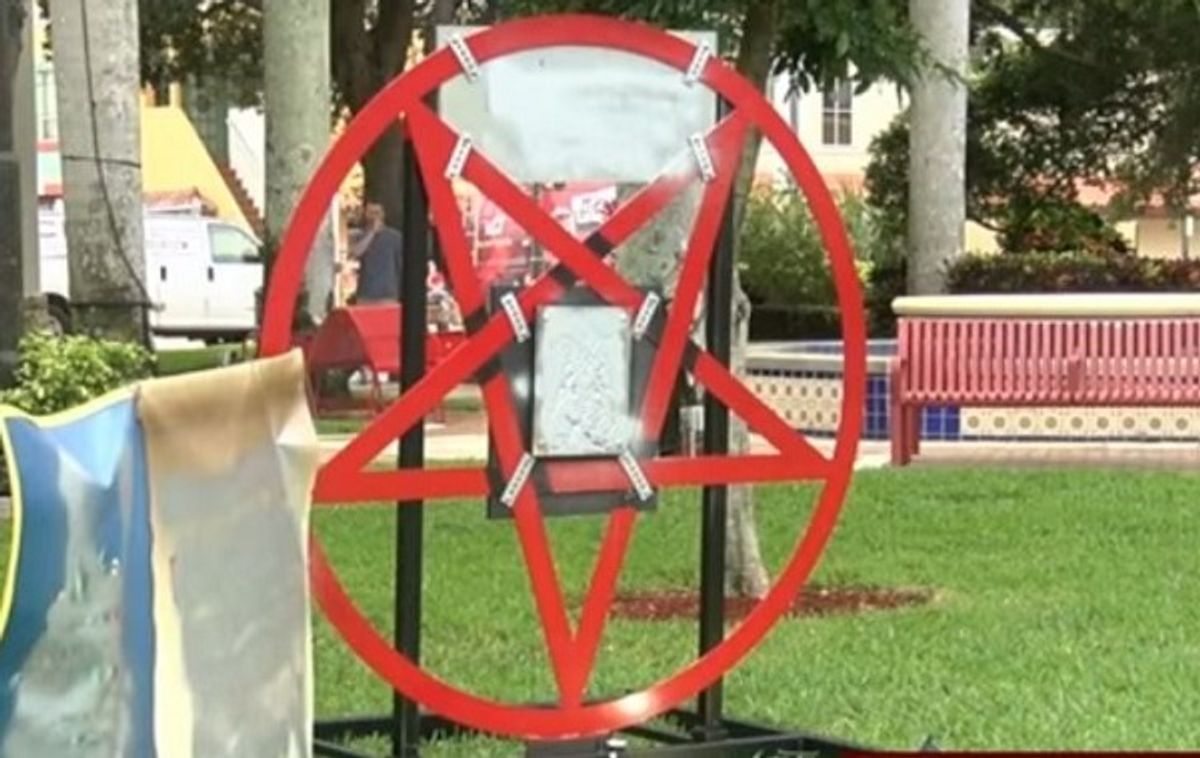 A Boca Raton school teacher and member of The Satanic Temple activist group has launched a local controversy after erecting a 300-pound pentagram display next to a nativity scene on public grounds in early December 2016. Some time overnight on 20 December 2016, an angry observer ran over it, according to Boca Raton police. Local news footage showed the pentagram on the grass, bisected by tire marks.

According Mark Economou, spokesman for the Boca Raton Police Department, an officer patrolling the area noticed at about 2 a.m. on 20 December 2016 that the display had been knocked down and there were tire marks around it. The display has been vandalized several times since being installed and has drawn anger from some residents who say it offends them. The incident is being investigated and so far, there are no suspects, Economou said.

The 10-foot-tall red pentagram fixture was put up on 7 December 2016, accompanied by the words:

May the children hail Satan.

It was installed at Sanborn Square, where the city has allowed multiple groups to put up religious displays. Aside from the pentagram, there is a menorah and a nativity scene on display, along with a sign posted by the local interfaith community denouncing the Satanic display:

The interfaith religious community honors our constitutional rights of freedom of speech and worship. We are blessed to live in a country that cherishes and protects these rights. The use of satanic symbols is offensive and harmful to our community’s well-being. We find it a shameful and hypocritical way to advocate for freedom of religion. We stand united for the life-giving values of justice, mercy and peace at the heart of our religious traditions.

The pentagram was installed by Preston Smith, a local public school teacher and member of The Satanic Temple, who is known to locals as an activist for the separation of church and state. Smith didn't reply to an e-mailed request for comment, but Satanic Temple founder and spokesman, Lucien Greaves, told us the reasoning behind the display:

Any time the Government opens public grounds to religious displays it becomes an open forum for Free Speech. It is a fundamental premise of our Constitutional rights that we don't allow the Government to act as arbiter as to what is appropriate religious opinion. Today's theocrats mindlessly assault religious liberty while senselessly claiming to uphold it.

Satanic Temple members do not worship a deity, but instead abide by a set of humanistic tenets. The group actively uses public displays of Satanic imagery to challenge what they see as incursion by the country's Christian majority onto laws that guarantee plurality, privacy and religious freedom. In 2015, they successfully challenged the constitutionality of a Ten Commandments monument placed on Oklahoma Statehouse grounds by applying to place a statue of the goat-headed deity Baphomet there as well. They sued, and won, when their request was denied. They make regular use of the court system to challenge laws they believe force Christian beliefs on the public.

According to WPTV, some parents, including the PTA president, don't want Smith teaching language arts to middle school students in Palm Beach County anymore. Kim Bremer, PTSA president, told local news reporters she plans to picket outside his school, Boca Raton Community Middle School, on 21 December 2016. This drew a reaction from Greaves, who wrote a letter to Bremer vowing to launch an After School Satan program at the school if she continued her campaign against Smith:

I think your actions are deplorable and they send forth the wrong message to the children in your district that non-Christian religious voices aren't welcome. If you persist in victimizing this teacher, I promise you, I will correct that message. You may either accept that school teachers may hold whatever religious opinions they like outside school or I will bring the Satanic Temple into your school by way of introducing an After School Satan Club.

In the past, the Satanic Temple has launched After School Satan clubs at public schools that allowed The Good News Club and similar religious programs offered by evangelical Christians. The Satan clubs, said Greaves, "don't contain in their curriculum any items of religious opinion and doesn't proselytize. Instead, our after-school program focuses on scientific rationalism and critical thinking."

Despite the anger directed at Smith, Superintendent Robert Avossa said he has the right to express himself outside school and won't be dismissing Smith as a result of his activities:

We certainly can’t micro-manage what an individual does outside of the schoolhouse. I am aware of the situation. This isn’t the first time this individual has participated in an activity like that. What we do is answer any questions as they come up at the school.

Aside from the planned protest, according to WPTV, parents are drafting a petition to have Smith removed from his teaching post.