Multiple reports out of Turkey indicate Russian ambassador Andrey Karlov was shot and grievously wounded at the opening of an art gallery. 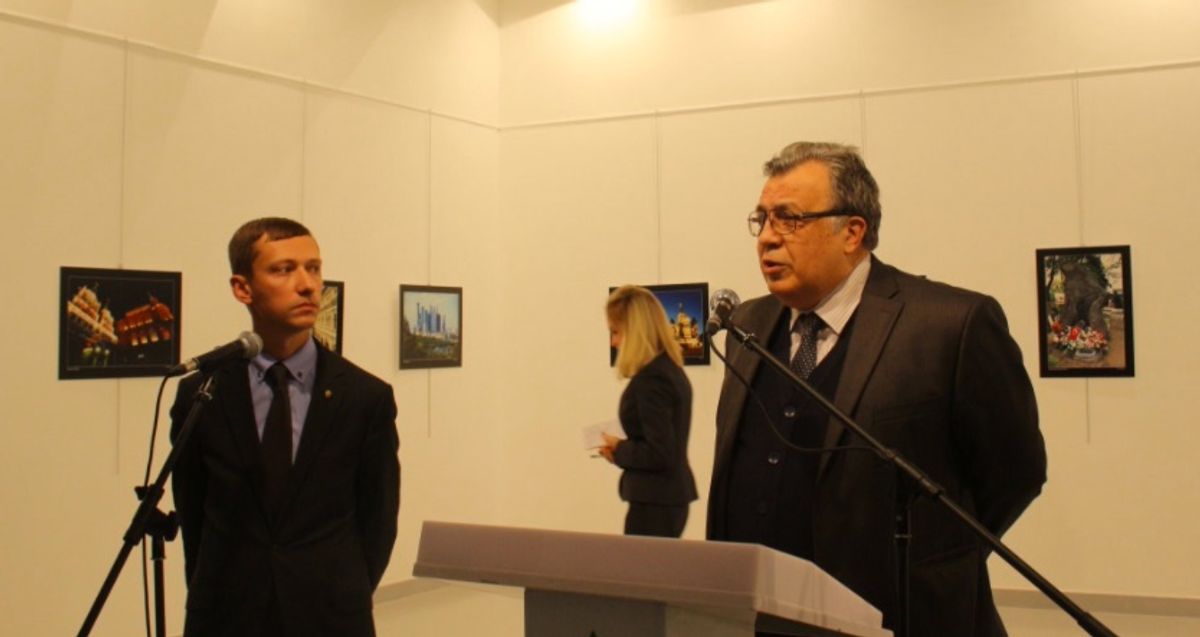 Russian ambassador to Turkey Andrey Karlov was "seriously wounded" in a shooting at the opening of an art exhibition in Ankara on 19 December 2016:

The Russian ambassador to Ankara has been seriously wounded in a gun attack and taken to hospital.

Andrey Karlov has represented Russia in Turkey since 2013.

Initial reports suggested he was making a speech at a photo exhibit in the capital when he was shot in the back.

Three other people were reportedly hurt.

Further gunfire has been heard, according to CNN Turk, and the gunmen is reportedly still at large.

Primary details such as whether there was more than one gunman or Karlov's condition were not immediately reported, although apparent video of the attack later surfaced:

Clear video of the assassination of Russia's ambassador to Turkey, gunman clearly visible. Can someone translate? pic.twitter.com/USPJoS7Rjv

A local news source published a primary account of the attack (roughly translated as follows):

Russian Ambassador Andrei Karlov Gennadiyeviç in Ankara, Contemporary Arts came under armed attack at the opening of an art exhibition at the Centre. It was stated that the ambassador and ... were still inside [as of publication]. Special Operations Police [swept] the building, 15-20 hand guns were heard. It is stated that there is a conflict [ongoing].

Attacks Ankara Contemporary Arts was held during the opening of an art exhibition at the Centre. Following the opening speech from the podium to make Russia 's Ankara Ambassador Andrei Karlov was attacked armed at this time ... Hürriyet Ankara representative said Deniz Zeyrek about the incident said: "Our Ankara Our reporter, photographer about our Office Our reporter Hasim Kilic incident. I had an exhibition of photographs of Çamkatk. Ambassadors are fired into the air offensive before talking. Then he hit the back of the ambassador. Emptied Later hall. Inside, once again ambassador has struck again. Come police claimed that showing a specific ID. a suit and tie and armed walks in any way. the Ambassador and the attacker still inside. police operations in preparation "

The item reported details leading up to the shooting, noting that an attacker voiced grievances involving Aleppo:

The attacker said more about Aleppo. Then he wanted people to go out. As the people went out, they fired a few more [rounds] into the body of the ambassador ... He said that the Contemporary Arts Center's security was [granting entry] by showing a police ID. There were about 100 people in the guesthouse and they were completely evacuated. As the people ran away, the ambassador fired a few more [shots].

Gunman reportedly said, "We will make you for #Aleppo" before shooting Russian Ambassador in #Ankara art gallery. Story developing. #Turkey

Three injuries reported. Shooting has stopped for the moment. Assassin may be dead, but no confirmation. #Ankara #Turkey

As of approximately noon EST on 19 December 2016, little additional information about the shooting in Ankara was available. Karlov's condition was reported as "serious."