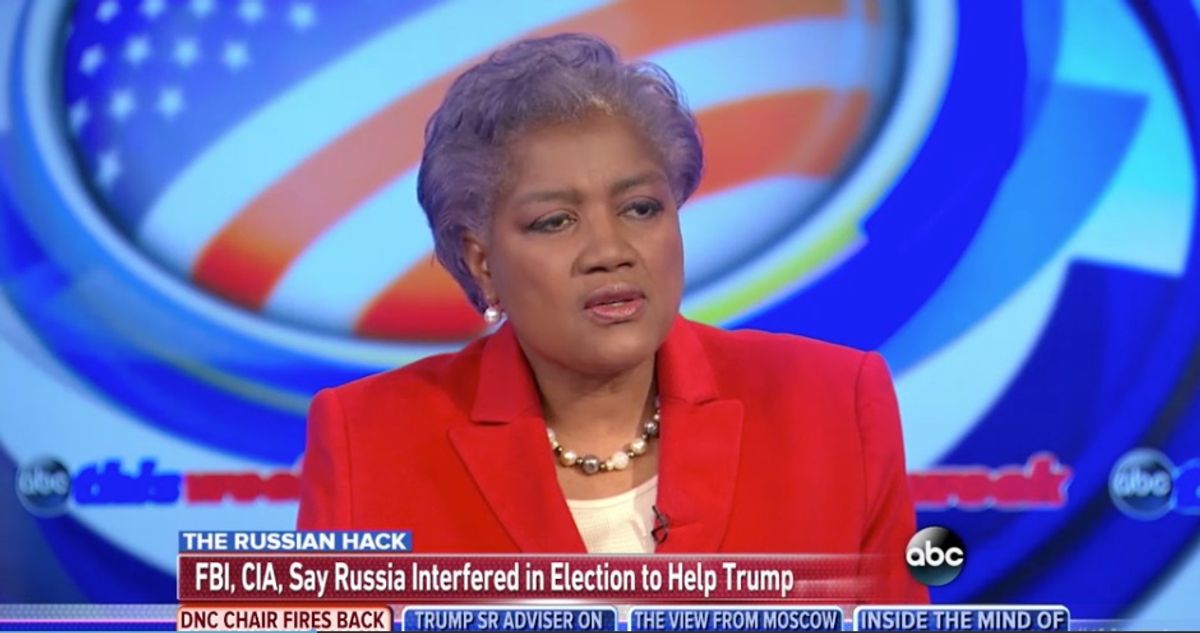 Interim Democratic National Committee (DNC) Chair Donna Brazile maintained during a 18 December 2016 news interview that Russian attempts to hack the DNC's systems continued up until Election Day and beyond:

Brazile asserted that attacks on the DNC's information systems occurred with high frequency even after the 2016 presidential election during an interview with ABC News:

Democratic National Committee Chair Donna Brazile said Russian hackers persisted in trying to break into the organization's computers "daily, hourly" until after the election — contradicting President Obama's assertion that the hacking stopped in September after he warned Russian President Vladimir Putin to "cut it out."

"They came after us absolutely every day until the end of the election. They tried to hack into our system repeatedly," Brazile told ABC's Martha Raddatz in an exclusive interview on "This Week."

ABC News was among many news outlets who noted that Brazile's claim conflicted with a statement given by President Obama during a press briefing a few days earlier. A reporter had queried the President as to whether his administration would more directly address Russian President Vladimir Putin over ongoing allegations that cyberattacks were state-sponsored and whether he believed those efforts were responsible for Hillary Clinton's election loss, asking:

There’s a perception that you're letting President Putin get away with interfering in the U.S. election, and that a response that nobody knows about or a lookback review just won’t cut it. Are you prepared to call out President Putin by name for ordering this hacking? And do you agree with what Hillary Clinton now says, that the hacking was actually partly responsible for her loss? And is your administration’s open quarreling with Trump and his team on this issue tarnishing the smooth transition of power that you have promised?

Noting that "there hasn’t been a lot of squabbling" with respect to the transition process, the President maintained his administration "simply [voiced] the facts, which are that based on uniform intelligence assessments, the Russians were responsible for hacking the DNC, and that, as a consequence, it is important for us to review all elements of that and make sure that we are preventing that kind of interference through cyberattacks in the future." He asserted that the matter should "be a bipartisan issue ... [not] a partisan issue" and "shouldn’t be a source of an argument." He then continued, stating:

Now, with respect to how this thing unfolded last year, let’s just go through the facts pretty quickly. At the beginning of the summer [in 2016], we’re alerted to the possibility that the DNC has been hacked, and I immediately ordered law enforcement as well as our intelligence teams to find out everything about it, investigate it thoroughly, to brief the potential victims of this hacking, to brief on a bipartisan basis the leaders of both the House and the Senate and the relevant intelligence committees. And once we had clarity and certainty around what, in fact, had happened, we publicly announced that, in fact, Russia had hacked into the DNC.

In his lengthy response, the President implied the news media had a hand in shaping the story of Russian influence on the election and denied that the White House had ever claimed that the reported interference had any effect on the election's outcome:

And at that time, we did not attribute motives or any interpretations of why they had done so. We didn’t discuss what the effects of it might be. We simply let people know — the public know, just as we had let members of Congress know — that this had happened.

And as a consequence, all of you wrote a lot of stories about both what had happened, and then you interpreted why that might have happened and what effect it was going to have on the election outcomes. We did not. And the reason we did not was because in this hyper-partisan atmosphere, at a time when my primary concern was making sure that the integrity of the election process was not in any way damaged, at a time when anything that was said by me or anybody in the White House would immediately be seen through a partisan lens, I wanted to make sure that everybody understood we were playing this thing straight — that we weren’t trying to advantage one side or another, but what we were trying to do was let people know that this had taken place, and so if you started seeing effects on the election, if you were trying to measure why this was happening and how you should consume the information that was being leaked, that you might want to take this into account.

And that's exactly how we should have handled it. Imagine if we had done the opposite. It would have become immediately just one more political scrum. And part of the goal here was to make sure that we did not do the work of the leakers for them by raising more and more questions about the integrity of the election right before the election was taking place — at a time, by the way, when the President-elect himself was raising questions about the integrity of the election.

Then President Obama appeared to differentiate what may have been Russian interference from the actions of the WikiLeaks web site, a distinction not commonly made in most news pertaining to the controversy. Stating that negative information about Clinton was "already out ... in the hands of WikiLeaks," he drew a clear line between the leaking of e-mails by WikiLeaks and direct tampering in the election process itself by hackers:

And, finally, I think it's worth pointing out that the information was already out. It was in the hands of WikiLeaks, so that was going to come out no matter what. What I was concerned about, in particular, was making sure that that wasn’t compounded by potential hacking that could hamper vote counting, affect the actual election process itself.

After Brazile's claim that such cyberattacks occurred through and even after the 8 November 2016 election, some news outlets noted that her statement directly conflicted with one made by President Obama just days earlier, when he said:

And so in early September [2016], when I saw President Putin in China, I felt that the most effective way to ensure that that didn’t happen was to talk to him directly and tell him to cut it out, and there were going to be some serious consequences if he didn’t. And, in fact, we did not see further tampering of the election process. But the leaks through WikiLeaks had already occurred ... This was not some elaborate, complicated espionage scheme. They hacked into some Democratic Party emails that contained pretty routine stuff, some of it embarrassing or uncomfortable, because I suspect that if any of us got our emails hacked into, there might be some things that we wouldn’t want suddenly appearing on the front page of a newspaper or a telecast, even if there wasn’t anything particularly illegal or controversial about it. And then it just took off.

And that concerns me. And it should concern all of us. But the truth of the matter is, is that everybody had the information. It was out there. And we handled it the way we should have.

Last point — and the reason I’m going on here is because I know that you guys have a lot of questions about this, and I haven't addressed all of you directly about it. With respect to response, my principal goal leading up to the election was making sure that the election itself went off without a hitch, that it was not tarnished, and that it did not feed any sense in the public that somehow tampering had taken place with the actual process of voting. And we accomplished that.

So much common agreement on basic facts of Russian hacking. That should be enough to conduct a bipartisan House-Senate investigation. pic.twitter.com/2x4TqBVOEz

Donna Brazile has not commented on the discrepancy between her claim that purported Russian tampering occurred through November 2016 and President Obama's assertion that no such activity was observed after his September 2016 meeting with Vladimir Putin, although the President did seem to distinguish between "election tampering" and "e-mail leaks."