Kellogg's decision to discontinue ads on the web site Breitbart led to the #DumpKelloggs hashtag and calls for a boycott. 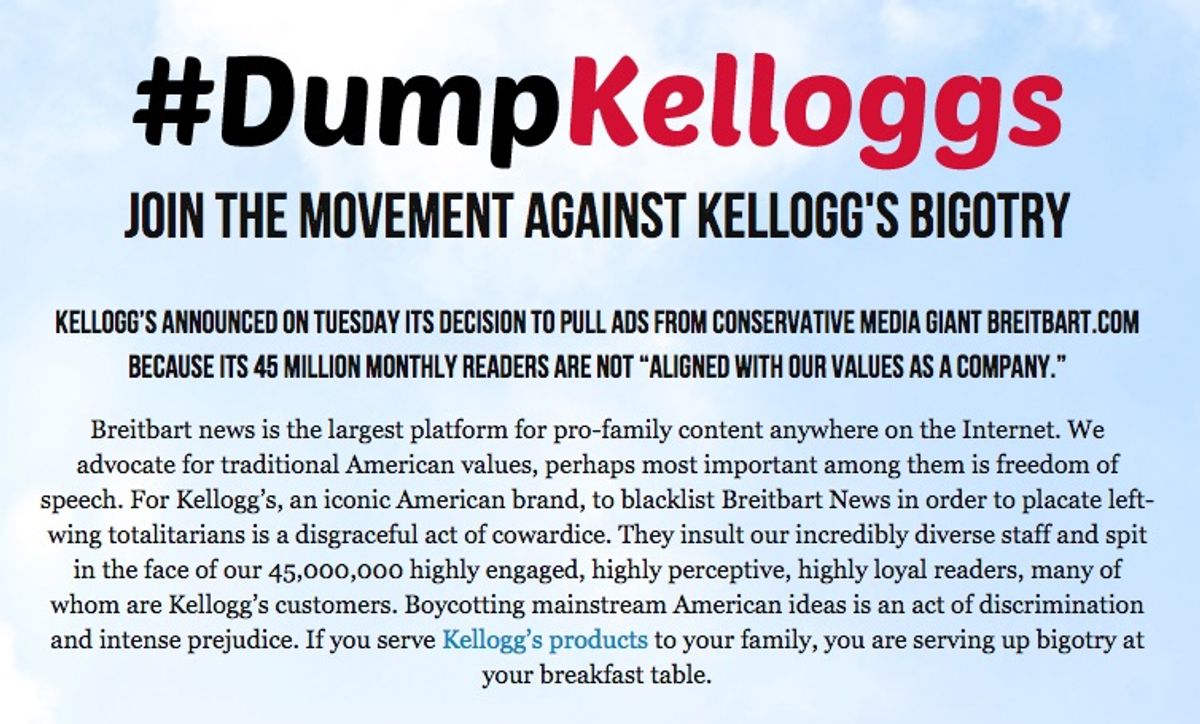 On 29 November 2016, a spokesman for the brand Kellogg's announced that it would no longer be placing advertisements on the web site Breitbart after receiving consumer complaints about the outlet's content:

Kellogg has announced that it will no longer advertise on Breitbart.com, the website formerly run by one of President-elect Donald Trump's top aides, Steve Bannon.

The food manufacturer decided to discontinue advertising on the site as soon as it was alerted by consumers to the presence of its ads, Kellogg Co. spokeswoman Kris Charles said [on 29 November 2016].

"We regularly work with our media buying partners to ensure our ads do not appear on sites that aren't aligned with our values as a company," Charles said.

Breitbart was not pleased with the announcement, insinuating that the repercussions of the decision would be unpleasant for Kellogg's and describing the move in a statement as "un-American":

"Kellogg's decision to blacklist one of the largest conservative media outlets in America is economic censorship of mainstream conservative political discourse," it said in a statement. "That is as un-American as it gets."

In response to the announcement, the outlet also began a #DumpKelloggs petition asking readers to "join the movement against Kellogg's bigotry":

Kellogg’s announced on Tuesday its decision to pull ads from conservative media giant Breitbart.com because its 45 million monthly readers are not “aligned with our values as a company.”

Breitbart news is the largest platform for pro-family content anywhere on the Internet. We advocate for traditional American values, perhaps most important among them is freedom of speech. For Kellogg’s, an iconic American brand, to blacklist Breitbart News in order to placate left-wing totalitarians is a disgraceful act of cowardice. They insult our incredibly diverse staff and spit in the face of our 45,000,000 highly engaged, highly perceptive, highly loyal readers, many of whom are Kellogg’s customers. Boycotting mainstream American ideas is an act of discrimination and intense prejudice. If you serve Kellogg’s products to your family, you are serving up bigotry at your breakfast table.

Although #DumpKelloggs topped Twitter's trending list after the petition was launched, not all sentiment from social media was negative. Some users pledged support, and Kellogg's responded:

@KelloggsUS thank you for discontinuing ads on Breitbart. Many are appreciative - I'm sharing on Facebook and lots of positive responses. — Jill Paperno (@JPaperno) November 30, 2016

@danberkley1 Thank you for the love. Dan! This made our day. We love you right back!

As of the morning of 1 December 2016, Breitbart News claimed that more than 100,000 people had signed the #DumpKelloggs petition. The Kellogg's Twitter account did not appear to respond to the hashtag or users complaining about the advertising decision.