President Park Geun-hye is facing public anger over a shadowy close friend and adviser that critics call a cult figure. 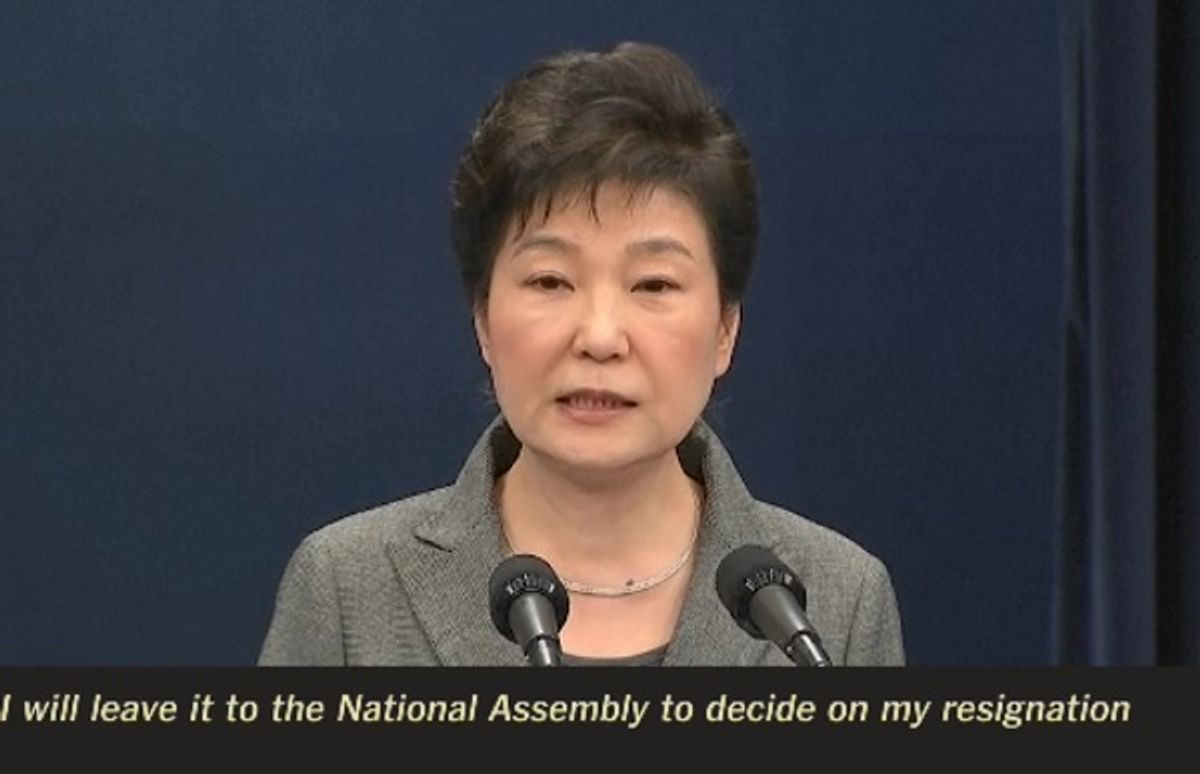 On 29 November 2016, South Korean president Park Geun-hye (the country's first female president) announced that she was willing to resign under the imminent threat of impeachment before the end of her term.

The scandal involves accusations of corruption, and that a shadowy close friend to the president has been extorting business leaders — but it is also based on bizarre accusations that the friend (a woman named Choi Soon-sil) is a cult-like figure with undue influence in government while holding no public office or security clearance:

The 60-year-old is said to have influenced Ms Park in private on everything from her wardrobe to her strategy on tackling the North Korean regime.

She is also accused of forming an exclusive clique of unofficial advisers called “the eight fairies”, which has enjoyed extensive access to the president.

Choi is the daughter of Choi Tae-min, a man known as the leader of what has been described as a murky religious cult. His relationship with Park goes back years:

He referred to himself as the "Future Buddha" and established a sect called the Eternal Life Church. Ms Park has publicly described herself as Catholic.

The elder Choi reportedly enjoyed considerable influence over Ms Park as a young politician, prompting diplomats to refer to him in private as “Korea’s Rasputin.”

A newly released Wikileaks cable from the US embassy in Seoul described him as having “complete control over the body and soul of the president in her formative years” in 2007.

Both women are understood to have met decades ago and formed a close relationship when Ms Choi’s father allegedly helped the future president contact her late mother in the afterlife.

Choi reportedly enjoys a great deal of influence in the government, despite the fact she holds no official office. Citing a Korean-language newspaper, The Telegraph noted that Choi is in Germany and claims to be too ill to return to South Korea as Park faces the prospect of impeachment and a criminal investigation:

I am suffering from a nervous breakdown and I have been diagnosed with heart issues. If I recover, I will ask for forgiveness, and will accept punishment if I did anything wrong.

While the South Korean constitution prevents Park from being indicted while in office, prosecutors allege she acted as an accomplice in Choi's extortion of millions from businesses. Her political opponents say her offer to resign is a ploy, and plan to continue with the impeachment process.

Protests against Park (and Choi) have drawn hundreds of thousands to the streets.