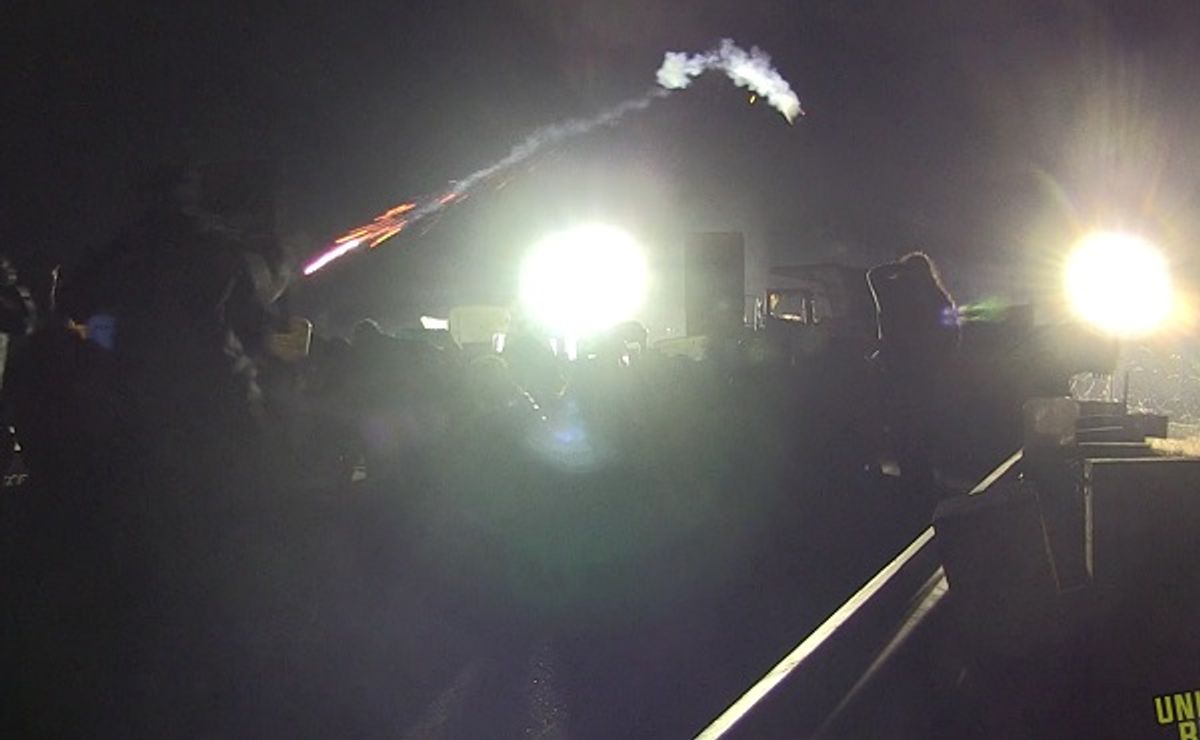 On 20 November 2016, the Dakota Access pipeline protests reached new proportions when an ongoing demonstration turned into a violent confrontation between protesters and law enforcement officials.

Pipeline protesters say 21-year-old Sophia Wilansky was critically injured when she was struck with a concussion grenade thrown by Morton County sheriff's deputies while she was handing out water.  As a result, she has been hospitalized and now faces the prospect of having her left arm amputated.

On 21 November 2016, Wilansky's father, Wayne Wilansky, released extremely graphic photographs of her badly damaged arm, showing exposed bone and muscle. (We will link to them here, but caution that they are disturbing.) He told reporters that she may need as many as 20 surgeries, and that aside from her arm injury, Sophia had welts all over her body from being shot by rubber bullets, and that it took hours for an ambulance to reach her because of roadblocks:

In a statement released by Wilansky through her father, she says police were throwing concussion grenades directly at people. One exploded as it struck her, destroying major portions of her left forearm:

At around 4:30am after the police hit the bridge with water cannons and rubber bullets and pepper spray they lobbed a number of concussion grenades which are not supposed to be thrown at people directly at protesters or protectors as they want to be called. A grenade exploded right as it hit Sophia in the left forearm taking most of the undersurface of her left arm with it. Both her radial and ulnar artery were completely destroyed. Her radius was shattered and a large piece of it is missing. Her medial nerve is missing a large section as well. All of the muscle and soft tissue between her elbow and wrist were blown away. The police did not do this by accident - it was an intentional act of throwing it directly at her. Additionally police were shooting people in face and groin intending to do the most possible damage. Sophia will have surgery again tomorrow as bit by bit they try to rebuild a somewhat functioning arm and hand. The first surgery took a vein from her leg which they have implanted in her arm to take the place of the missing arteries. She will need multiple surgeries to try to gain some functional use of the arm and hand. She will be, every day for the foreseeable future, fearful of losing her arm and hand. There are no words to describe the pain of watching my daughter cry and say she was sorry for the pain she caused me and my wife. I died a thousand deaths today and will continue to do so for quite some time. I am left without the right words to describe the anguish of watching her look at her now alien arm and hand.

We have been unable to reach Morton County Sheriffs, but video showing police spraying protesters, or "water protectors," with water cannons amid freezing North Dakota winter temperatures were circulated widely:

At the end of the clip, they try to shoot drone w/ water cannon#NoDAPL pic.twitter.com/N0S1Sic2TQ

Police blame Wilansky's injury on protesters. While we could not reach local law enforcement, the Morton County Sheriff's Department released a statement on Facebook on 23 November 2016, saying the injury was caused by an exploding propane canister that protesters were handling. They later removed the post.

But Wayne Wilansky told us that statement was false. Sophia had no burns on her. And while a major portion of her lower arm was blown out, her hand was still attached by the ulna bone, making the claim she was the victim of a fiery explosion seem unlikely. He said she was totally lucid after being injured and recounted being struck by a grenade-like object that exploded on contact with her arm.

I wouldn’t put anything past the police at that location. They clearly have made up things every step of the way.

He referred to the statement of witness Stephen Joachinson, who told the Guardian he was talking to Sophia when police warned on a bullhorn they were about to start using less-than-lethal force:

“They threatened that they were going to shoot us with less-than-lethal force and within 20 seconds of that warning they just started firing on us,” he said.

“When she got hit with the rubber bullet she was hurt and she was scared and she ran back, and that’s when they hit her with the concussion grenade and it blew up right on her arm,” Joachinson said.

According to Standing Rock Medic and Healer Council (a group of medical volunteers that provide emergency field medicine to the encampment), police targeted protesters throughout the night, resulting in multiple cases of hypothermia:

Police continuously assaulted demonstrators with up to three water cannons for the first 7 hours of this incident in subfreezing temperatures dipping to 22F (C) causing hypothermia in the majority of patients treated. Chemical weapons in the form of pepper spray and tear gas were also used extensively, requiring chemical decontamination for nearly all patients treated and severe reactions in many. Projectiles in the form of tear gas canisters, rubber bullets, and concussion grenades led to numerous blunt force traumas including head wounds, lacerations, serious orthopedic injuries, eye trauma, and internal bleeding.

A total of 26 protesters were hospitalized and more than 300 were injured, according to media reports. Lorenzo Serna, a journalist with Unicorn Riot, said he witnessed several injuries:

I watched people collapsing and being carried away by medics and other people at the front. It was a steady stream of wounded being taken back to the triage point in the big Oceti Sakowin camp.

Activists and members of the Standing Rock Sioux Nation have been encamped at the construction site since April, protesting the project's potential destruction of sacred sites and contamination of the Missouri River (the reservation's main water source) from a pipeline leak. Dallas-based Energy Transfer Partners wants to lay pipe underneath the river.

Sophia Wilansky's friends are raising funds for her medical treatment and recovery here. Her father said despite her serious injury, Sophia is in good spirits, and wishes she were able to return to Standing Rock.

No one from the state or county has returned repeated phone messages or e-mails seeking comment on the incident.