According to its creators, the controversial billboard in Pearl, Mississippi was intended to provoke a political discussion. 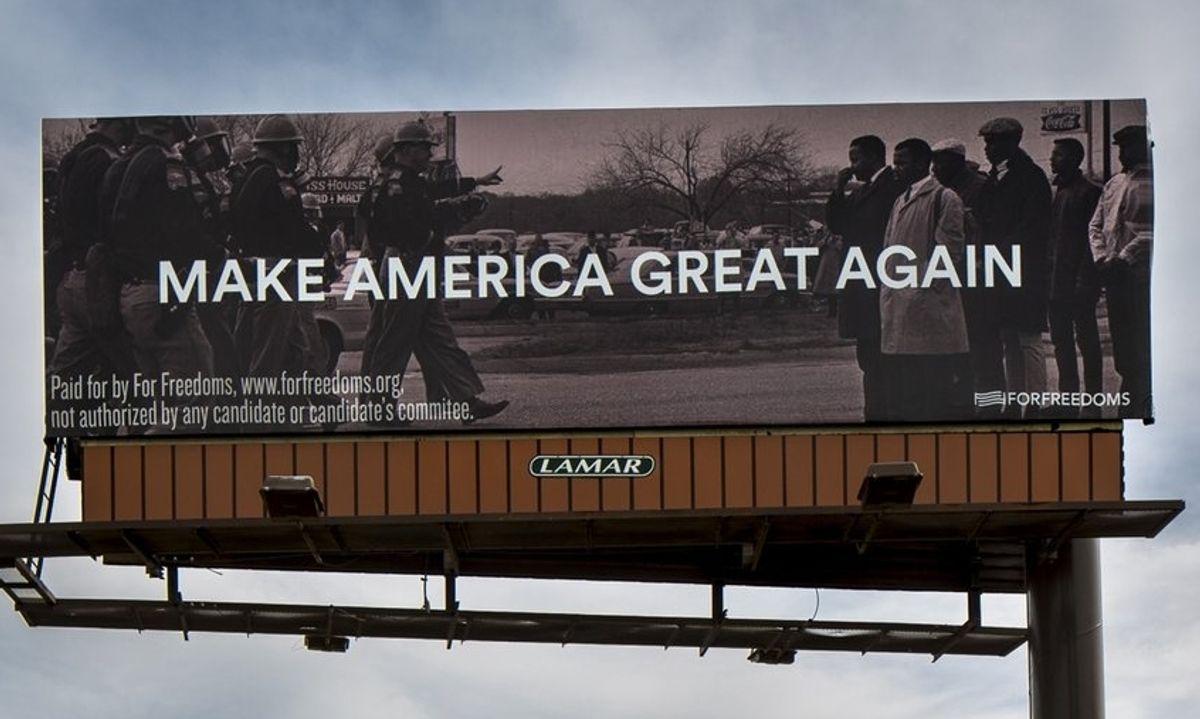 Image Via For Freedoms

On 21 November 2016, not long after a group billing itself as the "first artist-run super PAC" claimed responsibility for erecting a billboard in Pearl, Mississippi combining the slogan "Make America Great Again" with a 1965 photograph of a civil rights march in Selma, Alabama, someone covered the sign with a black tarp.

The historical photograph used in the billboard was taken moments before Alabama state troopers attacked black protesters with tear gas and billy clubs on Selma's Edmund Pettus Bridge in a violent confrontation that would become known as "Bloody Sunday."

The state's governor, Phil Bryant, had called the billboard "divisive." The city's mayor, Brad Rogers, had vowed to have it removed.  Local residents interviewed by WLBT in Jackson disagreed about what the billboard could possibly mean:

"It could mean that they're acknowledging police brutality and they want to do something about it, or it could be racist," one man said.

"I mean, it could be taken racist, but I think it's there to show that cops are there to protect you, and they're there to help you," Madison Hall told WLBT.

Madeline Nixon was completely unsure of the billboard's intent. "I don't really know what to think," she said.

The organization behind the billboard calls itself For Freedoms, and says the main point of the display was to inspire a political discussion. "As the first artist-run super PAC," reads a manifesto on the group's web site, "For Freedoms uses art to inspire deeper political engagement for citizens who want to have a greater impact on the American political landscape." Member artist Hank Willis Thomas told AL.com that the billboard was an attempt to give voice to a question implied but unanswered in Donald Trump's campaign slogan, "Make America Great Again":

"One question that never came up with the President-Elect was, when are you talking about?" Thomas said. "The Cold War? The crack and AIDS epidemic? Interning Japanese citizens? The Depression? The Civil War?  When was this time you want the country to go back to? There's never been a greater time for more citizens than right now."

For Freedoms co-founder Eric Gottesman told CNN that the project's intended meaning was neither ironic nor satirical, nor was it anti-Trump or anti-Clinton, but rather anti-rhetoric:

"What we hear today in some political rhetoric is that making America great means enforcing a single vision on America," he said. "What we're trying to do is use art to provoke people to talk about these things and bring them to a different kind of conversation, one that goes beyond symbolic gestures of what America is supposed to stand for."

Be that as it may, the billboard was evidently deemed too provocative for its own good, and is now history.