In 2003, WIlliam Pryor filed a legal brief arguing that states should be able to enforce laws against homosexual activity, even if it is consensual and private. 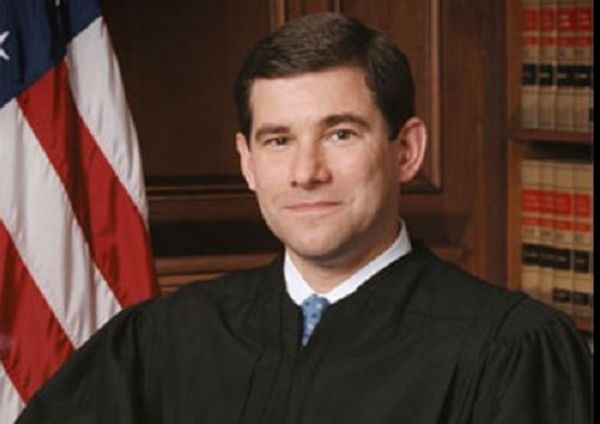 On 23 September 2016, then-presidential candidate (and current President-Elect) Donald Trump announced his list of potential choices to fill a vacant seat on the U.S. Supreme Court. His list included a statement that it was "definitive" — that is, that any potential pick would be necessarily drawn from it. Among the names on Trump's list was that of 11th Circuit U.S. Court of Appeals Judge William H. Pryor, an entry that prompted several news outlets to report on a 2003 brief in which Pryor wrote in support of state-level laws against consensual gay sex.

Donald Trump has given somewhat mixed messages when it comes to LGBT rights and same-sex marriage. During a 13 November 2016 interview on the CBS news program 60 Minutes, Trump said the question of same-sex marriage had been settled with the 2015 landmark Obergefell v. Hodges ruling holding that a fundamental right to marry is guaranteed to same-sex couples by the U.S. constitution. According to the Economist, Trump is probably correct in saying the law will stand:

As a practical matter, Mr Trump is right. Aside from minor skirmishes involving recalcitrant county clerks who refuse to issue marriage certificates to gay couples, there have been no legal challenges threatening Obergefell, and it’s hard to imagine states trying to relitigate the question. Even if the Supreme Court is soon home to a lopsided conservative majority, there is no precedent for the justices completely reneging on a major expansion of a constitutional freedom.

But Pryor's inclusion on the list has raised fears that the rights gained by the LGBT community with the Obergefell decision could be in jeopardy. In 2003, while serving as Alabama's attorney general, Pryor filed an amicus brief in support of a Texas anti-sodomy law in Lawrence v. Texas, arguing that states should be permitted to have laws on the books that criminalize consensual sex between LGBT couples, even when such activity occurs in the privacy of their own homes. (The law was ultimately struck down.)

In short, the States should remain free to protect the moral standards of their communities through legislation that prohibits homosexual sodomy. If legislation of such activity is no longer supported by a majority of the citizens of the States, the legislatures of the States will repeal them, or elected executive officials will cease to enforce them. The recent movement toward decriminalizing homosexual sodomy, even with Bowers v. Hardwick on the books, shows that the legislative system is quite able to respond to popular will without judicial prodding. Impatience with the pace of change, or with the resistance of citizens who do not regard the change as beneficial, does not justify the judicial creation of a new constitutional right.

To support the argument, he discussed several cases in which judges opined that states should have the authority to render gay sex criminal:

In his Poe v. Ullman dissent, which foreshadowed the recognition of the marital right of privacy in Griswold v. Connecticut, Justice Harlan said that homosexual activity, even when “concealed in the home,” was a proper matter of state concern and could be forbidden by the States ...

Not only did Justice Harlan find no fundamental right to homosexual activity, he found a fundamental “pattern ... deeply pressed into the substance of our social life” against such practice. Later in his dissenting opinion, Justice Harlan repeated his position “that adultery, homosexuality, fornication, and incest ... however privately practiced” are subject to state proscription.

Commentators have noted that due to the advanced age of some of the current Supremre Court justices — and Senate Republicans' successful obstruction of President Barack Obama's efforts to install his own nominee, Merrick Garland, on the high court — odds are that President Trump will have multiple seats to fill. He won't necessarily select William Pryor for any of those openings, but the inclusion of Pryor on his list has some observers worried about legal ramifications for the LGBT community in the years ahead. While it's unclear if Pryor personally believes in throwing LGBT people in jail for having consensual sex in the privacy of their homes, in 2003 he did argue in favor of individual states' rights to do so.