U.S. Army Veteran Ernest Walker maintains that a fellow diner's complaint led to the revocation of his complimentary Veterans Day meal at a Chili's restaurant. 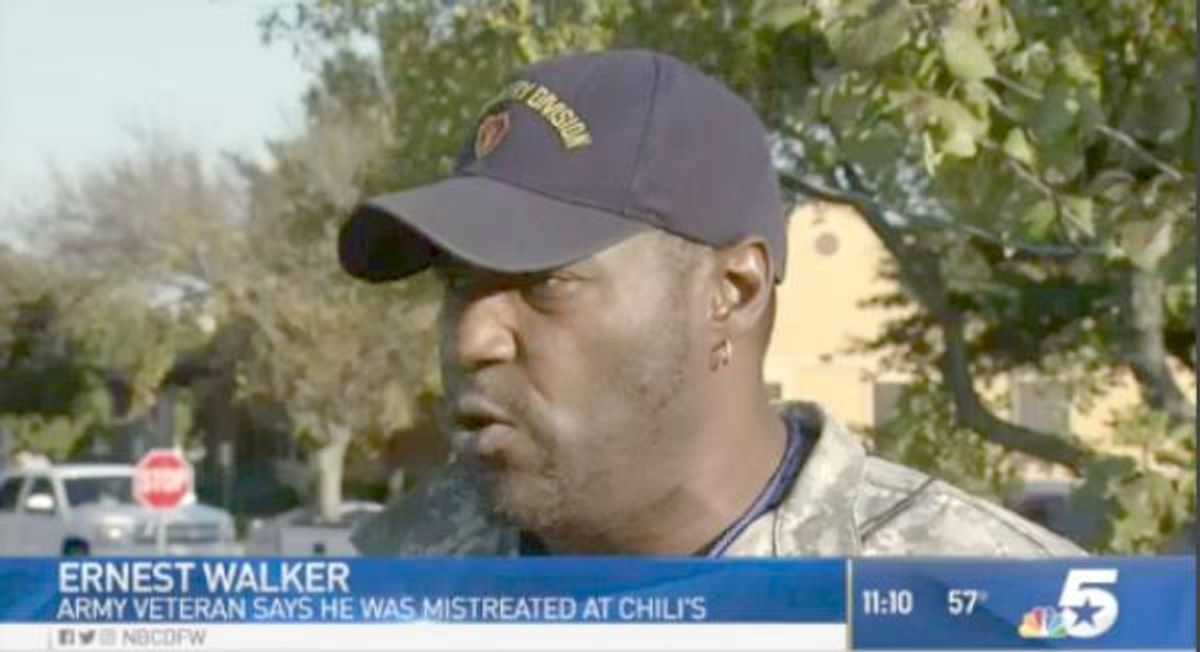 A number of angry social media users have spoken up after U.S. Army Veteran Ernest Walker said that the manager of a Cedar Hill, Texas, Chili's restaurant took back his Veterans Day free meal on 11 November 2016.

Walker published a video to YouTube of the purported confrontation he had with the manager in question, in which the pair quibbled over the contents of a to-go box as well as Walker's service dog:

According to Dallas–Fort Worth station KDFW, Walker maintained that a manager questioned his veteran status, positing that a fellow diner "doubted" his service:

Walker says a manager at the Chili's snatched his to-go box, saying Walker could not prove he is a veteran.

But Walker says he showed him his DD214 and his driver's license, which he also showed KDFW.

He believes it was another customer, an elderly white man, also a veteran, who doubted him.

Walker also spoke to Dallas-Fort Worth station KXAS-TV about the incident, explaining that the argument attracted attention from other diners:

Walker, accompanied by his service dog Barack, said he believes an elderly man wearing an American flag shirt and Trump sticker told the restaurant manager that Walker was wearing his cap indoors and was not a U.S. veteran and should not receive the free meal.

In an encounter captured on video by Walker and posted to Facebook, the manager asked for Walker's military ID, which he provided. Walker also provided his discharge paperwork.

Walker said the manager then took his to-go meal.

"I looked around and I'm embarrassed at this point," Walker said. "People are looking. I'm a soldier. I'm a person and everybody's looking like I stole food."

We are aware of the situation that occurred at our Chili's Cedar Hill restaurant on November 11th. Our goal is to make every guest feel special and unfortunately we fell short on a day where we serve more than 180,000 free meals as a small token to honor our Veterans and active military for their service, hence these actions do not reflect the beliefs of our brand. We are taking this very seriously and the leaders in our company are actively involved with the goal of making it right. Since the incident occurred, we have extended an apology and we are reaching out to the guest.

This is not what we are about. I find it sad and much too prevalent in our society today that we apply the actions of individuals to entire cities and entire groups, and in so doing make the exception the rule. This situation is indeed the exception in Cedar Hill. It is interesting to me that just yesterday afternoon, on the patio at City Hall, we had a ceremony honoring and praying for veterans and their service dogs. We hosted veterans and their service dogs from several cities around Cedar Hill as we honored their service, dedication, training, and hearts of giving. These positives expression of community and unity don’t get the recognition they deserve. I also find it sad that we, as a people, too easily resort to demonstrations to express our frustration and the wrongs of this world rather than taking the harder and more sustainable route of working things out. My concern for the veteran is paramount, but we must also consider the manager and how he can become a better person and perhaps do better the next time he is put in a difficult situation. People do best and learn the most from experience. To learn requires patience and grace, neither of which can occur in the heat of emotion, demonstration, and anger. Please know, this situation is not reflective of our community, nor the way we prefer to handle wrongs.

Walker said that the manager ought to have been "reprimanded or fired," but Chili's has not provided further information about which specific steps they planned to take to "make it right." Walker told the Dallas Morning News that he blamed the post-election climate for the fellow diner's complaint about his status as a veteran, adding:

I do believe that the election has changed the hearts and changed the motives of people so much so that he believed in his heart and mind after talking to the Trump supporter that I was stealing food.

As of 13 November 2016, Walker had requested a more personal apology from Chili's and said that the chain had not "validated" him "publicly." Walker's complaint deviated from more common "shunned serviceman" stories, as the treatment he described was not based on his military service (but rather doubt that he was a veteran).