During a campaign speech Donald Trump read a letter from Patriots coach Bill Belichick and claimed that QB Tom Brady voted for him. 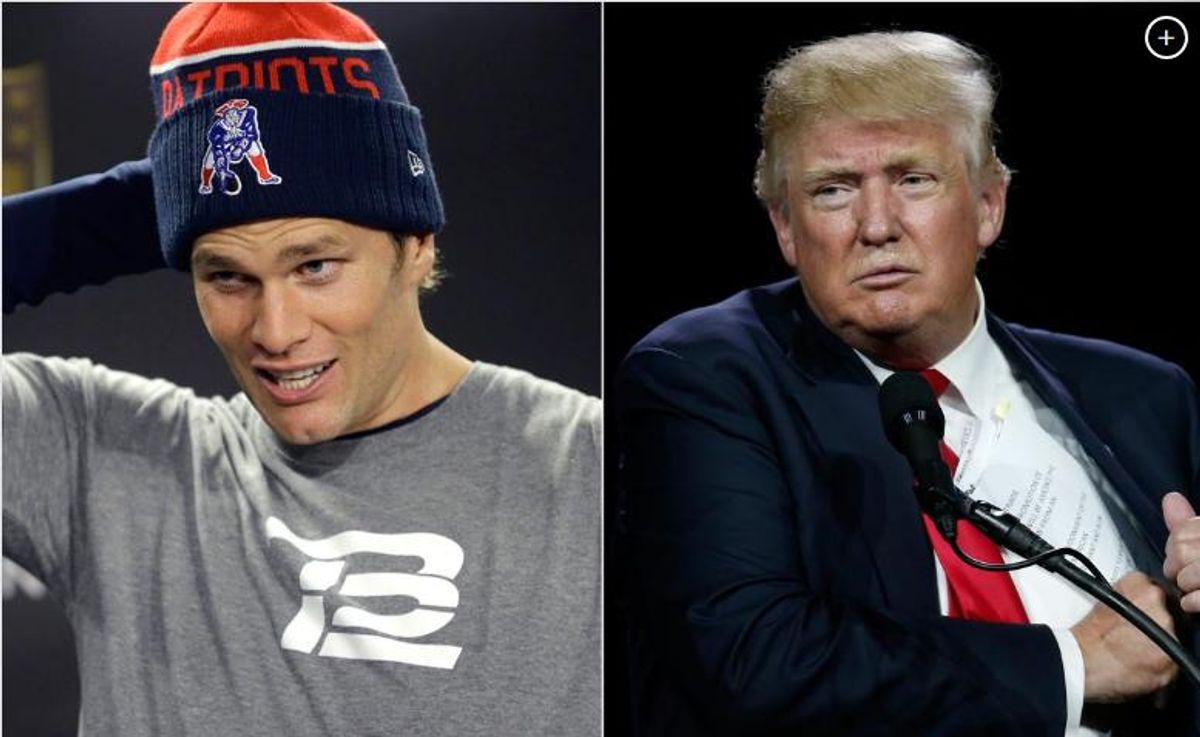 Two people I have a lot of respect for. Really like as people. Credible people. And since there so important to the area. I thought I'd give you this information. They told me I could do it so I will do it. Tom Brady, great guy, great guy, great friend of mine, great great champion, unbelievable winner. He called today and he said Donald, I support you. You're my friend and I voted for you. And I want to tell you this guy is a champ and he's a winner and he's a great person. So I said Tom, you voted for me, you support me, am I allowed to say it? And he said if you want to say it you can say it.

I was in the plane and they handed me a letter and it was from coach Belichick. And he wrote me the most beautiful letter and it was only two hours ago so we called back and said do you think Mr. Trump could read that letter to the people of New Hampshire.

He said absolutely if you'd like but do me a favor don't read that letter let me send one that's a little bit different. So I figured that he was going to take all the good things out like most gutless people do. Gutless. But he's the opposite. He's a champ. So he sent me the new letter and it was much better. It was stronger. See most people don't do that they're the opposite. They see gee I don't want to get involved.

This guy is a true champ so he writes, Coach Belichick,

“Congratulations on a tremendous campaign. You have to help with an unbelievable slanted and negative media and have come out beautifully. You have proven to be the ultimate competitor fighter. Your leadership is amazing. I have always had tremendous respect for you for the toughness and perseverance you have displayed over the past year is remarkable. Hopefully tomorrow’s election, the results will give the opportunity to make America great again.

Some viewers expressed skepticism about Trump's claim, stating that Belichick's letter sounded like something Trump would write himself. Furthermore, Trump's introduction to the letter, explaining how Belichick sent one letter a few hours before the speech but then sent a second more "beautiful" letter at the Trump campaign's request, was a tad confusing.

However, it appears that the letter is genuine.

Bill Belichick did indeed write Donald Trump a letter. The letter Trump read from Belichick is accurate. Those were Bill's words. #WBZ

While Belichick did write a letter supporting Trump, the claim that Tom Brady voted for the GOP candidate has not been verified. The Boston Globe reported that the claim is at least plausible, since Brady did cast his vote on 7 November 2016, before Trump made his speech:

However, Brady's wife Gisele Bundchen disputed the claim that her husband supported the Republican presidential candidate. The supermodel responded "NO!" to a comment on her Instagram page asking if she and her husband were supporting Donald Trump: