More than a decade after it was unearthed, an enigmatic rock may turn out to preserve the first fossilized dinosaur brain tissue ever discovered. 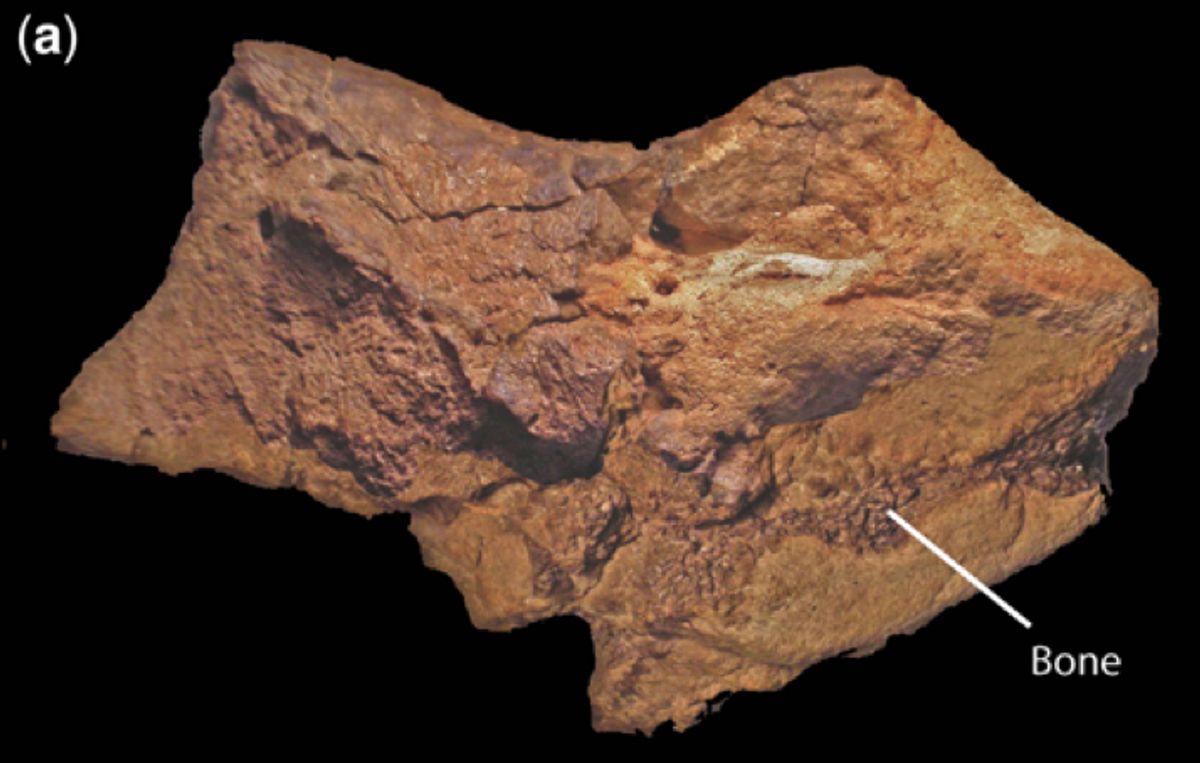 On 27 October 2016, a group of scientists published a study in a special publication of the Geological Society of London that used high-resolution scanning electron microscope images of a rock suspected of preserving some structures of a 133-million-year-old dinosaur’s brain. More impressive still, the scientists found that some tissue of the brain had been remineralized at the microscopic level, revealing the actual cellular structures of brain tissue, as reported in a University of Oxford press release:

The fossil, most likely from a species closely related to Iguanodon, displays distinct similarities to the brains of modern-day crocodiles and birds. Meninges — the tough tissues surrounding the actual brain — as well as tiny capillaries and portions of adjacent cortical tissues have been preserved as mineralised ‘ghosts’.

This discovery would be the first ever case of preserved dinosaur tissue, as the researchers noted in their paper:

To our knowledge, [this specimen] is the first described example of mineralized brain soft tissues from a fossilized terrestrial vertebrate.

The preservation of any soft tissue is extremely rare — under most conditions decomposition removes anything organic before the specimen can be preserved as a mineralized fossil. In this case, the authors of the study are not arguing that the actual, original tissue molecules have been preserved (although this may happen in rare cases), but rather that the brain was replaced with minerals at a level of detail so fine that molecular structures remain preserved:

Comparisons drawn with brain-associated soft tissues in living species suggest that portions of the tissue space between the braincase wall and tough tissues (meninges) surrounding the brain itself were mineralized by siderite early in the decay process. The actual meninges (meningeal and arachnoid maters) appear to have been preserved by phosphate replacement of the original tissues (including some of the larger blood vessels that may be lined or infilled by microcrystalline siderite).

The specimen was discovered in 2004 by a fossil hunter who immediately suspected it might preserve some evidence of an ancient creature’s brain, as reported by the Washington Post's Sarah Kaplan:

The rock was uncovered by fossil hunter Jamie Hiscocks, who caught it in the glow of his flashlight one night while prowling a British beach after a storm. The tiny specimen, which is rusty brown with oxidized minerals, immediately jumped out at him. It looked like an endocast — a fossil that forms when rock fills in the empty space in a dinosaur's skull, creating a mold of the cavity where its brain once was.

Hiscocks brought the fossil to University of Oxford paleobiologist Martin Brasier, who confirmed his suspicion. But Brasier also noticed something else: a network of fine corrugations and wrinkles on the surface of the rock that couldn't have formed from geologic processes.

Braiser, who died in 2014 before the research was completed, showed the specimen to an Iguanodon dinosaur expert, David Norman, who agreed that the specimen likely belonged to the early Cretaceous giant. Norman and others analyzed the fossil using an SEM at the Natural History Museum of London, which confirmed a thin layer of permineralized brain tissue.

The challenge, then, was to explain how this tissue could have been preserved at all. The researchers proposed a sort of “pickling” mechanism where highly acidic, low-oxygen conditions helped rapidly mineralize the brain matter, as described in the Oxford press release:

According to the researchers, the reason this particular piece of brain tissue has been so well-preserved is that the dinosaur’s brain was essentially ‘pickled’ in a highly acidic and low-oxygen body of water — similar to a bog or swamp — shortly after its death. This allowed the soft tissues to become mineralised before they decayed away completely, so that they could be preserved.

Not everyone is convinced by the scientist's proposed explanation of the mechanism preserving the brain tissue. In the Washington Post, Mary Schweitzer, an evolutionary biologist at North Carolina State University and the North Carolina Museum of Natural Science as well as an expert on soft tissue preservation, said:

The idea that you can have a brain preserved without any kind of surrounding bone is really hard for me to accept,” she said. “And I think the other possibilities have not been eliminated.”

If the scientists' findings are confirmed by other researchers, this rock may well be the first terrestrial vertebrate brain tissue ever described, but it would not be the first preserved brain tissue ever found. In 2012, scientists described the brain structure of a 520-million- year-old bug-like, proto-insect sea creature—an anthropod—in great detail. In 2015, that same team used SEM techniques similar to those in the dinosaur study to reveal preserved cellular structures in that specimen from that creature's brain.