How Should Voters Respond to Unlicensed 'Poll Watchers'?

An image circulating online tells voters to photograph anyone trying to challenge them at the polls. 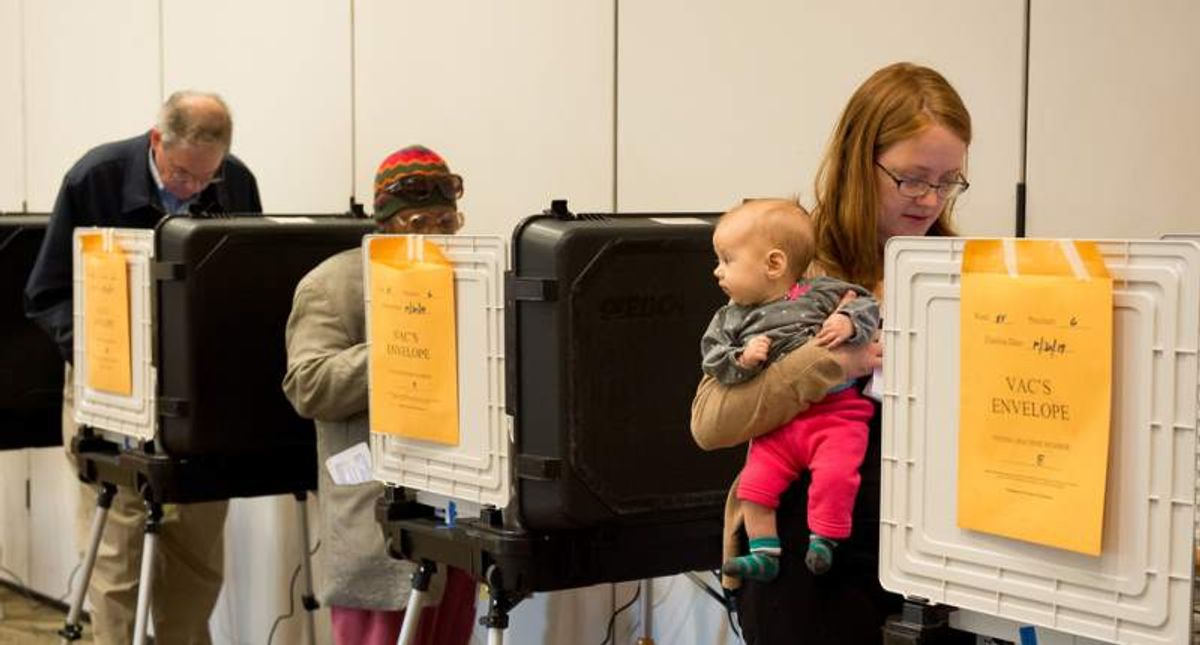 Perhaps in response to Republican presidential candidate Donald Trump's solicitation for "election observers" to (in the Trump campaign's words) "Help Stop Crooked Hillary from Rigging This Election," an image has been widely circulated online that informs voters what they should if a "poll watcher" tries to interfere with their casting a ballot on election day: Though the same phone numbers are listed for both agencies (the FBI and the DOJ), they actually belong to the Department of Justice's Civil Rights Division, which enforces "the civil provisions of the federal laws that protect the right to vote, including the Voting Rights Act, the Uniformed and Overseas Citizens Absentee Voting Act, the National Voter Registration Act, the Help America Vote Act and the Civil Rights Acts." The FBI also investigates civil rights violations, and forwards its findings to the Justice Department.

Another version of the image circulated on Pinterest is slightly more accurate, since it lists the number for an FBI field office in Pennsylvania: According to the FBI, complaints regarding voter intimidation (among other voting law violations) should be referred to their Public Integrity Section, as well as of their field offices around the country. Several social advocacy groups, including the Lawyers' Committee for Civil Rights, have also banded together to form the Election Protection coalition, a non-partisan group offering voters guidance against intimidation tactics and other issues.

As the progressive think tank Demos points out, ten states (Colorado, Florida, Missouri, Nevada, New Hampshire, North Carolina, Ohio, Pennsylvania, Texas, and Virginia) currently have laws regulating when a vote can be challenged. But the quotation marks around "poll watchers" in the image suggests that it actually concerns people taking to heart rhetoric from Republican presidential nominee Donald Trump:

You've been reading the same stories as I've been reading, so go to your place and vote, and then go pick some other place, and go sit there with your friends and make sure it's on the up and up. Because you know what? That's a big, big problem in this country, and nobody wants to talk about it. Nobody has the guts to talk about it. So go and watch these polling places. Make sure it’s on the up and up. Please. That would one hell of a way to lose.

That kind of threat carries extra weight in the key state of Pennsylvania, which has an especially vague state law regarding voter challenges:

Poll watchers can’t get near voters as they’re voting, but they can watch them check in. Many poll watchers do this simply to alert their respective parties about who hasn’t voted, so that the parties can urge their loyalists to get to the polls. But the other thing poll watchers can do is challenge a voter’s legitimacy before he casts a ballot. The law is clear, albeit broad: Watchers are “entitled to challenge any person making application to vote and to require proof of his qualifications.”

Though such challenges are rare, say election officials in several Pennsylvania counties, it is nevertheless much easier to issue a challenge than it is to answer one. The burden of proof is on the voter, who then has to either vote on a provisional ballot or find a witness who lives in the same precinct (say, a friend, spouse or neighbor) to sign an affidavit vouching for the voter’s identity and residence.

That’s alarming to the Brennan Center for Justice, which has recommended that states abolish Election Day voter challenges. “I think there are much more effective, less confrontational, and less risky ways to ensure the integrity of our elections,” says Weiser. The Brennan Center has urged Pennsylvania’s secretary of state to guard against abuse of its challenge rules, which date from 1937. “Unfortunately, Pennsylvania’s challenger law doesn’t have a lot of specificity about what proof you need to have and how you do it.”

Kristen Clarke, president and executive director of the Lawyers' Committee, told snopes.com in an interview on 12 October 2016 that though there is "no clean and easy answer" regarding taking pictures of voters inside a polling place, the best thing for the public to do is to report any "untrained individual" hovering near them at the polls or around a polling site to both on-site officials and her organization:

Neither the Department of Justice nor the FBI has yet responded to our requests for comment.

Another group, Vote Protectors, announced its intention to conduct exit polls and identify "voter fraud." The group's web site contained not only instructions for constructing "I.D. badges," but also for users to stream video of their activities at poll sites.

The copyright for the group's site is listed as belonging to Stop the Steal, an organization led by Trump ally Roger Stone. When asked about the Vote Protector "badge" and video tools, he said that he ordered both of those sections removed:

Bad idea, as is video taping. First I have heard of it. I am only interested in a valid, scientifically conducted exit poll.