A viral clip of a Hurricane Matthew satellite map depicting the storm 'looping' to hit Florida twice was one of many speculative storm scenarios (but not an official forecast). 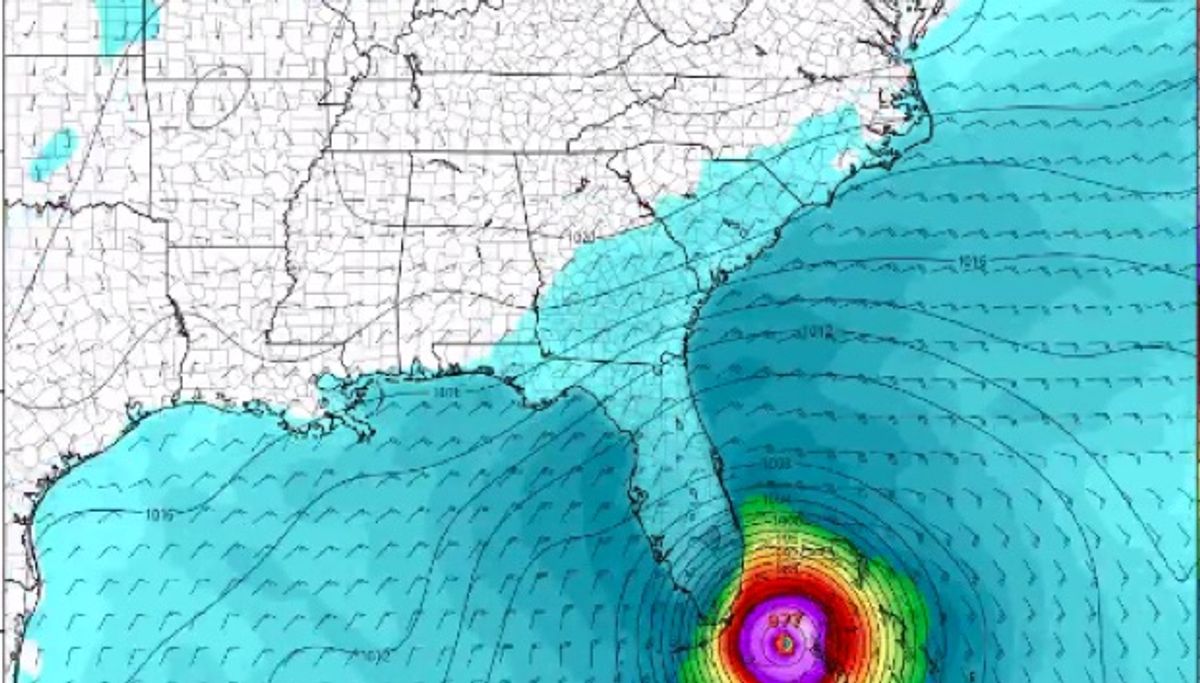 On 5 October 2016 Tampa-area meteorologist Paul Dellegatto shared what would become a viral satellite map, depicting a Hurricane Matthew "loop" scenario in which the storm would circle back to hit Florida twice:

Most of the models now show the next trough missing Matthew which could leave the hurricane behind — so much so that it could do a loop east of Florida next week. In all likelihood, it will not be as dramatic as the GFS run from Tuesday night (below), but it is yet something else to watch!

Against the backdrop of evacuations and close monitoring of Hurricane Matthew, the looping satellite projection prompted predictable concerns (particularly among residents living along Florida's coasts). It wasn't uncommon for viewers to presume meteorologists were sharing this information as an actual weather forecast on Facebook and Twitter, where many users posted the clip without more than 140 characters of explanation.

However, longer articles about Matthew's trajectory clarified that the worrisome loop clip was simply one of several possible paths the storm might take in coming days:

A gradual turn to the northwest is expected Wednesday, and the exact angle and speed of that turn has enormous implications for Florida; this hurricane has the potential to severely impact 350 miles of the state’s coastline. Although the bulk of the heavy rain associated with Matthew is forecast to remain offshore, some areas near the coast could see up to 10 inches, so localized flooding is a serious concern.

The expected track will also bring storm surge to a very large portion of the Florida coast. Storm surge is the water that gets bulldozed onto land by winds that blow from the ocean to land. Combined with the normal astronomical tides, water levels will be even higher ... Rather than narrowing in on a solution, the model guidance has taken a turn for the worst and actually introduced a lot more uncertainty beyond [7 October 2016]. Now, none of the GFS or European ensemble forecasts indicate a track over the northeast U.S., but rather an eastward turn once it’s up near North Carolina on [8 October 2016]. And not just a turn, but a decent number of ensemble members actually suggest the storm could make a loop, keeping the hurricane in this general area for the [ensuing] seven to 10 days.

As that analysis maintained, uncertainty about Matthew's course involved projections which included the "loop" scenario. That particular outcome was neither impossible nor a solid weather projection, but it also was not an implausible storm trajectory. Hurricane Ivan (2004), Hurricane Ginger (1971), Hurricane Ginny (1963), and Hurricane Edna (1953) all traversed a loop of some description, whlie Hurricane Easy (1950) executed a turn and hit Florida twice. The unique path of individual hurricanes makes it difficult to definitively determine how often the phenomenon occurs, but weather experts tweeted about past storms that followed such a path:

The most ridiculous GFS operational run in history. Saved in perpetuity. For public: ignore this. For mets: Fridge material. https://t.co/ImfciZEPpr

Here are a few more loopers. Anything is possible in meteorology. Still -- GFS unlikely to be right on track or details. pic.twitter.com/slgyax2xHQ — Matt Lanza (@mattlanza) October 5, 2016

Meteorologists on Twitter stressed that "possible" did not mean "likely" and joked about the map's viral popularity:

One final note on that GFS: Yes, a loop could definitely occur. But it's too soon to forecast & GFS probably too crazy with it. Watch/wait.

Ultimately, meteorologists typically concurred that Matthew looping to hit Florida twice was far from a sure thing:

Historically, only a handful of recorded hurricanes have exhibited such behavior, and meteorologists suggested that Matthew's potential loop might not be alarming as the viral map's projection suggested:

As of 5 October 2016, meteorologists focused largely on Matthew's position relative to Florida (not the possibility of a second hit):