Los Angeles After the Ice Caps Have Melted

A map of Los Angeles in an ice-free — but pun-friendly — world accurately reflects some estimates of what could theoretically happen to the city in the very distant future. 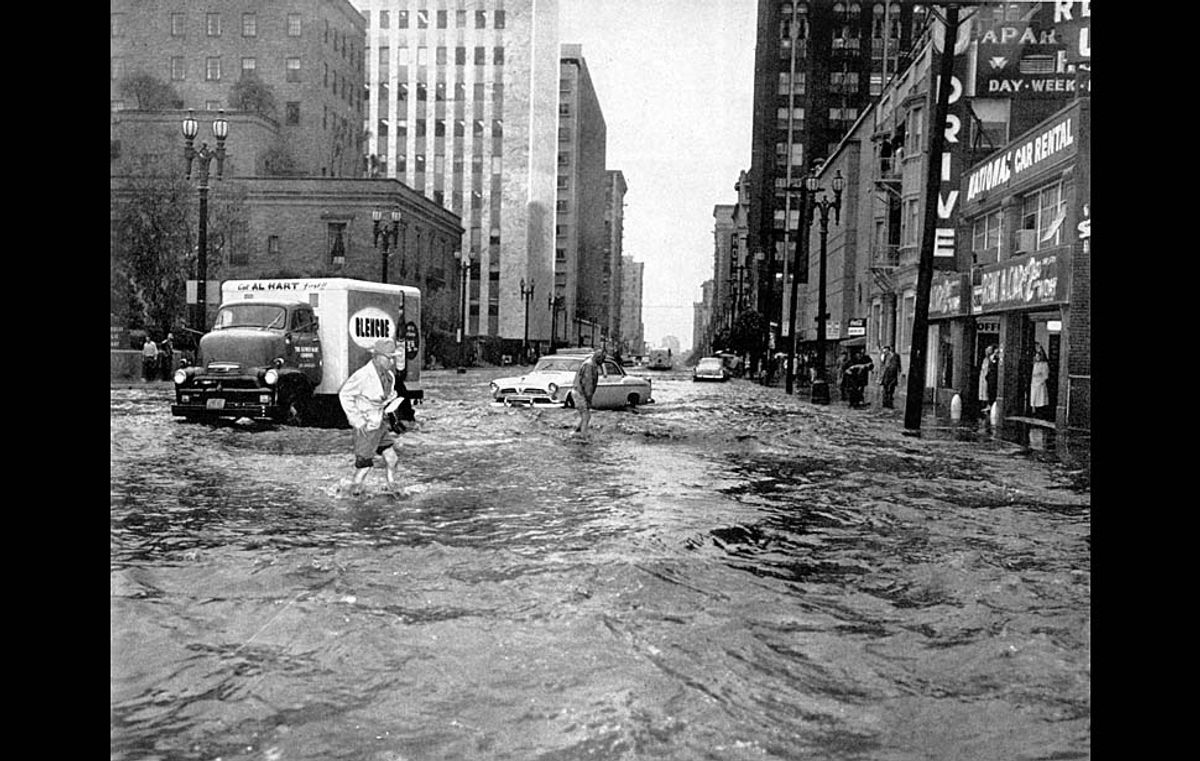 Feb. 19, 1958: Flooding on Flower between 5th and 6th Sts. during storm forces drivers to wade toward sidewalks. The morning storm dumped 2.32 inches of rain before noon.

In June 2014, on his web site Spatialities.com, urban planner Jeffrey Lin posted a humorously pun-laden map of what Los Angeles would look like if all the glaciers on Earth melted into the ocean.

Though controversial, Lin's scenario is one some scientists consider plausible if humans were to burn all available remaining fossil fuels: The map, titled “Bay of L.A.”, is one of many Lin has created of different coastal areas around the world. As an added bonus, he includes slightly modified geographic names to align with the submerged motif (watch out for that Strait Outta Compton): For elevation data, Lin used the publicly available USGS National Elevation Dataset (also known as NED), a compilation of data derived from a variety of surveys and satellite missions. The first version of Lin’s L.A. map estimated a sea level rise of 260 feet, based on numbers from the U.S. Geological Survey.

However, he later revised this number based on estimates from the Intergovernmental Panel on Climate Change, or IPCC, according to his “about the maps” section of the web site:

It was then pointed out to me that the IPCC had more up-to- date and presumably more accurate estimates of sea rise, with the highest sea level being 215′. I decided to go with the more recent estimates, and re-rendered the maps to reflect this data. Now all the maps assume a maximum sea level rise of 215′ or 66m.

Either number is reasonable, if not conservative, according to climate researchers. In September 2013, National Geographic published a feature about rising sea levels that included an interactive map of an Ice-free Earth that used 216 feet as their estimate for rising sea level.

The Atlantic later analyzed that number, arguing that it was likely too conservative. The largest cause of uncertainty, as they reported, is the extent to which the ocean water will expand when subjected to warmer temperatures:

More importantly, the raw figure of ice melt — including only the amount of water contained in the ice itself — vastly underestimates how much sea levels will rise. The problem is that as fluids and gasses get warmer, they increase in volume. Warmer water takes up more physical space than colder water, because the molecules have more energy. According to the United Nations' Intergovernmental Panel on Climate Change, which produces regular reports on the effects of global warming, the link between warmer water and increased volume is substantial.

No matter what numbers you trust, though, an Ice-free earth, even at the rate we are currently blowing through fossils fuels, would be centuries, if not millennia away. RadioLab’s Robert Krulwich investigated this very question in a 2014 blog post:

How long will it be before there isn't any ice left? [...] When Henry Pollack (a professor emeritus of geophysics at the University of Michigan) was asked, he answered, Losing all the ice in the world? I think sometime between a thousand and 10,000 years encompasses most probabilities.

Konrad Steffen [A University of Colorado Climatologist] figures (or figured, a couple of years ago) that Greenland might be iceless in 10,000 years, but Antarctica (being much bigger) will take a lot longer to turn bare.

The last time Earth was free of ice was toward the end of the Eocene, around 34 million years ago, long before anything even resembling a human being walked the Earth.