Terence Crutcher Shooting: What We Know

What we know so far about the controversial 16 September 2016 officer-involved fatal shooting of Terence Crutcher in Tulsa. 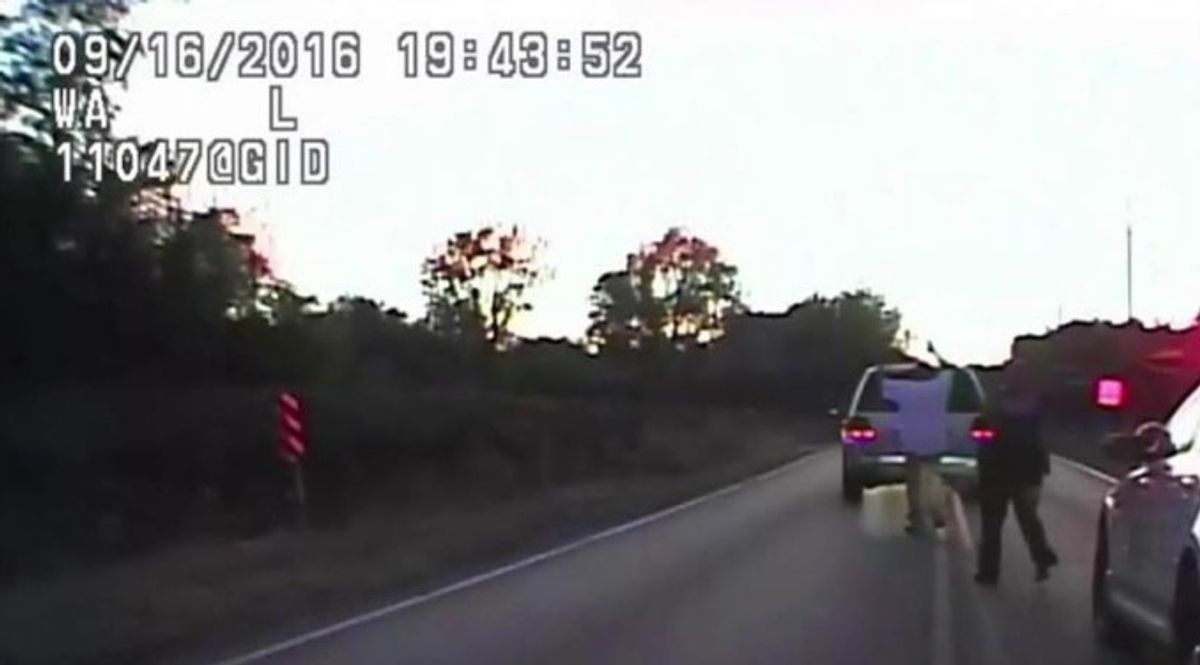 On 16 September 2016, unarmed 40-year-old Tulsa resident Terence Crutcher was killed in police shooting, an event all the more controversial as video of the event seemingly showed Crutcher with his hands in the air and complying with police orders just before he was shot. As is typically the case with such incidents, social media users advanced a number of claims about Crutcher's life and the events leading up to his death.

An initial report published by Tulsa World contained the basic facts of the incident: Crutcher's SUV stalled in the street, and after an encounter with police, he was shot and killed when he failed to comply with demands to put his hands up and instead attempted to reach into his vehicle:

A man was shot by a police officer Friday night after he reportedly reached into a stalled vehicle in the middle of a north Tulsa road instead of complying with officers' commands to raise his hands.

An officer had stopped about 7:40 p.m. to investigate why the sport utility vehicle was stalled in the middle of 36th Street North, just west of Lewis Avenue, while the officer was on his or her way to another call, police spokeswoman Jeanne MacKenzie said.
Before getting out of the car, the officer radioed for backup.

As that officer and the backing officer walked toward the SUV, a man — identified only as 40 years old and black — apparently approached the two officers from the side of the road, MacKenzie said.

The officers ordered the man multiple times to put his hands up, and the man reportedly didn't comply before reaching into the SUV. One officer deployed a Taser at the man, and shortly thereafter the other officer fired one shot, MacKenzie said.

Police release helicopter and dash cam footage of the shooting:

On 19 September 2016, police released two separate videos of the incident. Both are graphic in nature and depict the events up to and including the fatal shots fired:

Crutcher apparently complied with directives to put his hands up, the video reveals:

The released videos prompted debate over whether Crutcher had indeed complied with police directives, contrary to initial reports that he was shot after refusing to raise his hands. Critics maintained the debate was a "false media narrative" and asserted Crutcher did not in fact raise his hands as ordered. However, both the Tulsa World newspaper and Tulsa television station KJRH later reported that video footage contradicted initial reports:

7:43 p.m.: Helicopter footage begins, showing Terence Crutcher slowly walking with arms up toward his vehicle while being followed at a close distance by two uniformed officers. One of the men in the helicopter notes that it appears a Taser is about to be deployed, and the other comments that Crutcher “looks like a bad dude, maybe on something.” When Crutcher reaches the closed driver’s door of his vehicle, Taser sights can be seen on his back. The gunshot can be heard, at which point the two officers shuffle backward and two other officers cluster around. Crutcher’s right arm drops to his side. The angle of the video shifts, making it difficult to see the position of Crutcher’s limbs, but it appears Crutcher’s left arm also comes down, and about 12 seconds after the shot his body is seen falling to the ground next to the driver’s side door.

On 20 September 2016, the Associated Press reported that Crutcher was unarmed, was in compliance with police directives, and did not have any weapons in his vehicle. Moreover, the AP asserted that no aid was rendered to the wounded Crutcher for at least two minutes:

An unarmed black man killed by a white Oklahoma officer who was responding to a stalled vehicle can be seen in police video walking away from officers and toward his SUV with his hands up before he approaches the driver’s side door, where he drops to the ground after being shocked with a stun gun then fatally shot.

Police Chief Chuck Jordan announced before the video and audio recordings’ release that Crutcher had no weapon on him or in his SUV when he was shot Friday. It’s not clear from the footage what led Betty Shelby, the officer who fired the fatal shot, to draw her gun or what orders officers might have given Crutcher. Local and federal investigations are underway to determine whether criminal charges are warranted in the shooting or if Crutcher’s civil rights were violated.

Police video shows Crutcher walking toward his SUV that is stopped in the middle of the road. His hands are up and a female officer is following him. As Crutcher approaches the driver’s side of the SUV, three male officers walk up and Crutcher appears to lower his hands and place them on the vehicle. The officers surround him, making it harder to see his actions from the dashboard camera’s angle ... Initial police briefings indicated Crutcher was not obeying officers’ commands, but [police spokeswoman Jeanne] MacKenzie said Monday she didn’t know what Crutcher was doing that prompted police to shoot.

After the shooting, Crutcher could be seen lying on the side of the road, blood pooling around his body, for nearly two minutes before anyone checked on him. When asked why police did not provide immediate assistance once Crutcher was down, MacKenzie said, “I don’t know that we have protocol on how to render aid to people.”

Accounts are inconsistent as to whether Crutcher's window was up or down:

Another point of contention pertained to whether Crutcher was reaching into his vehicle in defiance of police orders just before the shooting. On 17 September 2016, police spokeswoman Jeanne MacKenzie Mackenzie issued a statement saying Crutcher was unccoperative with police and attempted to reach into his SUV:

As they approached the vehicle a black male started towards them. They asked him to show his hands. He refused to follow commands given by the officers. They continued to talk to him. He continued not to listen, not follow any commands as they got closer to the vehicle he reached inside the vehicle and at that time there was a Taser deployment and then a short time later there was one shot fired.

On 20 September 2016, Crutcher family attorney Benjamin Crump released enhanced still images from the shooting video and questioned how Crutcher could have been reaching into to what appeared to be a rolled-up window (marked with blood): An unidentified source inside the Tulsa Police Department (TPD) disputed the photographs, maintaining the SUV window in question was indeed down at the time Crutcher was tasered.

The backgrounds of Crutcher and Shelby become an issue:

Talk show host Sean Hannity proclaimed that Crutcher "numerous warrants out for his arrest, including one assault on an officer and drug trafficking. According to another Crutcher family attorney, what Hannity was referencing was previous convictions, and Crutcher had
no open warrants at the time of his shooting:

Court records show officers used force against Crutcher on at least four separate occasions, including a 2012 arrest on public intoxication and obstruction complaints. In that case, an officer used a stun gun on Crutcher twice while he was face down on the ground because the officer said Crutcher didn't comply with at least three orders to show his hands, a police affidavit states. Crutcher's father showed up while he was being arrested and told the officers that his son had "an ongoing problem" with the drug PCP, the affidavit states.

"Nobody claimed that he was a perfect individual. Who is perfect? But that night he was not a criminal," said Crutcher family attorney Melvin Hall regarding Crutcher's criminal record. "He did not have any warrants. He had not done anything wrong. He had a malfunctioning vehicle, and he should have been treated accordingly."

Also on 21 September 2016, Tulsa World quoted a TPD homicide detective who said a vial of the drug PCP was found inside Crutcher's vehicle.

Crump described the claim about PCP as a "red herring," and Crutcher family attorney Damario Solomon-Simmons responded to the assertion by stating that "It’s undisputed that the officers on the scene ... had no idea what may be in Terence’s car. They had no idea about the previous 911 calls. At that particular moment he was shot, he was not a suspect for any crime. Period."

TPB Officer Betty ShelbyShelby's purported history of domestic issues and drug use also came under scrutiny in the wake of the shooting:

Shelby has divorced and been re-married at least once. According to the job application she submitted to the sheriff’s office in 2007, the new wife of Shelby’s ex-husband noted that she filed a protective order against her in 2002 to help put an end to harassing phone calls she claims Shelby made to her. The order was eventually denied and Shelby maintained her innocence.

Nearly a decade earlier, Shelby also noted on the same application that she experienced a breakup in 1993 with her then-boyfriend. She said the split led to the two damaging each others cars and that temporary restraining orders were filed, which were eventually tossed out.

Police said they later found the narcotic drug PCP in Crutcher’s car but he is not the only one in the case who reportedly has a history of drug use. According to the same job application where Shelby noted her domestic disturbances, she also marked “yes” under a prompt that asked whether she had “possessed and used illegal drugs” in the past. Shelby said she used marijuana twice when she was 18 years old.

Tulsa's Police Chief vows there will be "justice" in the case and pledges to be transparent; other officers express disgust:

When the videos of the shooting were released, Tulsa Police Chief Chuck Jordan pledged that "We will do the right thing: We will not cover anything up." But Middletown, Ohio, Police Chief Rodney Muterspaw made headlines when he voiced his frustration at the officer-involved shooting via Twitter (his account has since been made private):

As an officer I am so sick and drained of some cops doing things like this. You are making us all look bad. STOP. #TerenceCruthcher

In response to subsequent tweets, he replied:

Been on that type of call/situation over 100x. You don't shoot for non-compliance. You shoot when UOF escalates. Not hard ... been in that situation 100x….communication, taser, pepper spray…whatever it takes to protect life first[.]

A Facebook post shared by a Tulsa educator about the effect of the shooting on local children has gone viral:

An unidentified Facebook user by the name of Rebecca Lee shared a post describing interactions with children and classmates of Crutcher's daughter in the shooting's aftermath:

Officer Shelby is charged with manslaughter: