Connecticut state troopers accidentally left a protester's camera on and recording as they discussed ticketing him. 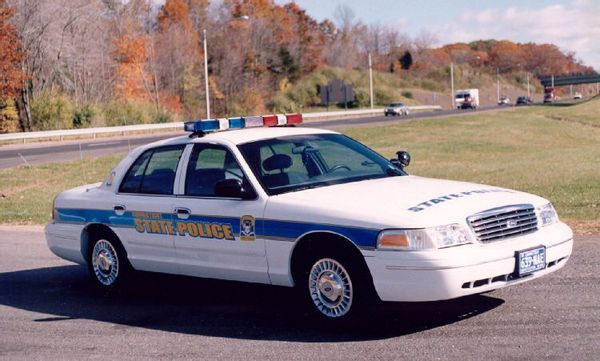 Connecticut state troopers arrested Michael Picard in September 2015 as he was protesting a DUI checkpoint.  Picard has a strong interest in constitutional law and right to privacy laws, and so felt that it was his duty to find where the checkpoints were located (at least within in the Hartford region) and record the officers.  According to the complaint filed in U.S. District Court by the ACLU, Picard was already well-known to authorities there:

At all times during his protest, Mr. Picard held a three-foot by two-foot yellow sign reading “Cops Ahead: Keep Calm and Remain Silent.” He displayed the sign to motorists on Park Road who were approaching the gore from both directions.

Three officers approached Picard and confiscated his camera, saying that it was illegal to record them. Connecticut ACLU Legal Director Dan Barrett (who is representing Picard) called their actions "really brazen":

He was standing there for an hour, hour and a half without any problems. Then, the state police officers who were working the checkpoint come over to Michael, and the first thing they do is slap the camera out of his hand so it hits the ground. He thinks it’s broken.

It was really brazen. There’s another video showing that the first thing the state trooper does is walk up and with his open hand slap the camera down to the ground. He doesn’t even say anything like “put that down,” or “please lower your camera.” He just slaps it to the ground. Then he interacts with Michael as if nothing happened, as if, “I’m just allowed to do that, and I don’t even have to tell you why I just broke your camera.” It’s an amazing level of hostility.

Picard then reportedly picked up the camera and continued trying to record, and officers then took it away, not realizing that the camera was rolling:

The above video catches the discussion, and then at about 1:02 one of the officers says:

You want me to punch a number on this either way? Gotta cover our ass.

The officers then discuss what charges the protester should receive:

I think we do simple trespass, we do reckless use of the highway and creating a public disturbance.

So far, the video isn't particularly eyebrow-raising, but a few moments later, the following exchange takes place about 1:48 into the video:

-We'll throw all charges, three on the ticket.

-And then we claim that, um, in backup, we had multiple people, um, they didn't want to stay and give us a statement, so we took our own course of action.

The criminal charges brought against Picard were dismissed in July 2016. He is seeking reimbursement for his court costs and an unspecified amount in damages, saying his First and Fourth Amendment rights — the rights to free speech and unreasonable search and seizure, respectively — were violated.