ITT Technical Institute Closes Their Doors After 50 Years in Business

The private technical training colleges announced they are closing after the U.S. Department of Education cracked down on for-profit institutions. 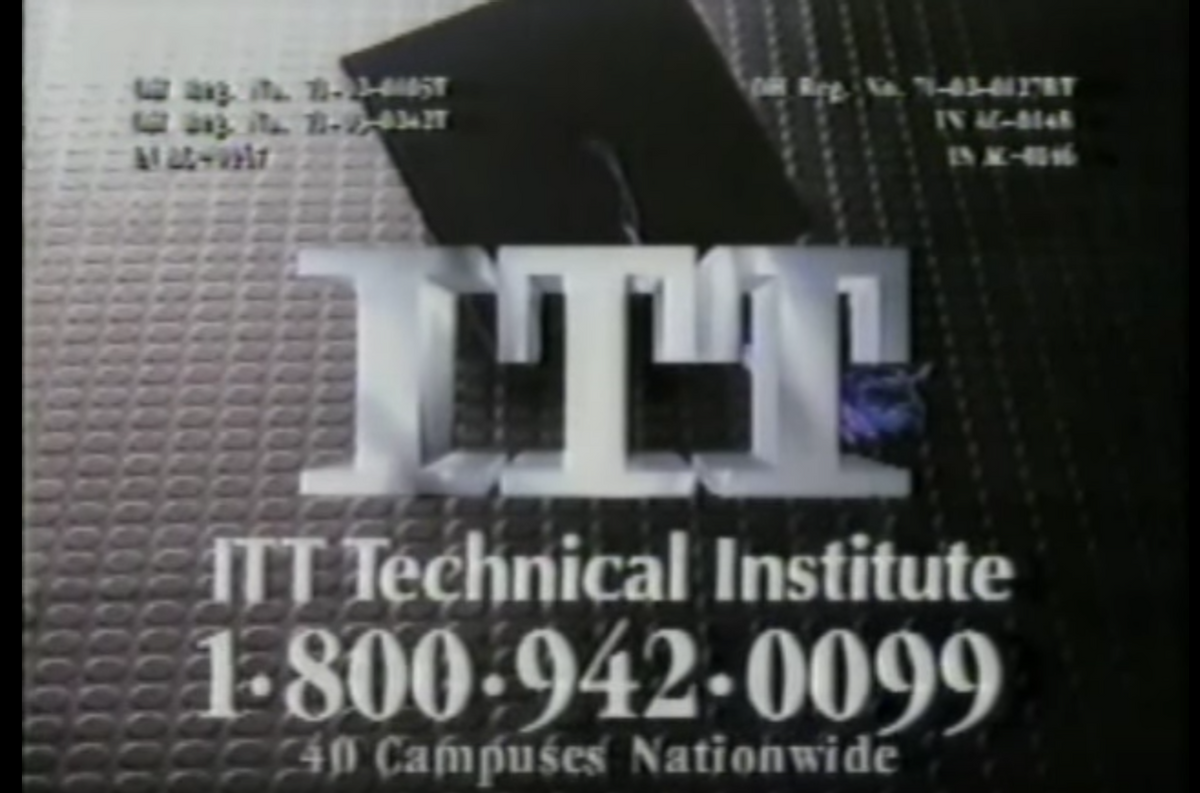 Anyone who watches television in the United States has likely seen an advertisement for ITT Technical Institute. But after 50 years, the Indiana-based for-profit college will be shutting down all of its roughly 130 campuses, citing actions by the U.S. Department of Education.

In a statement dated 6 September 2016, ITT announced it will not be opening campuses for the upcoming Fall quarter:

The actions of and sanctions from the U.S. Department of Education have forced us to cease operations of the ITT Technical Institutes, and we will not be offering our September quarter. We reached this decision only after having exhausted the exploration of alternatives, including transfer of the schools to a non-profit or public institution.

Effective today, the company has eliminated the positions of the overwhelming majority of our more than 8,000 employees. Our focus and priority with our remaining staff is on helping the tens of thousands of unexpectedly displaced students with their records and future educational options.

This action of our federal regulator to increase our surety requirement to 40 percent of our Title IV federal funding and place our schools under "Heightened Cash Monitoring Level 2," forced us to conclude that we can no longer continue to operate our ITT Tech campuses and provide our students with the quality education they expect and deserve.

The Department of Education released a statement on its blog informing students that ITT has come under increased scrutiny recently and found to be out of compliance with its accreditors:

In recent years, ITT has increasingly been the subject of numerous state and federal investigations. In August, ITT’s accreditor, the Accrediting Council for Independent Colleges and Schools (ACICS) determined that ITT “is not in compliance, and is unlikely to become in compliance with [ACICS] Accreditation Criteria.” This came amid increasingly heightened financial oversight measures put in place by the Department over the past two years due to significant concerns about ITT’s administrative capacity, organizational integrity, financial viability, and ability to serve students.

The school’s decisions have put its students and millions of dollars in taxpayer-funded federal student aid at risk. Last week, the Department of Education took oversight actions to prevent ITT from continuing to add to that risk. When we made that decision, we did not take it lightly. One possible outcome of oversight actions is that a school may choose to close rather than take corrective actions, which can cause disruption and disappointment for current students. Ultimately, we made a difficult choice to pursue additional oversight in order to protect you, other students, and taxpayers from potentially worse educational and financial damage in the future if ITT was allowed to continue operating without increased oversight and assurances to better serve students.

Students have the option of starting over with a clean slate and having their federal student loans discharged, or transferring their credits and continuing on at a different school to graduation.

Problems for the education chain have been ramping up in the past few years. In 2014, the Consumer Financial Protection Bureau sued ITT, accusing the company of pushing students into exploitative private loans to finance their education.

In 2015, the Securities and Exchange Commission charged ITT Educational Services Inc., its chief executive officer Kevin Modany, and its chief financial officer Daniel Fitzpatrick with fraud, alleging the company misled investors about the risks of its private student loan programs. The SEC's enforcement division head said in a statement at that time:

Our complaint alleges that ITT’s senior-most executives made numerous material misstatements and omissions in its disclosures to cover up the subpar performance of student loans programs that ITT created and guaranteed. Modany and Fitzpatrick should have been responsible stewards for investors but instead, according to our complaint, they engineered a campaign of deception and half-truths that left ITT’s auditors and investors in the dark concerning the company’s mushrooming obligations.

ITT has just over 40,000 students and roughly 8,000 employees. Most of those employees are now jobless, according to the company statement.