The small group said it was at the NAACP building to protest Black Lives Matter and other related movements. 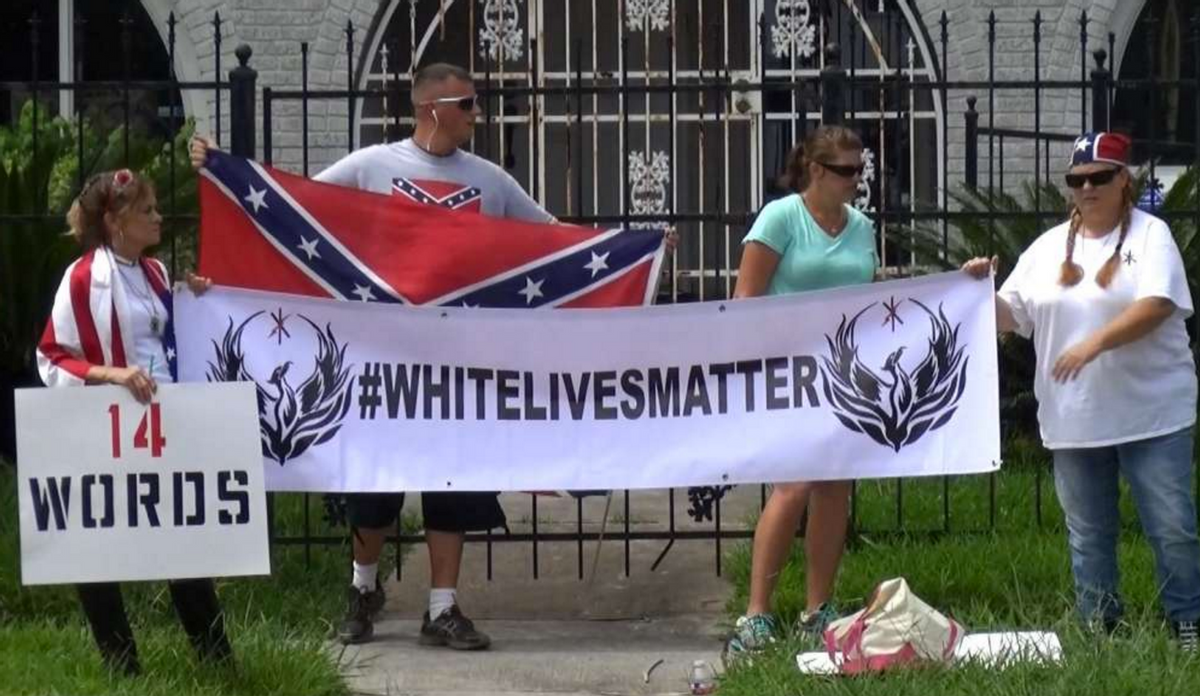 A small but heavily armed group of people surrounded the Houston NAACP building on 21 August 2016.

The group of about twenty people, which called itself "White Lives Matter," waved Confederate flags and held up a sign reading "14 Words," which is a reference to a popular white power slogan: "We must secure the existence of our people and a future for white children."  (The phrase was coined by David Lane, member of The Order, a white supremacist group.)

Spokesman Ken Reed said that they were in front of the NAACP building to protest the Black Lives Matter movement:

"We came out here to protest against the NAACP and their failure in speaking out against the atrocities that organizations like Black Lives Matter and other pro-black organizations have caused the attack and killing of white police officers, the burning down of cities and things of that nature," White Lives Matter member Ken Reed said. "If they're going to be a civil rights organization and defend their people, they also need to hold their people accountable."

Reed told local news outlets that the group did not intend to instigate anything, and that they were armed for their own protection:

"We're being told that it's bad to be white. Every other race is encouraged to promote their heritage and culture, but as soon as a white person does it they are labeled as evil or racist," said Reed, who clarified they are not an anti-Black Lives Matter movement. "We expect every race to be proud of who they are. We're out there fighting for our rights just like everyone should."

The NAACP responded with a statement a day later:

While some may be shocked by what they witnessed yesterday in Houston, it is important to remember that the NAACP is subject to this type of harassment on a regular basis. The presidents of our more than 2,200 local chapters and branches often field angry and harassing phone calls, as well as vandalism, bomb threats and other calls for violence simply for standing up for the civil rights of all people. This hateful rhetoric has only increased during the current presidential election.

Racism is a longstanding and divisive issue in this country, and many people at first feel victimized when confronted with the facts of how it continues to affect the lives of millions. But a misguided sense of victimhood does not justify brandishing weapons on a Sunday afternoon in a residential neighborhood, or make the statements of this group true or correct.

We are encouraged that, in the face of flagrant hate and ignorance, the protestors in Houston were met by a larger crowd opposing their ignorance and dedicated to peace and prayer. Justice comes when communities refuse to let evil people perpetuate their misguided anger on innocent people.

It is not immediately clear why the protesters chose the NAACP headquarters in Houston to stage their protest against Black Lives Matter and related movements.