The teammates had said that they were robbed at gunpoint at a gas station, but Brazilian police say video sheds major doubt on their accounts. 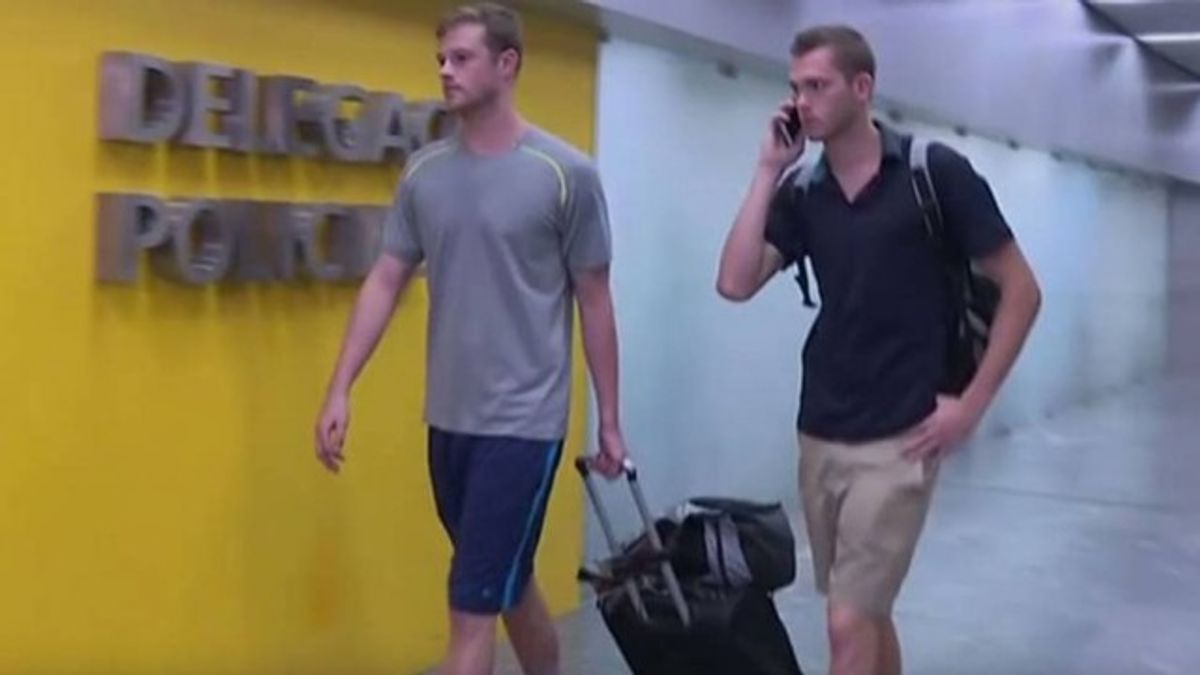 A wild story about a frightening holdup at gunpoint in Rio de Janeiro has turned into an international incident and culminated in an apology from U.S. Olympic swimmer Ryan Lochte after the story fell apart:

On 18 August 2016, two other United States Olympic swimmers were pulled from a flight home for questioning by police in Rio de Janeiro when their stories about an armed robbery showed inconsistencies:

According to the Civil Police, swimmers said they were assaulted by men disguised as police. Civil Police Chief Fernando Veloso said that the athletes should apologize to Rio. "The only truth they told is that they were drunk," Veloso said.

Veloso told reporters that the swimmers should apologize:

In theory, one or all of them might be charged for false communication of a crime and for damaging private assets, the gas station. I'm not saying that they are charged right now because of that. We have to finalize the investigation and in theory that could be the case. This is not really a — this kind of crime will not lead to their arrest.

Ryan Lochte, Gunnar Bentz, Jack Conger and Jimmy Feigen had said that they were held up and robbed at gunpoint early on the morning of 14 August 2016:

He said they told the other swimmers to get down on the ground but he refused.

A spokesman from the International Olympic Committee said the story was absolutely untrue — then recanted:

Then Mr Adams retracts his statement, saying he received incorrect information from the United States Olympic Committee (USOC). The USOC puts out a statement confirming that the swimmers were robbed.

The swimmers do not report the incident to police or to the USOC, and officers in Rio only get involved after seeing it reported on TV.

Then the stories from the swimmers began to change:

Initially, Lochte said he, Jimmy Feigen, Jack Conger and Gunnar Bentz were returning to the Olympic village in a cab when they were pulled over and robbed by men dressed as cops, but Lochte later told NBC's Matt Lauer that story wasn't exactly true. Instead, he said all four swimmers were at a gas station when they were robbed.

"They had gone to the bathroom in a gas station," Lauer said during NBC's Olympic coverage on Wednesday night, describing what Lochte told him. "They got back to the taxi, and when they told the taxi driver to go, he didn't move. They said, 'let's go' again, 'we've got to get out of here,' and again the taxi driver didn't move. And that's when he says two men approached the car with guns and badges."

Brazilian authorities now say that — along with the inconsistencies — footage doesn't show any evidence of any of them getting robbed. However, they say security video does show the swimmers in a fight at a gas station:

Brazilian authorities told ABC News on Thursday that video shows a U.S. swimmer breaking down a gas station restroom door while "fighting" with a security guard, and that they believe Ryan Lochte and three other American swimmers fabricated a story about being robbed.

Lochte has already returned to the United States; Feigen, Bentz, and Conger remained in Brazil as of 17 August 2016:

Feigen, a former Churchill High School and University of Texas standout, declined comment when contacted by the San Antonio Express-News on Wednesday morning.

"I can't talk right now," Feigen said. "I'm being s----stormed right now. I'm still in Brazil and (an interview) is going to have to wait."