In a rambling radio interview, physician and media personality Dr. Drew Pinsky said he's 'gravely concerned' about Hillary Clinton's health, and also that 'It’s not so much that her health is a grave concern.' 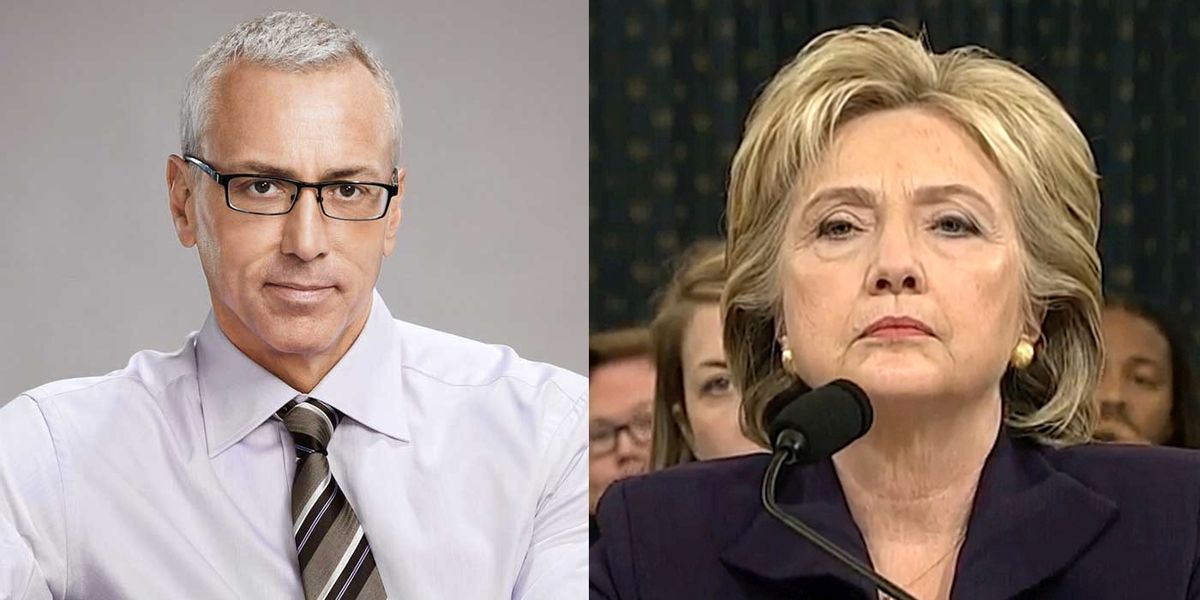 Physician and media personality Dr. Drew Pinsky weighed in on the state of Democratic presidential candidate Hillary Clinton's health during a radio interview, stating that he and a colleague (physician and media personality Dr. Robert Huizenga) had "evaluated the medical record that she had released" and "were gravely concerned not just about her health, but her health care."

Speaking  on the McIntyre in the Morning show on KABC-TV in Los Angeles, Pinsky said, "Both of us concluded that if we were providing the care that she was receiving, we’d be ashamed to show up in a doctor’s lounge."

Pinsky has never examined Clinton himself, however. The "medical record" he says he evaluated is a two-page health care statement signed by the candidate's personal physician, Dr. Lisa Bardack, on 28 July 2015. The document summarized Clinton's current medical conditions ("hypothyroidism and seasonal pollen allergies"), medical history ("notable for a deep vein thrombosis in 1998 and in 2009, an elbow fracture in 2009, and a concussion in 2012"), and pronounced her "in excellent physical condition and fit to serve as President of the United States."

Originally released along with the candidate's tax returns in 2015, Bardack's letter was thrust into the spotlight again after forged medical records purportedly signed by her were circulated on the Internet in August 2016. Dr. Bardack released a statement in response to those documents:

The re-release of Bardack's original 2015 letter was aimed at squelching unfounded rumors and speculation about Clinton's health, but Pinsky's comments re-ignited the controversy. Specifically, he raised an alarm about the blood clot found in her skull (transverse sinus thrombosis) after she suffered a concussion during a fall in late 2012. It's a rare condition that Pinsky described as a "complication" of Clinton hitting her head, although, according to a Washington Post report on the original diagnosis, whether or not the blood clot was related to the injury was "unknown, with experts offering divergent opinions." Pinsky also noted that Clinton wore "prism glasses" (Fresnel prism lenses) to treat the double vision that resulted from her concussion. "That is brain damage, and it’s affecting her balance," Pinsky said. However, while a concussion can be serious, experts say it's the mildest form of brain injury, and Clinton only wore the special glasses for two months.

Pinsky also questioned the medications Clinton is using, describing the treatments as "sort of 1950-level care." One of them, the anti-coagulant Coumadin (warfarin), is still very commonly prescribed by doctors. According to Clinton's physician, she's taking it "as a precaution." The other, Armour Thyroid, is a "natural" hormone replacement medication that was once the most common form of thyroid therapy but is now rarely prescribed, according to the American Thyroid Association, because synthetic hormones are considered more consistent and reliable. "Maybe they have reasons," Pinsky said of what he called Clinton's "old-fashioned" health care, "but at a distance, it looks bizarre."

Again, however, all this second-guessing was based on Pinsky's reading of a brief, two-page summary of the state of Hillary Clinton's health. In the end, after saying twice that he was "gravely concerned" by what he read in the document, he seemed to contradict himself: "It’s not so much that her health is a grave concern," Pinsky admitted (using the phrase a third time). "It’s that the care she’s getting could make it a concern."

Well, first of all, just to get down to a human level for a second, all of us ought to include Hillary Clinton in our prayers. You can be opposed to somebody without hoping that they have bad health, and I hope that she's all right. Second, I'm always dubious, with all due respect to television doctors, when you have a doctor who has never seen the patient, begin to give you a complicated, fancy sounding analysis based on what? I mean, I would be very cautious and I would recommend to doctors for professional reasons to be very cautious deciding you're gonna start analyzing people.

Several days after Pinsky offered these comments, HLN announced that they would be
dropping his nightly prime-time show, Dr. Drew, as of 22 September 2016.