Ivanka Trump met up with Wendi Deng Murdoch, but the two are old friends and the latter denies she's ever met Vladimir Putin, much less is dating the Russian president. 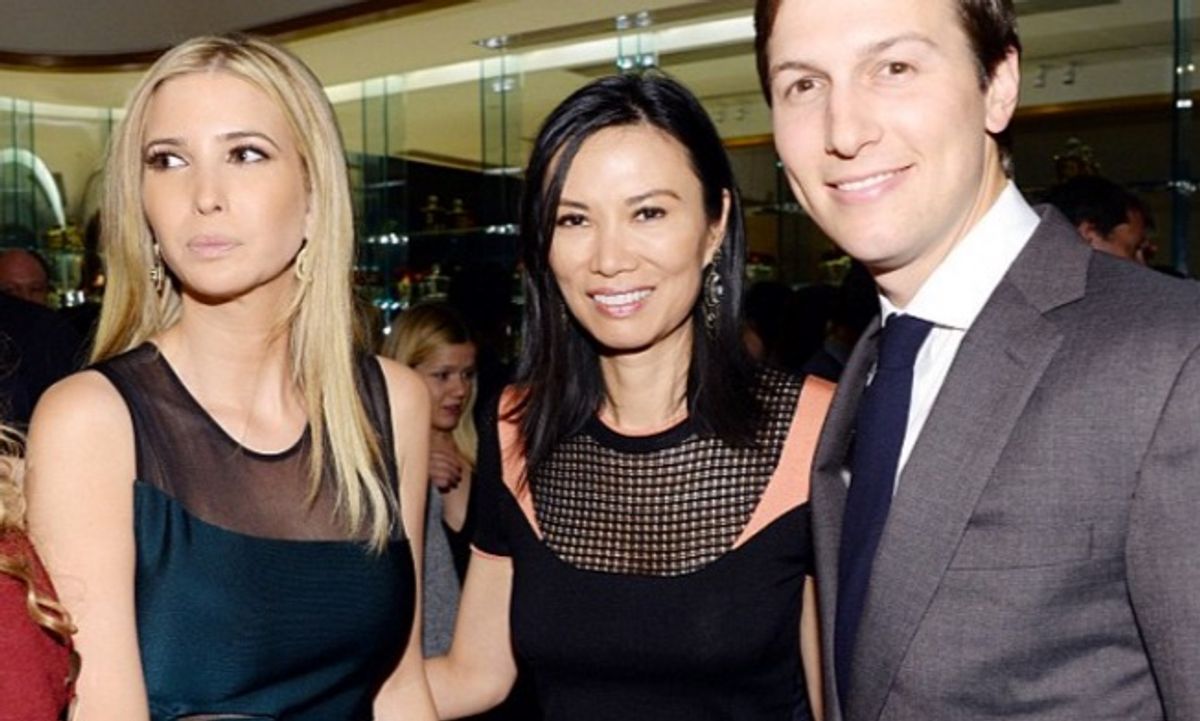 Against the backdrop of persistent rumors of a connection between Donald Trump and Russian operatives (including Russian president Vladimir Putin), in August 2016 a rumor began circulating that Trump's daughter Ivanka was vacationing with none other than Putin's girlfriend, Wendi Deng Murdoch:

In a vacuum, the claim sounded quite scandalous. The often inaccurate site Occupy Democrats published a piece titled "Trump’s Daughter and Putin’s Girlfriend Just Went on Vacation Together," intimating the women's camaraderie was something that had just been uncovered.

Surprise, surprise! Republican presidential nominee Donald Trump’s daughter Ivanka and the ex-wife of Fox News owner Rupert Murdoch and current girlfriend of Russian dictator Vladimir Putin, Wendi Deng Murdoch, are best buddies who just went on a lavish vacation together. Might that explain Fox News’s unbelievably slanted favorability towards Trump’s despicable brand of politics? Could you imagine the outrage by Republicans if one of President Obama’s daughters were hanging around with Putin’s girlfriend?

Elided from the breathless rumors was any sort of background. Deng and Ivanka Trump are longtime pals, as evidenced by a 2014 Daily Mail article (which antedated Trump's announcement of his candidacy by more than a year) that pictured them together and described the pair as "close friends":

[T]he pair are indeed close friends and spent most of the evening chatting to each other.

Ivanka had close ties with Wendi when she was married to publisher Rupert, even joining them for a trip to Jordan to meet with Queen Rania in 2011.

The claim to a long-established friendship was bolstered by a June 2012 New York Times article about Deng that mentioned her "close" friendship with Ivanka Trump:

Mrs. Murdoch initially found out about Art.sy the way wealthy and well-connected people hear about potential investments: through a friend. The friend was Joshua Kushner, who runs the private equity firm Thrive Capital and whose sister-in-law, Ivanka Trump, is a close friend of Mrs. Murdoch’s.

The Murdochs briefly occupied a nearby condo in the Trump Park Avenue building, where Jared Kushner and Ivanka Trump live. Grace and Chloe speak Mandarin to Ms. Trump’s young daughter, Arabella, and the Murdoch women regularly attend Ms. Trump’s Sabbath dinners. (“She loves the challah,” Ms. Trump said of Mrs. Murdoch. “She calls it ‘that bread.’ ”)

In 2013, The Hollywood Reporter published an article about Deng and Murdoch's daughters and also mentioned that Deng and Trump had toured Jordan together in 2011:

Tony Blair, who is godfather to Grace, attended the two girls' baptism beside the River Jordan in 2011. Also in attendance were Nicole Kidman and Hugh Jackman, who became their godparents in 2010. After the baptism, Queen Rania of Jordan invited the Murdochs, Kidman, Jackman, Kidman's husband, Keith Urban, and Ivanka Trump for a three-day tour of the country, including a visit to Petra, Wadi Rum and the Dead Sea.

If Deng is (or was) romantically involved with Putin, that relationship began well after she began palling around with Ivanka Trump, as a gossip magazine reported in March 2016 that Putin and Deng were a "new couple":

How’s this for a new couple alert? The rumor circulating around the corridors of power — from Washington, D.C., to Europe and Asia — is that Vladimir Putin and Wendi Deng, Rupert Murdoch’s ex-wife, are dating.

Reports of the pair have been floating around for years, ever since their respective divorces in 2014 and 2013.

One insider close to the powerful leader tells Us Weekly the relationship is “serious.”

Vanity Fair followed up with some background information on Deng's propensity for dating (and marrying) moguls:

It is difficult to imagine finding a fourth mate who could out-titan a media mogul, a king of technology, and a world leader, who, combined, are worth about $23 billion. But if there’s someone you want to bet on reaching that summit, it is Deng, who is now allegedly dating Russian president Vladimir Putin, according to the gossip magazine Us Weekly. Maybe Deng, then, is the lightning.

Now, it is unclear just how accurate the report is. Even the tabloid admits that news of the pairing stems from the rumor mill, though word on the couple has apparently been traveling among a certain set for some time. The two have yet to be spotted together in public, because that level of self-serving malevolence in one single frame would likely crumble the earth onto itself. But Us did report Deng was spotted earlier this week boarding the St. Barths–docked yacht of Russian businessman Roman Abramovich. After Putin’s election, the billionaire reportedly gifted him a $35 million yacht to add to his collection of playthings, according to the Daily Mail. This one degree of mega-yacht separation isn’t quite a confirmation, but it has to count for something, right?

That same magazine weighed in on Deng and Trump's rumor-mill tested friendship after Ivanka's father announced his campaign in 2015:

For Ivanka, it may seem like a no-brainer to support her father during his presidential campaign. All of Trump’s children, and their respective spouses, stood on stage with him during his campaign announcement on June 16. But Ivanka’s penchant for loyalty seems to run deeper. When pal Wendi Deng Murdoch split from her media-honcho husband in 2013, Ivanka tactfully waded through the tabloid storm that was the couple’s divorce. To this day she remains friends with both Wendi and Rupert (despite her father’s back-and-forth issues with Murdoch), a source close to Ivanka maintains. And Charles Kushner, the father of her husband, Jared, whom she married in 2009, was convicted in federal court in 2005 for making illegal campaign contributions, tax evasion, and witness tampering. Her track record proves she can tolerate a significant amount of adversity.

People's 14 August 2016 coverage of the pair's European holiday made no mention of Deng's purported ties to Putin and simply framed the vacation as old friends meeting up (while famous):

Ivanka Trump is taking a break from the campaign trail to vacation with friends.

Trump, 34, was spotted with husband Jared Kushner in the city's old town, seemingly taking a couple's vacation without their three children – Arabella, 5, Joseph, 2, and Theodore, 4 months.

Deng Murdoch was actually responsible for setting up Trump and Kushner.

Ivanka Trump's friendship with Wendi Deng dates back to at least 2011, as numerous media reports attest. Although Deng was rumored in March 2016 to be dating Putin,those rumors were not confirmed, and in July 2016 Deng denied ever having met him.

Several politicized accounts of Trump and Deng vacationing together elided mention of their long friendship and highlighted Deng's new, rumored links to Putin, creating the impression that Ivanka Trump was schmoozing with a random woman linked to the Russian leader. In fact, that woman is famous in her own right and is a longtime acquaintance of Ivanka Trump.