Where does Donald Trump get his news? Probably not from snopes.com, as some poorly written reporting implied. 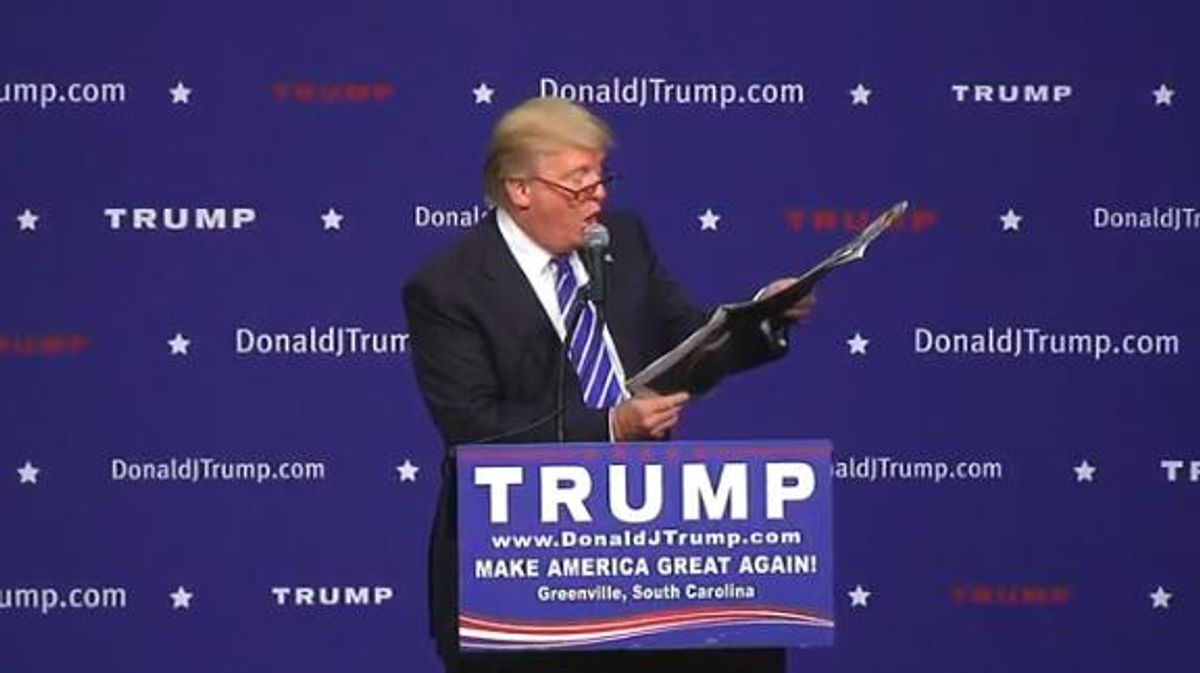 A recurring theme in the humor and political commentary of comedian Bill Maher (and a concept that has been expressed elsewhere in more sober, less partisan fashion) is that many Americans live in a metaphorical information "bubble," utilizing only information providers that reflect their own political viewpoints, never seeking out or being exposed to other news outlets or points of view:

Comedian Bill Maher said that Republicans needed to escape the “Republican bubble” if they wanted to win a future presidential election.

“Republicans have to start getting their information from a better source than Fox News,” he told MSNBC host Chris Matthews. “I’m not kidding about this. I think this really screws them up.”

Maher joked that Republicans even had their own polls, alluding to Rasmussen Reports. Despite most polls showing President Barack Obama would defeat Mitt Romney, many conservative pundits still insisted that the Republican candidate would be victorious.

“They were shocked by this election,” Maher continued. “They have to somehow fix the way they get information, because they only talk to each other and they don’t know what is going on in the real world — and they were rudely awakened.”

On 12 August 2016, Callum Borchers wrote a piece for the Washington Post ("The highly reliable, definitely-not-crazy places where Donald Trump gets his news") applying this concept to Republican presidential nominee Donald Trump, a candidate who has famously (and often) expressed disdain for much of the American news media. If Trump distrusts and spurns nearly all mainstream U.S. press reporting, Borchers mused, then where does he find information he considers reliable? The answer, according to Borchers, is from a variety of web sites, including — shockingly — us:

Donald Trump hates the "failing" New York Times, "dishonest" Politico and "ratings-challenged" CNN. He complains constantly about the media, in general, and even has a 30-question survey on his website that invites supporters to express how strongly they, too, dislike the press.

But where does Trump himself find information he trusts? The list includes the National Enquirer, Snopes and some guy on Twitter who goes by @SeanSean252.

Yes, Mr. Borchers then actually lumped us in with a collection of right-wing and political conspiracy sites such as Breitbart, Gateway Pundit, World Net Daily, and Infowars as a "news source Trump relies on."

While we're flattered by the thought that a presidential candidate might utilize and value our services, we're pretty sure anyone possessed of a nodding familiarity with our site would find the idea that Donald Trump is turning to snopes.com for his daily dose of news and talking points highly risible. We're primarily a fact-checking site, and given that the Trump campaign has been rather factually challenged to date, Mr. Trump is not likely to be citing us on out on the campaign trail. (Indeed, our writers' attempts to obtain information from Trump campaign media reps — even in the service of correcting potential falsehoods about the candidate — are typically met by silence.)

So where did Mr. Borchers glean the idea that Donald Trump regularly relies upon us as a new source? As he explained, in one poorly written and misleading paragraph:

Trump doesn't spend much time questioning President Obama's place of birth these days. He's busy calling Obama the "founder of ISIS." But during the last presidential election, the business mogul was obsessed by "birther" conspiracy theories.

Where did he get the false notion that Obama was born outside the United States? Politico in 2011 traced the origin of "birtherism" to an anonymous email chain posted on Snopes, a site that — by its own admission — traffics in urban legends.

It's true that while testing the waters for a 2012 presidential bid, Donald Trump tapped into "birtherism" — a movement holding that President Obama was born outside the United States and is therefore not eligible to hold office — in a big way, publicly proclaiming that he was dispatching a team of private investigators to Hawaii to potentially uncover "one of the greatest cons in the history of politics and beyond" (nothing came of the announcement, and it's doubtful investigators even went to Hawaii) and famously offering President Obama $5 million (or, in some tellings, $50 million) to provide his birth certificate, passport and college records (Obama released his long-form birth certificate but didn't claim the reward).

But Mr. Borchers, who — by his own admission — writes for the Washington Post, made it sound as if we somehow started the whole "birtherism" movement, and Donald Trump learned of it from us. The former is a ridiculous proposition, and the latter is rather unlikely.

As the oldest fact-checking site on the Internet, we were the first to recognize and write about birther conspiracy theories — but we've spent years and years debunking such rumors, not creating or promulgating them. And by the time Donald Trump seized on birtherism as a political issue in 2011, that subject was so widespread throughout all forms of media (including the mainstream press) that Donald Trump would have been exposed to it through a multiplicity of sources.

Even worse, Mr. Borchers extrapolated from this single tenuous example (i.e., that Donald Trump has espoused birtherism, and we've long debunked birtherist rumors) the bizarre notion that Donald Trump and his supporters now rely upon us a news source on an ongoing basis — even though snopes.com appeared nowhere on the list of sites he reproduced as representing "where the Republican presidential nominee thinks his fans get their news": We'll charitably assume Mr. Borchers just isn't that familiar with snopes.com and unfortunately didn't take much time to learn about what we do. Either that or he meant his reporting to be taken in a sarcastic sense.