Pundits grasping at the slimmest of threads have posited 'deep legal and financial connections' between Khizr Khan and Hillary Clinton. 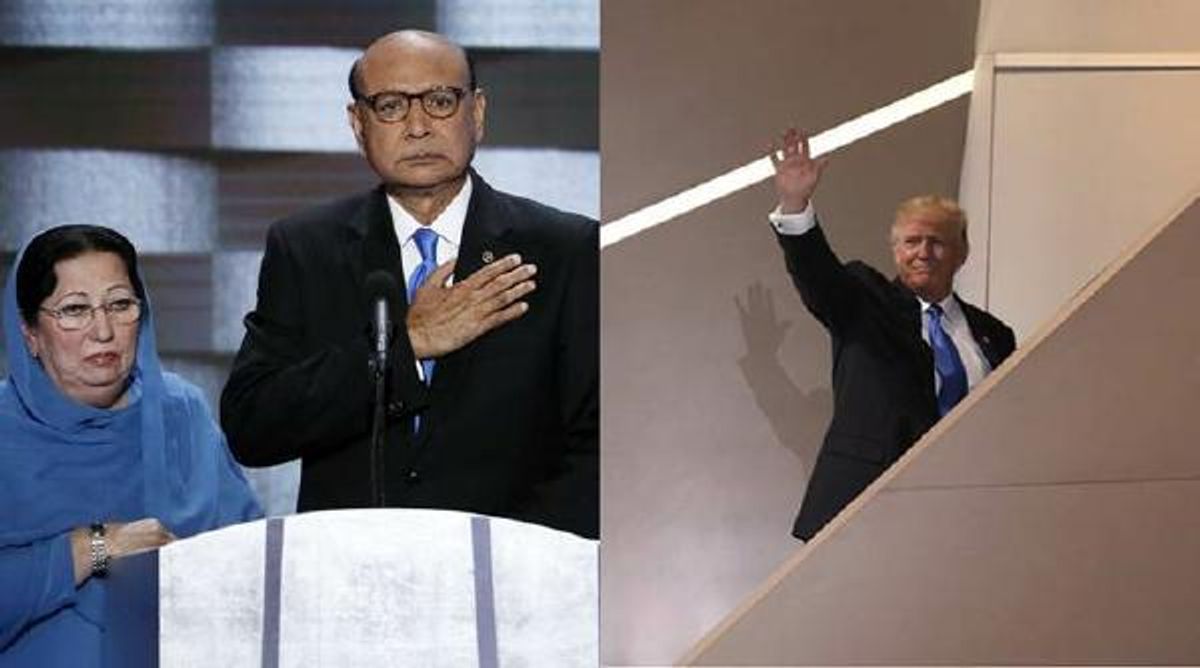 An unexpected controversy took root after the July 2016 Democratic National Convention (DNC) involving key speaker Khizr Khan, who took to the convention stage to speak about Donald Trump, Muslims in America, and the loss of his son, U.S. Army Captain Humayun Khan. In the succeeding days, Trump himself repeatedly attacked the Khans in public statements, provoking disgust among both ends of the political spectrum over his criticisms of a Gold Star family. (Captain Humayun Khan was killed in Iraq protecting members of his U.S. Army unit from suicide bombers.)

The brouhaha has also spawned multiple attempts to discredit Khizr Khan as a form of agent provocateur, everything from claims that he is an operative of the Muslim Brotherhood to attempts to link him to the government of Saudi Arabia and Hillary Clinton:

In that latter vein, the unreliable Breitbart asserted that Khizr Khan is "financially and legally tied deeply to the government of Saudi Arabia and to the Clintons themselves" through his former employment at a Washington law firm:

[U]ntil now, it looked like the Khans were just Gold Star parents who the big bad Donald Trump attacked. It turns out, however, in addition to being Gold Star parents, the Khans are financially and legally tied deeply to the industry of Muslim migration — and to the government of Saudi Arabia and to the Clintons themselves.

Khan ... used to work at the law firm Hogan Lovells, LLP, a major D.C. law firm that has been on retainer as the law firm representing the government of Saudi Arabia in the United States for years.

The government of Saudi Arabia, of course, has donated heavily to the Clinton Foundation.

The first and and most glaringly obvious problem with this narrative is that Khizr Khan didn't ever work for the Hogan Lovells law firm. He was employed for seven years (from 2000-07) at the Washington, D.C., office of Hogan & Hartson, a U.S.-based firm that — three years after Khan left their employ — merged with the London-based international law firm Lovells to form Hogan Lovells in 2010. And Lovells (where Khan never worked) had an office in the Saudi Arabian capital of Riyadh:

So according to Breitbart, Khizr Khan's "deep legal connection" to the Saudi government is that he was once employed by a law firm that, years after he stopped working there, merged to create a new law firm that is now doing work on behalf of the Saudi government. Completely missing from this narrative is any actual evidence that Khizr Khan himself was ever involved in performing any legal work on behalf of the Saudi government. (By Breitbart's standard, anyone who has ever worked at a McDonald's restaurant anywhere in the world has "deep business ties" to Saudi Arabia, as the fast food giant now has outlets in that country.)

Hogan & Hartson was not "his" (i.e., Khizr Khan's) law firm in any reasonable sense of that possessive word: he didn't hold any ownership share, he wasn't a partner, and he didn't even work as a lawyer there. During Khan's time with Hogan & Hartson, he was one of thousands of people employed at the huge firm, not as a lawyer but as a manager of litigation technology:

Many lawyers at Hogan Lovells remember the week in 2004 when U.S. Army Capt. Humayun Khan lost his life to a suicide bomber. Then-Hogan & Hartson attorneys mourned the death because the soldier’s father, Khizr Khan, a Muslim American immigrant, was among their beloved colleagues.

Khan spent seven years, from 2000 to 2007, in the Washington, D.C., office of then-Hogan & Hartson. He served as the firm’s manager of litigation technology. Although he did not practice law while at Hogan, Khan was well versed in understanding the American courts system.

The grace Khan summoned on stage wasn’t a surprise nor was it an act, his former colleagues said.

“He is a lovely man, and was a great colleague, and we all were devastated when his son was killed,” Helen Trilling, a long-time Washington partner, wrote in an email. “We were proud of the impressive speech he gave, but not surprised at its power, given what we know of his character.”

Warren Gorrell Jr., firm CEO emeritus, said that Khan is “the most genteel, gentlemanly person you’d want to meet.” Gorrell remembered when Khan’s son graduated from the University of Virginia and joined the service, and how proud his father was.

“When his son died, it was amazing the composure that Khizr had,” Gorrell said. “He totally accepted it was his son’s responsibility.”

Finally, the notion that Khizr Khan somehow has "deep financial ties" to Hillary Clinton through his previous work at Hogan & Hartson is a ridiculously tenuous form of "guilt by [distant] association." Khan was a mid-level, non-lawyer employee of one of the oldest and largest law firms in Washington, and one of that firm's 1,000 or so lawyers happened to be someone who provided tax advice to the Clintons. What are the odds of that? Not too long. Once again, what's missing from this narrative is any actual evidence that Khizr Khan was ever involved in peforming any legal work on behalf of the Clintons.

If we follow this conspiratorial train of thought, we find that ten to fifteen years ago, Khizr Khan worked as a systems manager for the same law firm as a lawyer who gave the Clintons some tax advice, and years later (after Khan had stopped working there), that firm merged with another firm that now represents the Saudi government, and the Saudi government also donated money to the Clinton Foundation, so ... clearly this Khan guy has "deep legal and financial connections" to Hillary Clinton and Saudi Arabia. Or something like that.

Completely lacking from this narrative is any actual evidence whatsoever that Khizr Khan has, or has ever had, any "deep legal and financial connections" to Hillary Clinton or the Saudi government.