MSNBC host Joe Scarborough claimed Donald Trump had inquired three times about the use of nukes during a foreign policy briefing. 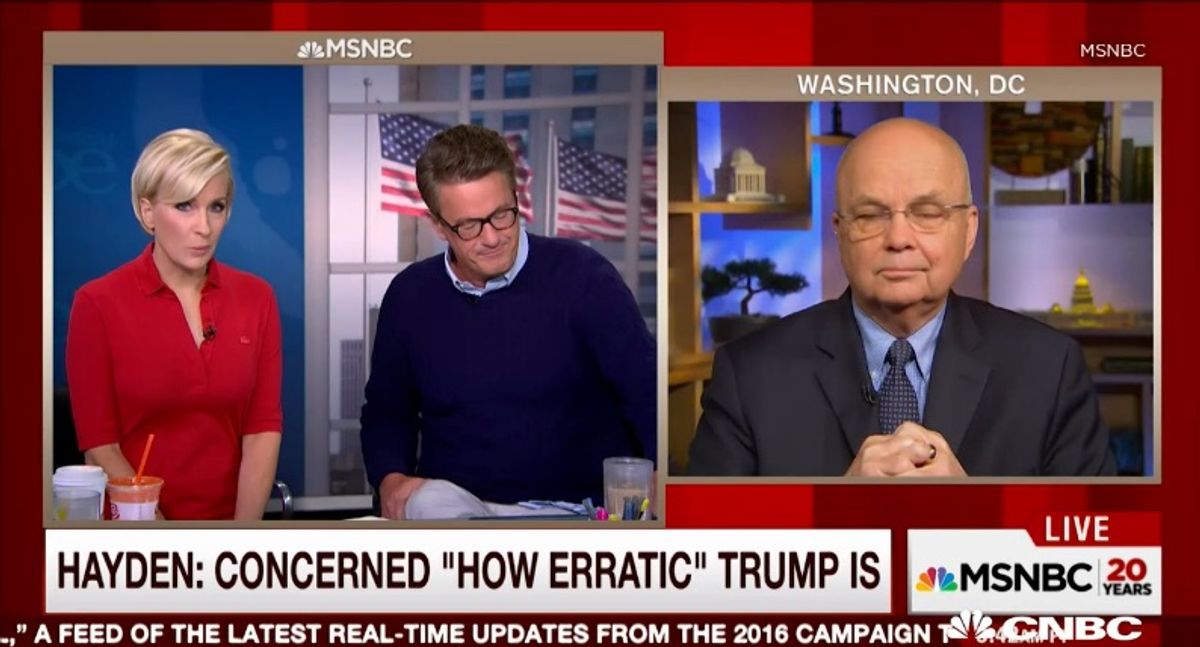 On 3 August 2016 MSNBC host Joe Scarborough shared an anecdote about Republican presidential nominee Donald Trump that captured the attention of the political news cycle, asserting that the candidate had asked three times during a foreign policy briefing about the possibility of employing nuclear weapons:

Donald Trump asked a foreign policy expert advising him why the U.S. can't use nuclear weapons, MSNBC's Joe Scarborough said on the air, citing an unnamed source who claimed he had spoken with the GOP presidential nominee.

The claim was certainly vague, citing unnamed sources and offering little context as to what had purportedly led Trump to "ask three times" why the United States "couldn't use" nuclear weapons during a briefing that took place "several months" earlier:

Scarborough said he was unable to disclose more about the statements purportedly made by Trump, adding:

I’ll have to be very careful here. Several months ago, a foreign policy expert on [the] international level went to advise Donald Trump, and three times he asked about the use of nuclear weapons. Three times he asked, at one point, if we have them, why can’t we use them? That’s one of the reasons he just doesn’t have foreign policy experts around him. Three times, in an hour briefing, why can’t we use nuclear weapons.

[Scarborough was apparently referring to a briefing given by a private foreign policy expert engaged by the Trump campaign several months ago, not one of the government-sponsored intelligence briefings commonly held for major party nominees.]

On first glance, it sounded as if Scarborough were party to the conversation in some fashion, or at least was contemporaneously made aware of the claim. However, the Huffington Post reported that the rumor only made it to the host of Morning Joe recently, despite the conversation in question's having purportedly occurred "several months" prior:

Scarborough told the anecdote amid an interview with former CIA director Michael Hayden, who said he could not see himself voting for the “inconsistent” and “dangerous” GOP nominee. Asked if he was aware of anyone among his peers who was advising Trump, Hayden said “no one.”

Scarborough learned of the exchange “in the last few days,” according to an MSNBC executive.

That article's secondary headline stated: "If this is true, it’s truly shocking." But while the claim certainly turned heads, it's worth noting that Scarborough was not a party to the conversation. An MSNBC executive said that Scarborough heard the tale "days" before repeating it, but the source and provenance of the anecdote were unclear.

Scarborough and co-host Mika Brzezinski were targeted by former Democratic National Committee chair Debbie Wasserman Schultz in a controversial e-mail she sent to Chuck Todd (host of MSNBC's "Meet the Press Daily") attempting to influence their programming, released as part of Wikileaks' DNCLeaks.

In that e-mail, the former DNC chair pressured Todd to "stop" Morning Joe hosts from covering the Democratic primary in a manner which she did not approve of. The leak contained other indications the DNC had coordinated with MSNBC on messaging.