Skydiver Sets Record for Highest Jump Without a Parachute

Renowned skydiver Luke Aikins became the first man to jump from an airplane at 25,000 feet without a parachute, landing safely in a giant net. 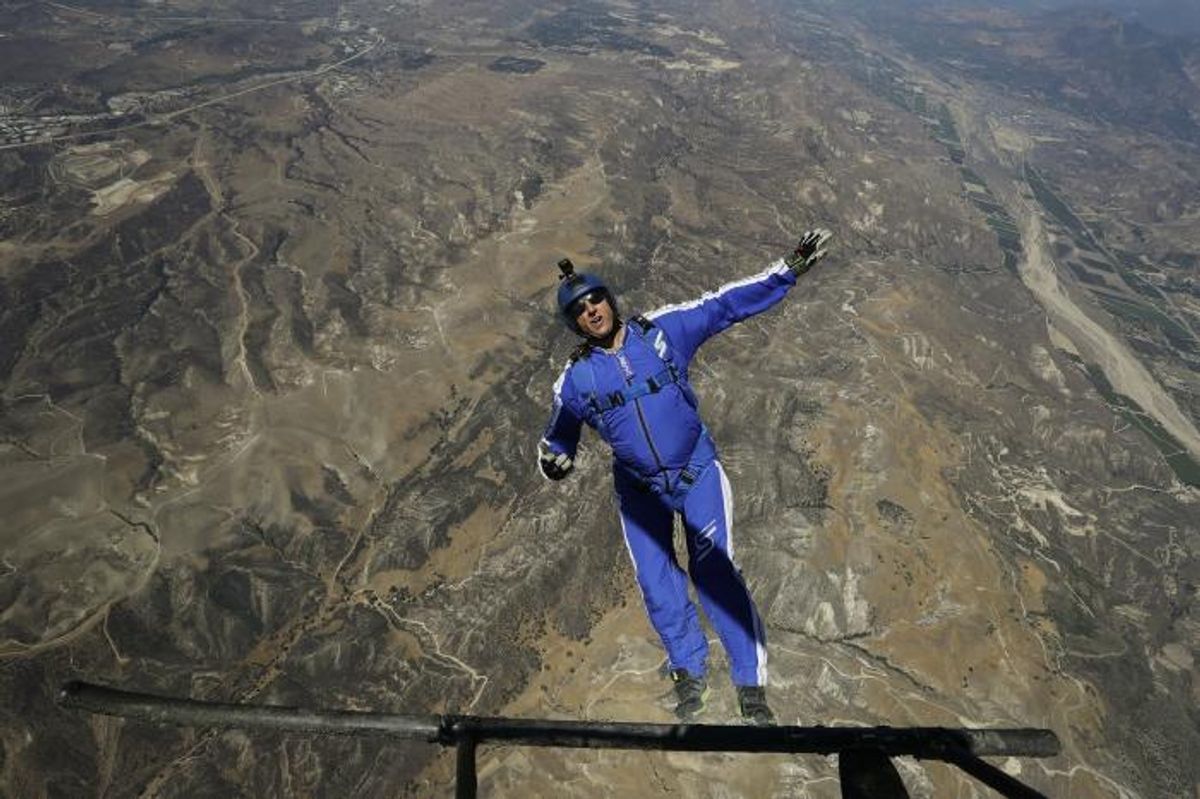 Luke Aikins leapt into the sky from an airplane at 25,000 with no parachute or wingsuit and became the first skydiver to land safely on the ground in a net. Aikins directed his body in free fall using only the air currents around him to land safely on a high-tech 10,000-square-foot net: According to Deadline, last-minute objections by the SAG-AFTRA union almost forced Aikins to wear a parachute for his stunt:

But Aikins hadn’t practiced the stunt with a parachute, and as the plane approached 11,000 feet on the way up, he expressed concern about having to wear one, and how it might affect his freefall and landing.

“Less than 24 hours ago, I was informed that I’m gonna have to wear a parachute to do this jump,” he said. “That adds a complication that didn’t exist before. I was clean and I was gonna land on my back. The powers that be have decided that it’s safer for me to wear a parachute.”

Everyone involved with the stunt was angry. To them it’s like a union telling a trapeze artist or a high wire act they can’t perform without a net — only in this case, Aikins was working with a net.

But as the plane rose to 25,000 feet — just minutes before the jump — the show’s announcer told the viewing audience: “Seconds ago we received word that the restriction to wear a parachute has been lifted.”

Aikins fell for about two minutes above the California desert, appearing to soar effortlessly, arms extended, face downward. And as he neared the ground, with a mere second to go, he expertly flipped onto his back and landed without incident.

He then climbed out of the net and embraced his wife, Monica, who was among a cheering group of family and friends, including their 4-year-old son, Aikins' dad, two brothers and a sister, who'd all anxiously watched the breathtaking spectacle.

Aikins, who said during the broadcast that he'd been preparing for this jump for two years, had previously done 18,000 parachute jumps and performed a variety of stunts, including for Iron Man 3.

Back on the ground with his wife and family, Aikins seemed both awed and stunned by his history-making achievement: "I'm almost levitating, it's incredible," he said. "The thing that just happened. The words I want to say I can't even get out of my mouth. All of these guys, everything that made it happen ... It's awesome."

Aikins' stunt brought people here looking for video of a previous parachuteless plunge by a skydiver onto a trampoline, but that video was a bit of fakery created for a trampoline park advertisement.