The GOP candidate was claimed to have performed an unflattering impression of Serge Kovaleski, who suffers from a congenital joint condition, at a South Carolina rally. 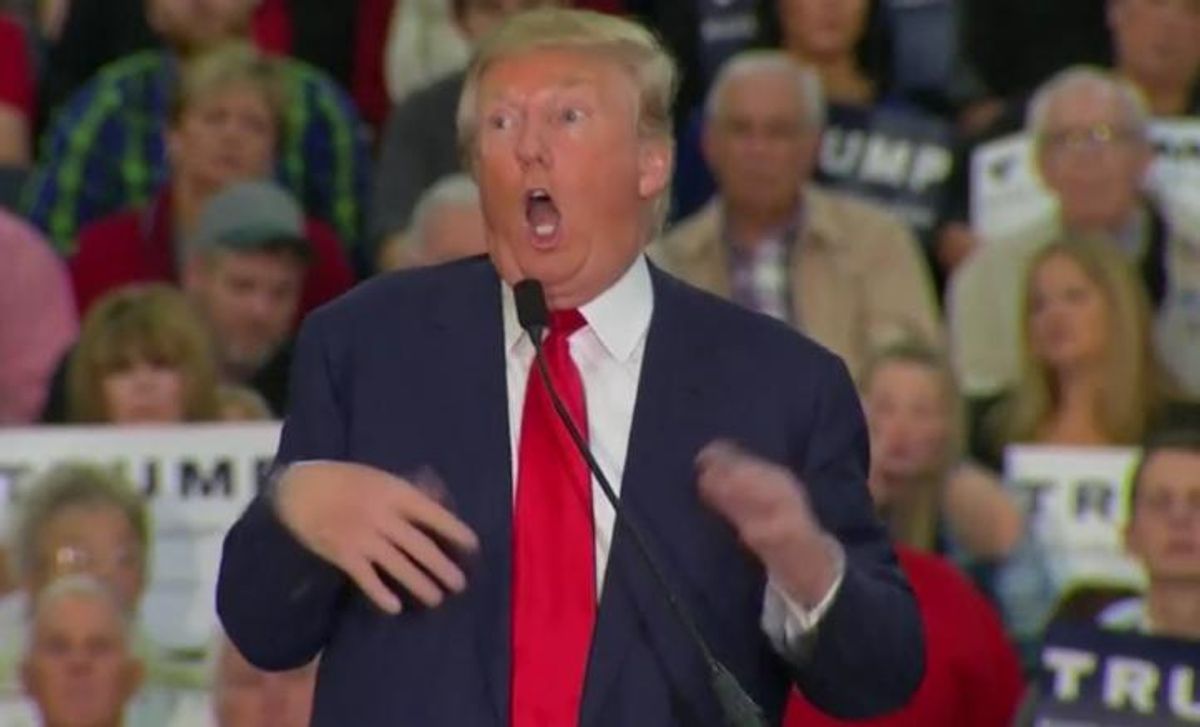 In November 2015, shortly after a series of coordinated terrorist attacks occurred in Paris, France, Republican presidential candidate Donald Trump was on the campaign trail in Alabama. Trump referenced the Paris attacks by invoking the 9/11 terrorist attack on New York in 2001, in the process not only repeating the long since debunked claim that crowds of "Arabs" (or "Muslims" or "Palestinians") were seen in local streets cheering the attack, but claiming that he had personally witnessed the phenomenon:

Shortly afterwards, defending his remarks during an appearance on This Week with George Stephanopoulos, Trump maintained:

After Trump was widely criticized for attempting to pass off an urban legend as fact, the candidate responded by citing as proof of his claim an 18 September 2001 Washington Post article by reporter Serge Kovaleski that made passing reference to "people who were allegedly seen celebrating the attacks":

In Jersey City, within hours of two jetliners' plowing into the World Trade Center, law enforcement authorities detained and questioned a number of people who were allegedly seen celebrating the attacks and holding tailgate-style parties on rooftops while they watched the devastation on the other side of the river.

When Kovaleski pointed out that there were never any reports (not even unsubstantiated ones) of "thousands" or even "hundreds" of people celebrating the 9/11 attacks in the New York area, as Trump claimed to have witnessed, Trump countered with a retort in which he criticized the journalist for attempting to "back away" from his previous article and seemingly mocked Kovaleski's physical appearance.

Serge Kovaleski suffers from arthrogryposis, a condition which limits the movement of joints and is particularly noticeable in Kovaleski's right arm and hand. After referring to Kovaleski as "a nice reporter," Trump launched into an impression of him, pointedly flopping his right arm around with his hand held at an odd angle while saying (in imitation of Kovaleski): "Now, the poor guy, you’ve got to see this guy: 'Uhh, I don't know what I said. Uhh, I don't remember,' he's going like 'I don't remember. Maybe that's what I said'":

After Trump then became the center of a second, even bigger controversy for supposedly having callously mocked a disabled reporter in public (that Trump was mocking Kovaleski was undeniable, but whether he was specifically mocking Kovaleski's appearance and disability was a subject of debate), Trump asserted that the whole thing was just a coincidence — he had no idea who Kovaleski was and thus couldn't have been aware of his physical condition:

I have no idea who this reporter, Serge Kovalski [sic], is, what he looks like or his level of intelligence. I don’t know if he is J.J. Watt or Muhammad Ali in his prime or somebody of less athletic or physical ability. Despite having one of the all-time great memories, I certainly do not remember him.

I merely mimicked what I thought would be a flustered reporter trying to get out of a statement he made long ago. If Mr. Kovaleski is handicapped, I would not know because I do not know what he looks like. If I did know, I would definitely not say anything about his appearance.

Trump's claims to non-memory were widely considered to be disingenuous, as Kovaleski had covered Trump extensively while working for the Daily News from 1987 to 1993 and had interviewed and talked to the business magnate numerous times during that period:

Donald and I were on a first-name basis for years. I’ve interviewed him in his office. I’ve talked to him at press conferences. All in all, I would say around a dozen times, I’ve interacted with him as a reporter while I was at The Daily News.

The New York Times, Kovaleski's current employer, said in a statement that “We think it's outrageous that [Donald Trump] would ridicule the appearance of one of our reporters." Trump responded in familiar fashion, issuing a series of tweets in which he admonished Kovaleski to "stop using his disability to grandstand" and repeatedly disparaged the Times:

Somebody at the financially failing and totally biased New York Times said that, over the years, I have met Mr. Kovaleski. Serge Kovaleski must think a lot of himself if he thinks I remember him from decades ago — if I ever met him at all, which I doubt I did. He should stop using his disability to grandstand get back to reporting for a paper that is rapidly going down the tubes.