A tweet sent by Hillary for America about making history inadvertently utilized an image of a heartbroken Bernie Sanders supporter. 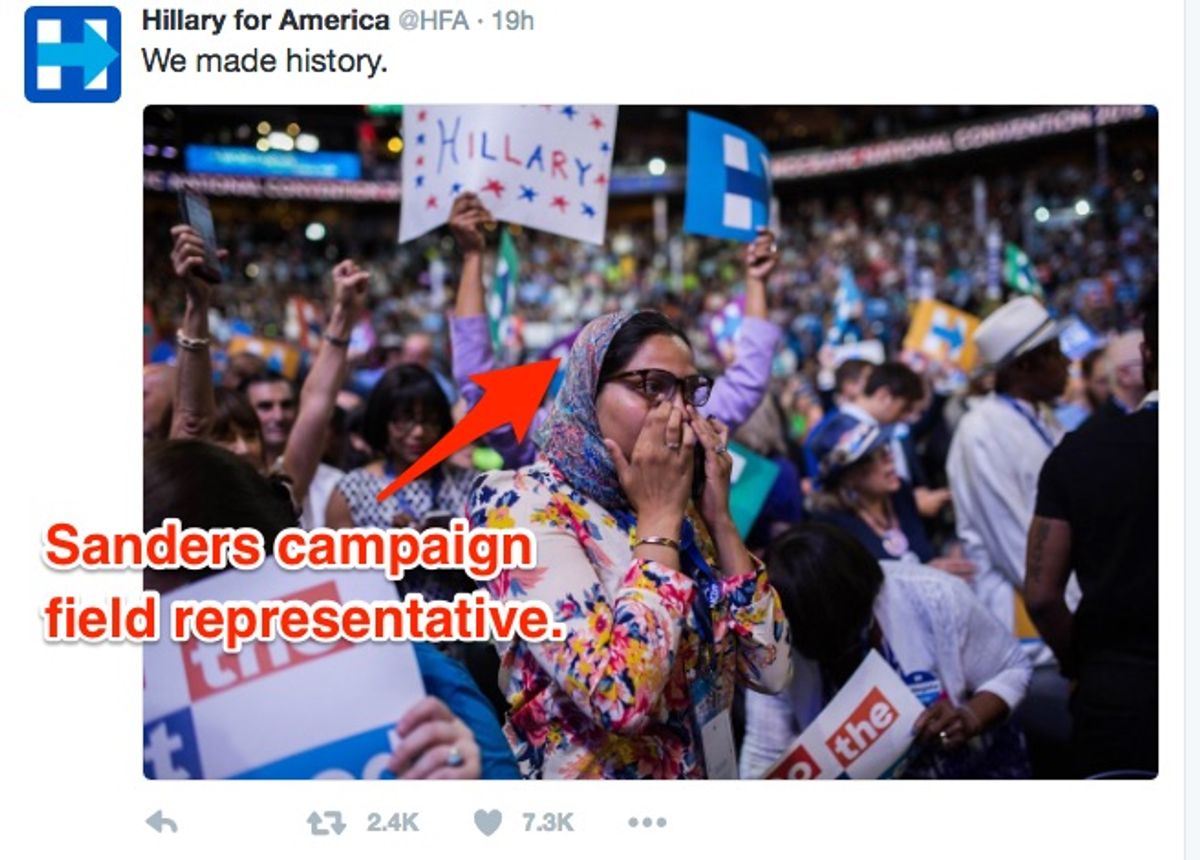 On 26 July 2016, Hillary Clinton received the official nomination of the Democratic Party as their candidate in the 2016 presidential election.

Among tweets sent or retweeted by Clinton's official account was one of a woman crying, ostensibly with joy due to the nomination of America's first female major-party candidate:

Simply stating Clinton "made history," the image was one of several captured at a busy Democratic National Convention. Actor and Sanders supporter Shailene Woodley quickly spotted the photograph and responded, as did others from the Sanders delegation, to point out that the crying woman pictured was actually a disconsolate Sanders supporter and not an overwhelmed Clinton fan:

this is my friend, a proud #BERNIESANDERS supporter whose photo was used to paint a false picture. @HFA @YoNithaa https://t.co/8Tse2NK93f — Shailene Woodley (@shailenewoodley) July 27, 2016

Except she is a delegate, former staffer and someone who has given speeches for Bernie. She's all in. https://t.co/We1PY7mZci

In other news, this is @YoNithaa — who campaigned for @BernieSanders and still supports him #DemsInPhilly https://t.co/E9IJ172iT6

The crying woman depicted was identified as Nida Allam, a regional field director for Sen. Bernie Sanders campaign. She also responded to the tweet stating she was "#stillsanders":

Allam later verified to the Huffington Post that her tears were not ones of joy, adding that she planned to support the Democratic nominee in November but continue working towards Sanders' vision:

Allam [said] she thought Clinton’s campaign was wrong for “trying to shape me as a poster for her, using my hijab and ethnicity to her advantage without verifying.” “I’m a strong Bernie supporter who will support the nominee from our party in November,” Allam said. She added that Clinton’s campaign misconstrued “my raw emotions as support for her when it is truly the emotions of a years worth of hard work and dedication to the revolution, and realizing that though the campaign is over, the revolution has just begun.”

On 27 July 2016, Allam invited fellow Sanders supporters to a campaign-related event and re-tweeted images of the DNC Walkout:

@YoNithaa if you're free today... you can join our group photo!!!! We'll put you right in front!! Get here by 4pm ? pic.twitter.com/VFCXAp27Qt

1,000+ delegates walked out of the #DemConvention to protest the corruption/fraud in the DNC. #DemsInPhilly #DNCleak pic.twitter.com/X3WdgyFanq — RoseAnn DeMoro (@RoseAnnDeMoro) July 27, 2016

Nida Allam told the Huffington Post she believed Sanders supporters "must continue to work to elect representative and senators who support Bernie’s platform."