The GOP presidential nominee raised some eyebrows by pledging support for a non-existent section of the U.S. Constitution. 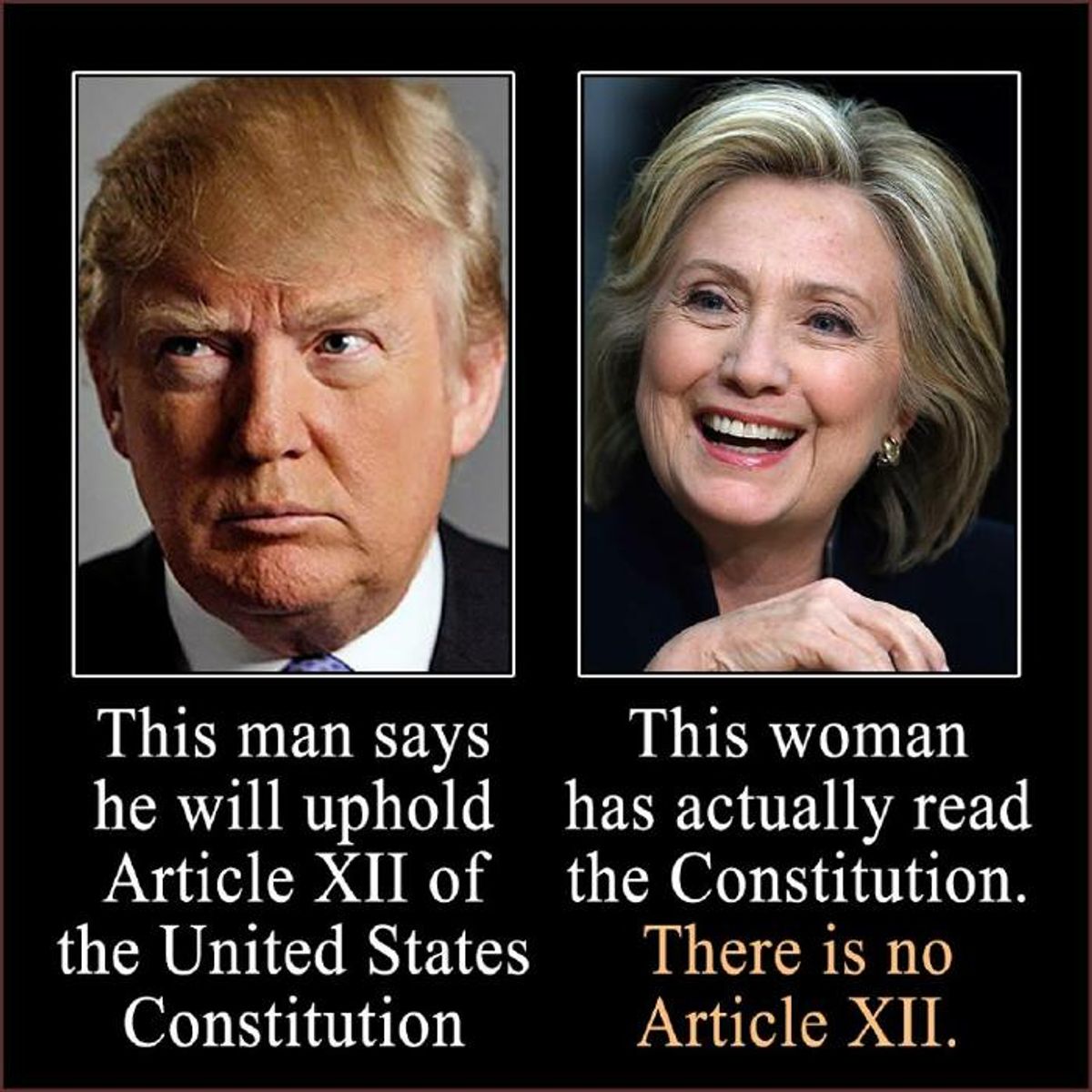 On 7 July 2016, a few weeks ahead of the Republican National Convention that would officially make him the GOP presidential nominee, Donald Trump met with members of Congress — with mixed results — in an attempt to solidify their support for him in the upcoming campaign:

Presumptive Republican presidential nominee Donald Trump leaned on GOP lawmakers to unify behind him during a pair of closed-door meetings with House and Senate Republicans on Capitol Hill that included tense exchanges with some of his skeptics in Congress.

Mr. Trump’s charisma impressed some GOP lawmakers, according to some members who were present, but he encountered pushback from others about his most contentious remarks about Hispanics, his criticism of other Republicans including Sen. John McCain of Arizona, such foreign leaders as the late Saddam Hussein and other topics that have given many Republicans heartburn and Democrats election-year fodder.

While some Republicans said his appearance boosted their level of comfort with him as the party’s likely candidate, his skeptics still didn’t appear ready to convert after Mr. Trump’s meeting with more than 215 House Republicans and many Senate Republicans.

According to the Wall Street Journal, Trump raised some eyebrows during those Congressional meetings when he expressed his support for portions of the U.S. Constitution, including the non-existent Article XII (that hallowed document has 27 amendments but includes only seven articles):

At a closed-door meeting with House Republicans, Mr. Trump took a question about the U.S. Constitution. House Republicans have been especially focused [on] Article I, which spells out the powers granted to Congress, because of concern about overreach by the executive branch. This concern has been acute during President Barack Obama’s time in the Oval Office.

“It wasn’t a surprise to anybody that he might get a little bit ahead of himself regarding to the number of articles that exist in the Constitution,” said Rep. Mark Sanford (R., S.C.), who wasn’t impressed with Mr. Trump in his visit. “There were a number of folks that looked at each other funny when he said ‘I’m for Article I, I’m for Article II, I’m for Article XII.”

Not everyone took the remark too seriously, however, noting that Trump was just speaking off the cuff in expressing his support for the entire Constitution and not a specific aspect of it:

Another Republican in the meeting, Rep. Mark Sanford (R-SC), [said] that Trump was asked pointedly if he would defend Article I of the Constitution.

Sanford said Trump's lack of knowledge about how many articles exist, gave him "a little pause." (The Constitution has seven articles and 27 amendments.)

"There wasn't a lot of substance, and I think at some point we got to get to substance in the most significant political position in the world," Sanford said.

Blake Farenthold (R-TX) dismissed the flub as little more than a small error.

"He was just listing out numbers," Farenthold said. "I think he was confusing Articles and Amendments. Remember, this guy doesn't speak from a TelePrompter. He speaks from the heart."