Charles Kinsey, caregiver to an autistic boy, was on his back with his hands in the air when he was fired on by an officer. 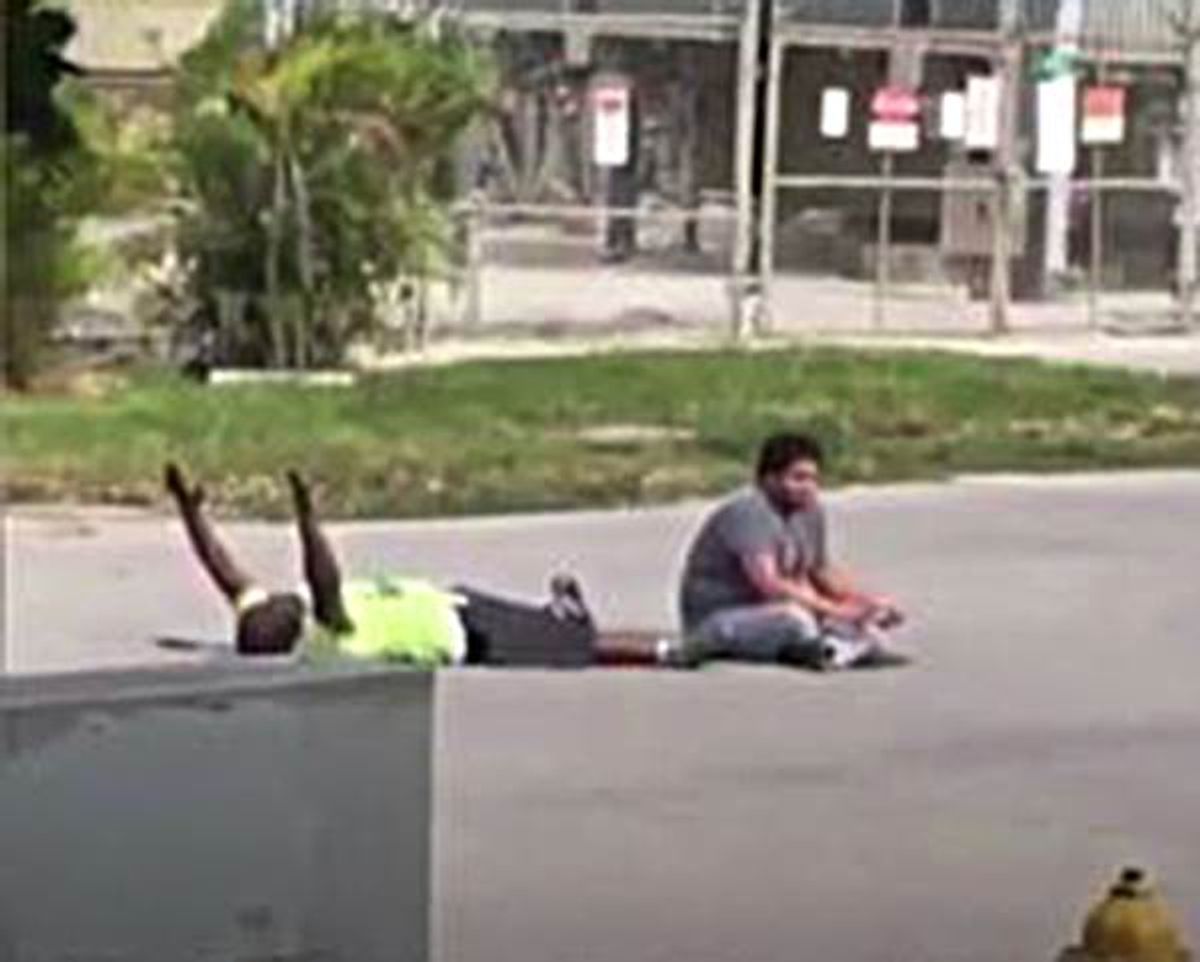 On 18 July 2016, North Miami police responded to a call about a suicidal man waving what appeared to be a gun.  Police Chief Gary Eugene told reporters:

Our officers responded to the scene with that threat in mind. We had witness statements that there was a gun. We had a 911 call with that same information.

However, I want to make it clear, there was no gun recovered.

Police arrived at the scene to find a young white man with autism clutching a toy truck.  He was with his caregiver, Charles Kinsey, a black man.  Kinsey tried to defuse the situation, first attempting to calm his patient, then trying to explain to police that his patient had a toy truck, not a gun:

While Kinsey was lying supine with his hands in the air and the autistic man sat beside him, Aledda fired three rounds from an assault rifle, according to North Miami police. One bullet found a target — Kinsey.

In interviews, Kinsey said he repeatedly told police while he was lying on the ground that there was no weapon and not to shoot. Rivera said North Miami police couldn’t hear his cries. The union president didn’t know how far the police were from Kinsey.

The shooting took place about a block from the MacTown Panther Group Home at 1365 NE 128th St. It’s a slightly run-down home with a hibiscus hedge, a blue basketball hoop and a weed-filled planter.

At one point a blue minivan filled with special-needs folks pulled up and workers escorted them by hand into the home. Neighbors say it’s not uncommon for adults to go on walks around the neighborhood, often in groups and always with a caretaker. Kinsey was shot just around the corner from the home, in front of an electrical grid station.

Cell phone video from the scene shows Kinsey on his back with his hands in the air:

A spokesman from the police union told journalists that police were trying to shoot the autistic man, thinking he was a potential threat, and hit Kinsey instead. However, that didn't explain why they then cuffed him and left him face-down for twenty minutes before medical help arrived.

The officer who shot Kinsey has been identified as Jonathan Aledda, 30, who has been placed on administrative leave.  A high-ranking officer, Commander Emile Hollant, has been suspended for apparently making conflicting statements about the shooting to investigators.