Officials in Colorado issued a warning after an atypical field test appeared to detect THC in Hugo's drinking water, but the alarm was unwarranted. 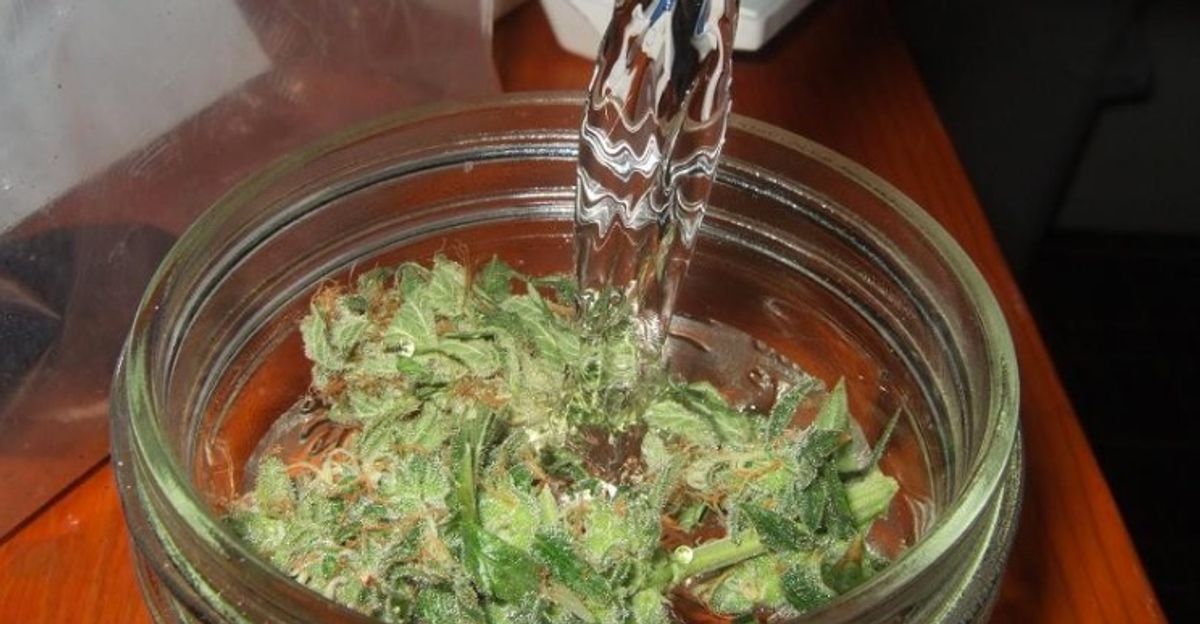 On 21 July 2016, the town of Hugo, Colorado, issued an unusual warning about their water supply after an inadvertent field test appeared to have detected THC (the principal psychoactive chemical in cannabis) in the jurisdiction's drinking water. Local officials used Twitter, in part, to keep Hugo's residents abreast of the THC-in-water situation:

The Lincoln County Sheriff's Office stated in a tweet that the testing had taken place after "complaints" of an undescribed nature:

#HugosWater Tests began after complaints, no level of concentration, water well #1 is still being investigation, no symptoms to anyone

Later that day, the department loosened the proposed restrictions somewhat — residents were originally advised not to use water for any purposes but were subsequently told it was safe to use water for showering, washing clothes, and cleaning dishes:

#HugosWater From CO Public Health- It is safe to shower, bathe, and washing clothing! We ask that you do not ingest the water. — Lincoln County S.O. (@LincolnCountySO) July 22, 2016

Finally, the Sheriff's Office said that more reliable testing results could be expected in the early afternoon on 22 July 2016:

The impact of the warning on local residents was significant, prompting the closure of restaurants and the cancellation of sports gatherings due to an initial "no showering" advisory:

[Hugo, on] Colorado’s Eastern Plains, warned its residents not to drink, bathe in or cook with its tap water on Thursday because officials said multiple preliminary tests of the water came back positive for THC, the main psychoactive compound in marijuana.

Residents were told not even to let their pets drink the water.

There have been no reports of illnesses or any symptoms of impairment from drinking the water, officials said at a news conference Thursday evening. Deeper tests, which could be completed Friday, are needed to verify the presence of THC and to determine the level of contamination, if any.

“We are checking to make sure this isn’t because of the field test kit — that it isn’t a false positive,” said Capt. Michael Yowell of Lincoln County Sheriff’s Office.

In a tweet embedded above, the Lincoln County Sheriff's Office said testing had been initiated due to "complaints," presumably about THC-infused tap water, but the Denver Post provided a slightly different account of how the discovery occurred. According to that newspaper, field tests performed on employees by a private company observed inconsistent results in employee drug screening. Due to the variability of drug test results, the company used tap water as a control of sorts and found that the liquid (presumably used in lieu of urine) tested positive for marijuana use:

Concerns about the water were first raised by a Hugo company using quick “field tests” to check employees for THC, Yowell said. The simple tests are similar in function to home pregnancy tests in that they can return only two results: positive or negative.

Yowell said the company, which he did not identify, had been getting inconsistent results and decided to test a vial of tap water, expecting it to be negative. Instead, the test came back positive, and the company called authorities.

The source or reliability of the "pregnancy test[-like]" units was unknown. Hugo's public information officer said that additional investigation led to the discovery of "forced entry" at a single well:

Yowell said Lincoln County officials conducted 10 other field tests, using two different types of test kits, on the town’s water and six came back positive. Authorities later isolated the positive results to a single well — well No. 1, about a mile south of Hugo’s small downtown. When sheriff’s deputies investigated, Yowell said, they found signs of forced entry at the well, though it is unclear when the damage may have occurred.

“I wouldn’t be doing my job for my community if we just wrote this off,” Yowell said.

Experts interviewed by the Denver Post were highly skeptical of the THC panic, noting that the amount of marijuana needed to taint a town water supply was implausibly prohibitive in cost, and that THC is well-known for poor water solubility (hence the popularity of "cannabutter" for marijuana edibles):

But others cast doubt on the dangers of THC-contaminated water or whether it’s even possible to spike tap water with marijuana.

“It would take more product than any of us could afford to contaminate a city water supply to the extent that people would suffer any effects,” Dr. John Fox, Lincoln County’s health officer, said in a statement.

Peter Perrone, who owns Wheat Ridge cannabis testing facility Gobi Analytical, said cannabinoids such as THC or CBD “are in no way soluble in water ... You know how oil and water separate? It’s the same with cannabinoids. They’re lipophilic, which means they’re fat-loving. They would never be soluble in water. In order for people to solubilize these cannabinoids in their drinks, for marijuana products like the Dixie Elixirs sold in dispensaries, it takes a lot of work. It takes so many steps to get a fat-soluble thing like a cannabinoid into something like a drink.”

The one thing that bothers me about this story from a scientific perspective is that THC is so insoluble in water ... I can’t imagine, I can’t even fathom the idea that THC would be in water at any type of solubility to create any kind of health hazard.

On 23 July 2016, the Lincoln County Sheriff's Office announced that laboratory testing had shown there was no THC in the town's water supply, contrary to what was reported after earlier field tests, and that the water advisory had been canceled effectively immediately:

We want to thank all Town of Hugo citizens for their patience and understanding during #HugosWater. All water activities are deemed safe!!!

The Colorado Department of Health & Environment issued a fact sheet about the situation, which includes resources for concerned citizens.