Lezley McSpadden, Mother of Mike Brown, to Speak at DNC

Lezley McSpadden will speak alongside other mothers at the Democratic National Convention (DNC), but she isn't headlining an event. 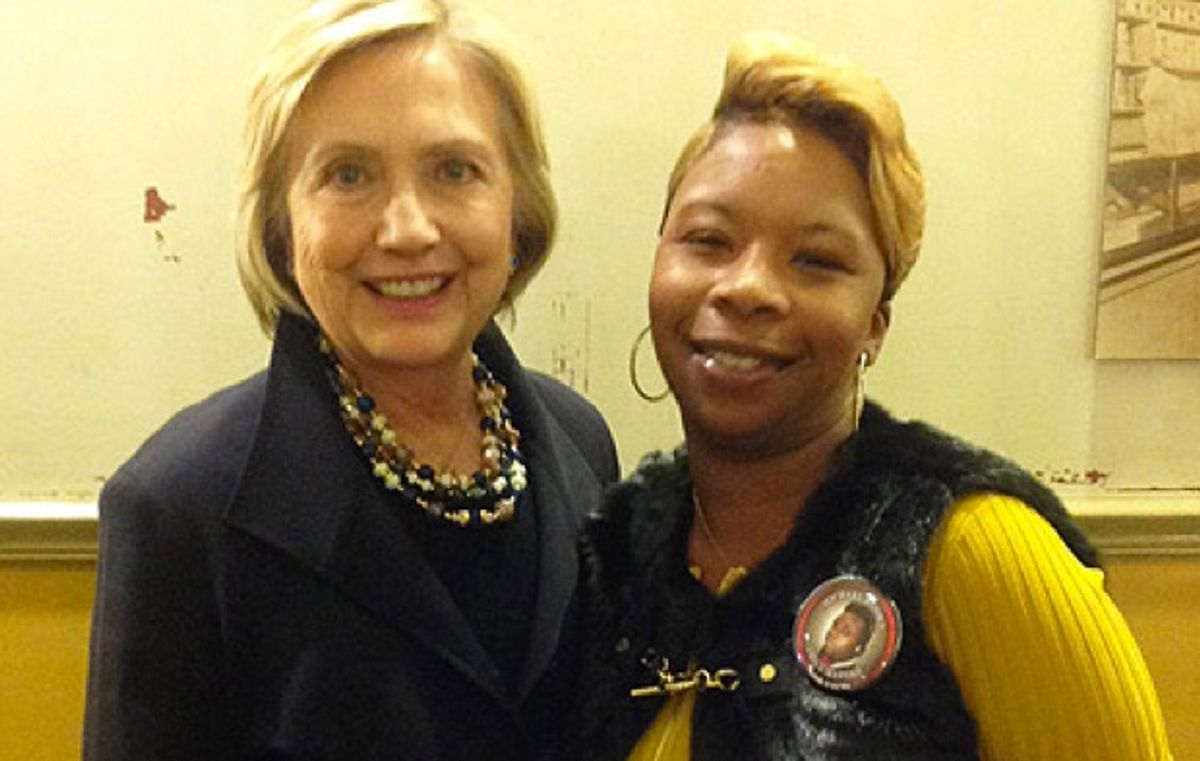 In July 2016, a number of social media users either lamented or questioned claims that the mother of Mike Brown (a black teenager controversially shot and killed by a white police officer in Ferguson, Missouri), Lesley McSpadden, had been invited by Hillary Clinton to speak at the Democratic National Convention (DNC).

One of the more prominent items published about McSpadden's purported speaking role appeared on The Blaze:

We already know that Democrat convention kicking off on July 25 will be a heinous pagan spectacle where the attendees will, as they’ve done in the past, cry out in rebellion against God and truth, and cheer as they hand the nomination to a lying crook who hates this country and everyone who lives here. That much we must expect. It’s hard to imagine that any specific moment will stand out as more debased or diabolical than the next, but I have an early candidate for that distinction: the headlining speech to be delivered by Lezley McSpadden, the mother of Michael Brown.

We’ve grown so accustomed to blatant race baiting and mob incitement on the part of the Democrats that this move may not seem extraordinary. Indeed, there appear to be very few people making a big deal out of it. And I admit it’s not necessarily surprising that today’s Democrat Party would honor the mother of a violent brute on such an important stage. But that doesn’t make it any less disgusting, especially considering the current climate.

For anyone who may have forgotten by now, Michael Brown was a thief and a thug who tried to kill Officer Darren Wilson. Video evidence, eye witness testimony, and forensic analysis have all confirmed — and both a grand jury and Obama’s own Department of Justice agreed — that Michael Brown was not the victim of a murderous cop. He was, on the contrary, a bully who viciously assaulted an innocent law enforcement officer.

A number of contemporaneous articles similarly criticized McSpadden and her son, so much so that readers became skeptical McSpadden had genuinely been slated to "headline" or speak at the DNC:

MIKE BROWN'S MOTHER TO SPEAK AT DNC CONVENTION - *AFTER SHE ROBS AND BEATS HER MOTHER-IN-LAW*https://t.co/7BdOfB1nYV @JohnMahr23

However, it is true that McSpadden is among several mothers of slain children slated to attend and speak at the Democratic convention. McSpadden is not "headlining" the event and is to be grouped with several other women as part of 26 July 2016's "A Lifetime of Fighting for Children and Families" day of themed speakers. (On 25 July 2016, the DNC's theme is to be "United Together" and feature Bernie Sanders, Michelle Obama, and an immigration activist). Fusion

The convention’s schedule lists the group “Mothers of the Movement” as featured speakers on Tuesday, July 25, alongside former President Bill Clinton.

The group is made up of the mothers of black men, women and children whose deaths turned them into martyrs and inspired the Black Lives Matter movement. Of the seven victims, four were killed in encounters with law enforcement.

The women in the group include:

› Gwen Carr, the mother of Eric Garner, who died in a chokehold administered by an NYPD officer.

› Maria Hamilton, mother of Dontré Hamilton, who was killed by a Milwaukee police officer.

› Lucia McBath, mother of Jordan Davis, who was shot by a man at a Florida gas station for playing his music too loud.

› Lezley McSpadden, mother of Michael Brown, who was killed by a Ferguson, Mo., police officer.

› Cleopatra Pendleton-Cowley, mother of Hadiya Pendleton, a Chicago teenager who was shot while in a park with friends.

› Geneva Reed-Veal, mother of Sandra Bland, who died in a Texas jail after being imprisoned for a traffic violation.

McSpadden remains active alongside other mothers of children shot and killed in recent years, and in May 2016 the Associated Press profiled a book she wrote about her son's life and death:

McSpadden said she had hoped [Officer Darren] Wilson would apologize, but he never did.

McSpadden has spoken before a United Nations committee at a human rights conference in Switzerland, appeared at presidential campaign events for Hillary Clinton and been featured in a Beyonce video with Trayvon Martin's mother and others holding photos of their slain loved ones.

"I just don't look at myself as being an activist or any of those things people try to label me as," McSpadden said. "I've always just wanted to be treated fair and equal, and that's what I'm fighting for, for my son right now."

The Atlantic also covered on the DNC's lineup and discussed the group of mothers' role in Clinton's campaign:

Former President Bill Clinton will kick off the second night, but it’s who’ll also be there that’s more notable: the Mothers of the Movement, most of whom have children who’ve died from gun violence, at the hands of police, or both. The women have served as powerful surrogates for Clinton in recent months, telling their stories in primary states and campaign stops all across the country. The New York Times described in April how their testimony has helped Clinton:

Having these women by her side has provided Mrs. Clinton with powerful and deeply sympathetic character witnesses as she makes her case to African-American voters. And they have given her campaign, an often cautious and poll-tested operation, a raw, human and sometimes gut-wrenching feeling.

The presence of the mothers has also proved a shrewd political move, influencing black leaders and lawmakers to back Mrs. Clinton.

Tuesday: A Lifetime Of Fighting For Children And Families
Featuring President Bill Clinton and Mothers of the Movement

It is true Lesley McSpadden is among "Mothers of the Movement" speakers slated for 26 July 2016's "A Lifetime Of Fighting for Children and Families" themed night at the DNC. She's listed along with the mothers of Eric Garner, Sybrina Fulton, Jordan Davis, Dontre Hamilton, Hadiya Pendleton, and Sandra Bland, not as a headliner but nor a highlighted speaker but as part of a large group of women who lost children and adult children in incidents that sparked the Black Lives Matter movement.