Say It Ain't So, Joe (DiMaggio)

Another example of why museum docents and tour guides aren't necessarily sources of accurate information. 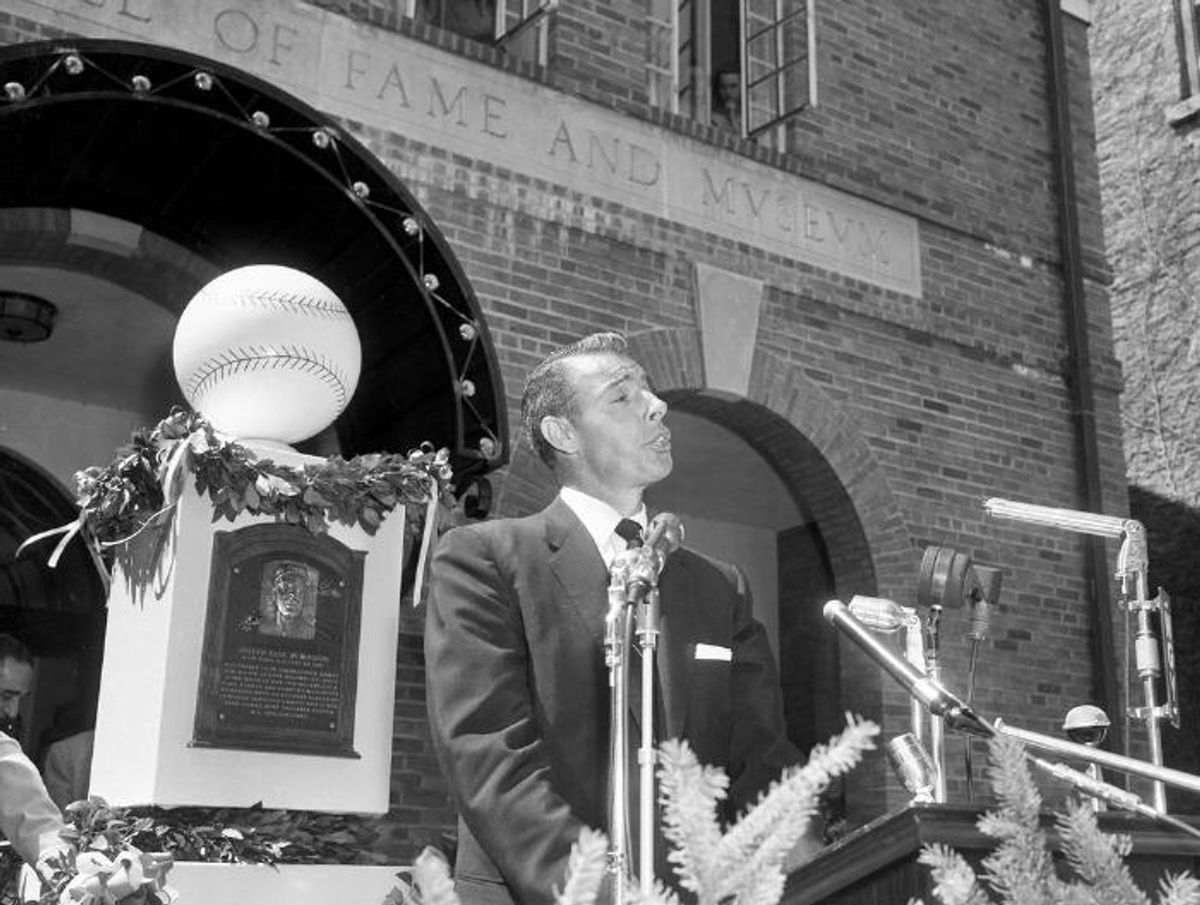 Earlier this year we penned an essay on the topic of why museum docents, tour guides, and company historians aren't necessarily reliable providers of accurate information (short answer: they're all just as susceptible to spreading entertaining misinformation and folklore as fact as most of us are). That piece detailed a real-life example of a docent's offering us what was clearly egregiously bad information during a tour of a local historical site and museum.

Today we'll skip reiterating all the preliminary exposition of that previous piece (you can read it here) and just launch into another example of museum misinformation.

Several years ago I finally undertook a long-awaited pilgrimage to that mecca of sportsdom, the National Baseball Hall of Fame and Museum founded in Cooperstown, N.Y., by Stephen Carlton Clark. Like so many fans before me, I spent a couple of days scrutinizing every exhibit, photograph, document, and other pieces of memorabilia on display at the museum, and then ... wondered what the heck else there was to do in Cooperstown. And again like so many fans before me, I ended up at the second-best-known attraction in town, the nearby Farmers' Museum.

The Farmers' Museum was also established by the Clark family foundation and is home to the infamous Cardiff Giant "petrified man,” a 19th century Historic Village, and the Lippitt Farmstead. The historic village features actors who present short plays and vignettes about historical events, characters, and folklore, and as I toured the village's early 19th century general store building, I heard the actor/proprietor who manned the counter there regaling every visitor who entered the store with the same tale. The proprietor's spiel was to recount a brief history of Stephen Carlton Clark's role in the establishment of the National Baseball Hall of Fame and the Farmers' Museum, and to note that after founding the former, Clark lived in New York City but didn't ever return to Cooperstown for the yearly induction ceremonies — save for one exception. That exception was the year Joe DiMaggio was inducted into the Hall, an occasion for which, the proprietor declared, Clark had returned to Cooperstown "in order to meet DiMaggio's wife, Marilyn Monroe."

I immediately recognized a chronological problem with that account. Although Joe DiMaggio retired after the end of the 1951 season, he didn't receive enough votes in the annual balloting to make the Hall of Fame until 1955. By the time his induction ceremony took place on July 22, 1955, he and Marilyn Monroe had long since separated, with Monroe having filed for divorce in October 1954 on the grounds of “mental cruelty.” Even though the pair remained on relatively friendly terms afterwards, Monroe wasn't present at the July 1955 ceremony that welcomed the Yankee Clipper into baseball's hallowed halls.

As news accounts of the event recorded, on that day Joltin' Joe was accompanied not by a glamorous starlet, but by the Yankees' general manager:

Joe DiMaggio, 40, befitting the superstar that he was, arrived at the ceremony with Yankees general manager George Weiss. They landed on Lake Otsego in owner Dan Topping's amphibious plane.

Finally, the crowd's patient was rewarded when the dapper DiMaggio walked to the podium, dressed in a black alpaca suit with a breast pocket handkerchief.

He paid tribute to his longtime manager with the Yankees, Joe McCarthy, and closed by referring to his induction, saying, "The last chapter has been written and now I can close the book." As he left the podium to go back to his seat, baseball commissioner Ford Frick, who had introduced him, went back to the podium. He said, "No, this is the last chapter of today's book, and this is the first chapter of the new edition."

Photographs and newsreel footage of the event also captured no evidence of Monroe's presence in Cooperstown that day:

No contemporaneous accounts of the ceremonies mentioned the presence of founder Stephen Carlton Clark in Cooperstown that day, either.

This spiel was an amusing tale, one which attempted to promote the National Baseball Hall of Fame by associating it with both one of its most famous members and one the biggest names in entertainment history. It was likely successful on that front, but the underlying story was nonetheless an apocryphal one that depended upon its listeners being too young to recognize it as such.