A viral Facebook post shared by a Homestead police officer claimed that a party of policeman paid the tab for a couple who refused to be seated near them. 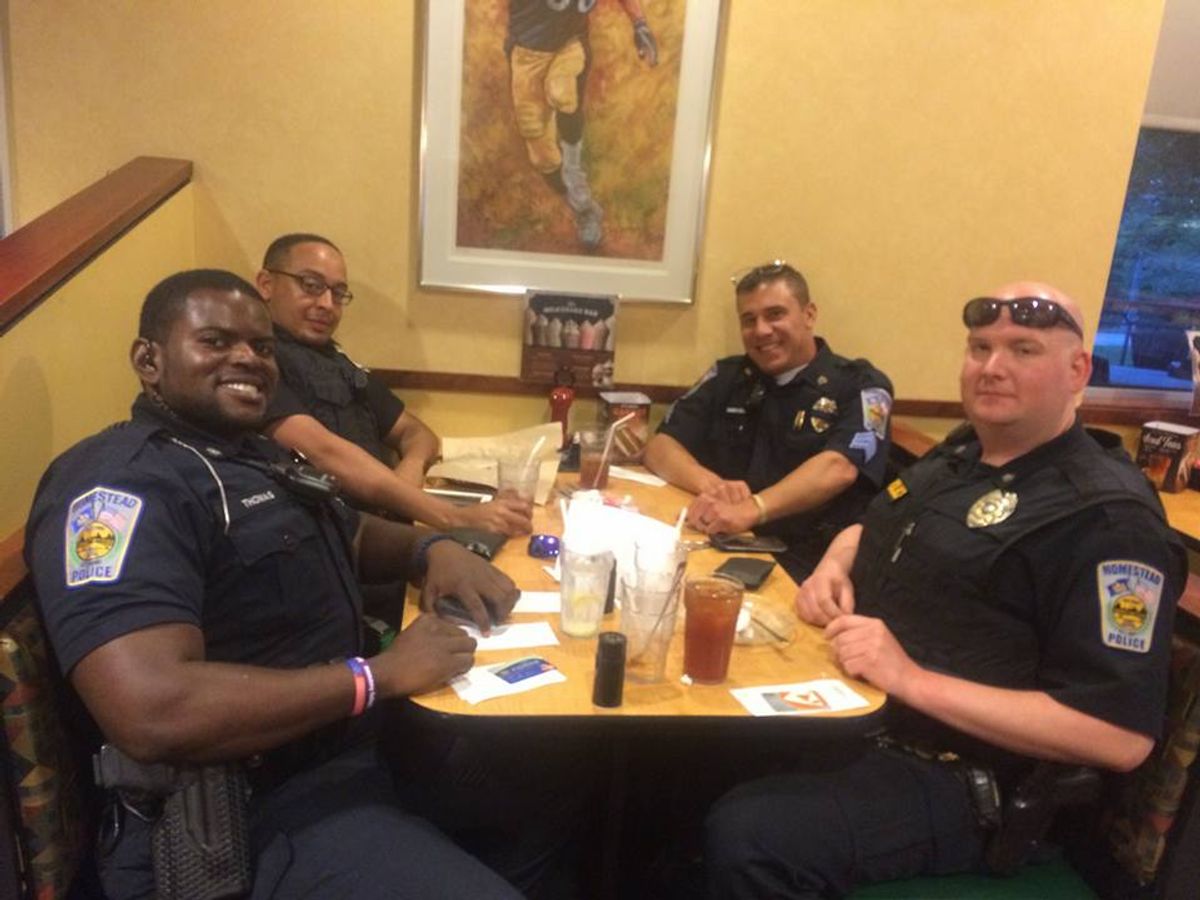 On 8 July 2016, a Pennsylvania police officer named Chuck Thomas wrote that he and a table of fellow policemen paid the tab for a couple who asked to be seated away from the officers (presumably due to increased animosity toward law enforcement):

Thomas included a photograph of a receipt at the Homestead/Waterfront Eat'n Park restaurant at 8:48 PM on 8 July 2016.  Thomas said he wrote the following on the receipt:

Your check was paid for by the police officers that you didn't want to sit next to.

Thank you for your support. Pittsburgh-area outlet WTAE picked up the story a few days later.  According to that outlet, the couple made it "obvious" they specifically wished not to sit next to police officers. However, no information ruling out other causes (such as noise, a draft, or proximity to the establishment's salad bar) was included to substantiate the claim. It appeared obvious the couple wished to be reseated, but less clear why:

A group of policemen from Homestead and Whitaker, eating at a Waterfront restaurant, paid a couple's bill after the couple made it obvious they didn't want to sit by the officers on Saturday.

"A table goes to sit down and the guy looks over at one of the police officers and was like, 'Nah I don’t want to sit here.' So they got moved completely opposite, away from the police officers," said Eat N' Park server Jesse Meyers.

Homestead police Officer Chuck Thomas said it was obvious the man and woman didn't want to anything to do with the police officers.

"I looked over and said, 'It's okay sir. You won't have to worry about it, we won't hurt you," Thomas said. "He looked at me hard again and said he’s not sitting here and walked away."

The claim was one of several that began appearing in late 2014 with the purported shunning of several NYPD officers at a Brooklyn Chipotle after the death of Eric Garner; an internal investigation by the chain revealed that the officers opted to leave of their own accord after a single employee made a "don't shoot" gesture. In September 2015, a cluster of "shunned policeman" claims surfaced again at a Texas Whataburger, a Philadephia Starbucks, and a Florida Arby's. The following month controversy erupted over an armed police officer at a Kansas City Olive Garden, and in November 2015 an old but similar dispute regarding armed law enforcement agents at Buffalo Wild Wings recirculated on social media.

As with the Homestead Eat'n Park claim, many of those viral debates stemmed from a mixture of public support for police and officers concerned about an unwelcoming public. (Thomas' claim appeared one day after the 7 July 2016 Dallas police shootings, during which five officers were killed and several more wounded, and just after a spate of high-profile killings by police and subsequent accusations of use of excessive force against civilians.) The rumors also created a nationwide impression that police officers were frequently being denied service.

We contacted Eat'n Park to ask about Thomas' viral post, and a representative confirmed what was reported: both Thomas and Meyers concluded that the couple didn't want to sit near police officers, and Thomas and his party paid the pair's check as a gesture of goodwill and to demonstrate that not all officers were bad.  It is true that a couple asked to be reseated at the Homestead Eat'n Park on 8 July 2016, and true that Thomas and fellow officers paid their tab, but the original motives of the couple remain unclear.