Former secretary of state Hillary Clinton wrote a column put out by 'The Toast' on the last day that web site actively published. 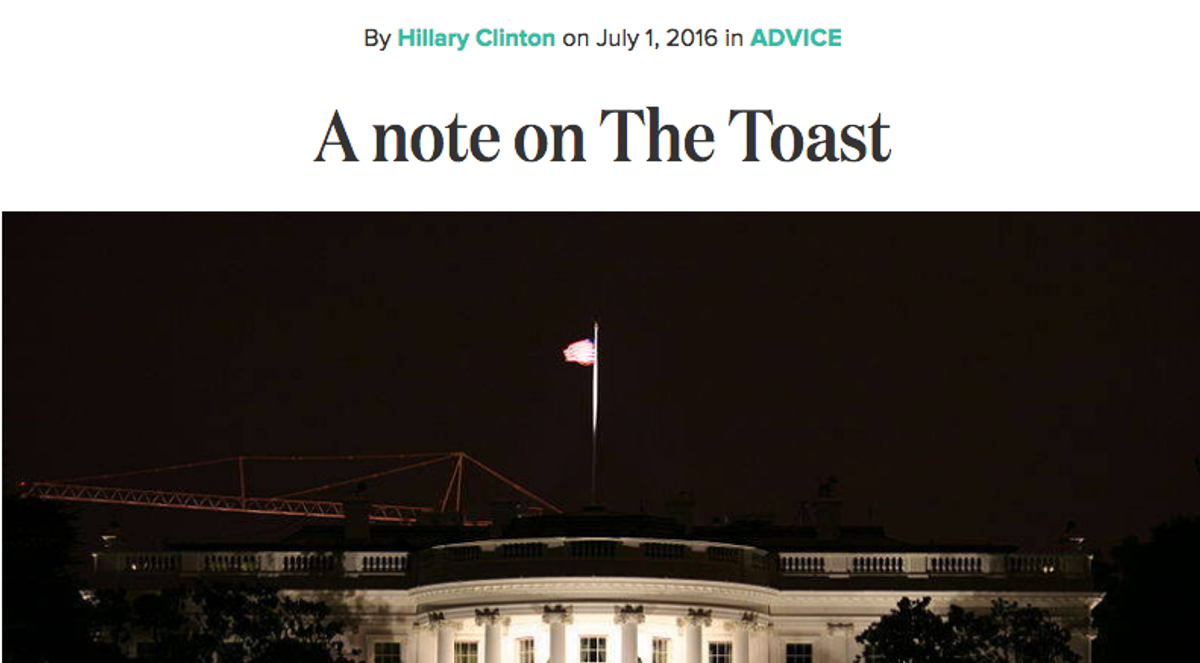 Web site The Toast was set to shutter forever on 1 July 2016, unexpectedly going out with a bang in the way of a column penned by former Secretary of State, former First Lady, and presidential candidate Hillary Clinton.

The Toast was founded in 2013 as an outlet primarily devoted to feminist issues, humor, and other related topics. In May 2016, the site's founders announced they would cease actively publishing content on 1 July 2016 due to factors including decreasing profitability and career obligations.

We found out Hillary Clinton reads the Toast maybe a month ago? I'm still not used to it. Anyhow, she wrote for us https://t.co/bRb7wpY556

the best part is that everyone who wants to fight about politics on the Toast is too late now, we're almost done for the day/forever

Published to the "Advice" category, Clinton's column was titled "A Note on The Toast" and opened with a statement from co-founder Nicole Cliffe:

This is not a joke. Hillary’s team had talked to me a few weeks back about doing something, but I didn’t want to do, like, a “If Hillary Were Your President” type thing, and then they got in touch on Wednesday and said she wanted to write something HERSELF (it seems her people show her Two Monks or what-have-you on long campaign days) and I said only if it was funny and they said “she was thinking more heartfelt?” and here we are. — Nicole

The former secretary of state's contribution was concise and deviated from the frequent satirical tone present in much of The Toast's commentary:

I know that today is the final day of The Toast, and I wanted to take a moment to reflect on what this space — and spaces like it — mean for women.

In nearly every industry, from publishing to scientific research, women have had to forge their own paths against overwhelming odds and less-than-friendly welcomes. When I arrived in the Senate in 2001, I was one of just 13 women, and I remember how thankful I was for my female colleagues on both sides of the aisle. My friend Barbara Mikulski famously started a tradition of dinner parties for all the women of the Senate. Over a glass of wine — okay, maybe three — we’d give each other support, advice, and highly relevant tips to navigate being in such an extreme minority.

Clinton also noted that two former writers for the site had gone on to contribute to her campaign:

Speak your opinion more fervently in your classes if you’re a student, or at meetings in your workplace. Proudly take credit for your ideas. Have confidence in the value of your contributions. And if the space you’re in doesn’t have room for your voice, don’t be afraid to carve out a space of your own. You never know — you might just be the next Nicole Cliffe, Mallory Ortberg or Nikki Chung.

Thank you, and as my friend Barb would say — keep giving them hell. We’re counting on you.

Commenters echoed the editors' surprise at the columns appearance:

I HAVE NEVER BEEN PANDERED TO SO EFFECTIVELY BEFORE

(I am glad to know at least one candidate has an official stance on The Toast. Probably the best weird thing to come out of this election.)

um do you want to join the slack group madam secretary

Asking if Hillary wanted to receive her fifty dollar freelancing payment via check or PayPal was one of the best moments of my life.

One commenter shared an anecdote about Clinton:

Hillary Clinton, If you are reading these comments:

A photo of you and my mom has sat on our mantel for the past 24 years. Circa 1992, you were touring some pediatric oncology wards. My brother was two years old and in one of those wards, being treated for leukemia.

The story goes, you showed up to the ward and did your rounds. One of the women you met was wearing a royal blue velour track suit. The story goes that you said "I hope your son makes a speedy recovery" and the woman in that really unfortunate blue track suit cried as you hugged her and shook her hand. That woman was my mother.

I'm sure you've met so many people in the course of your career as first lady and then senator, but I want you to know that my brother will turn 25 in a few months, and he is doing great, and there is still a picture of you and my mom shaking hands as she chokes back tears sitting framed on our mantel. During this entire campaign my mother has been an ardent Hillary supporter. When you ask her why, she has always said "I met her once, and she was a really lovely person, even though I cried on her."

And now I learn that you like two monks and published something on The Toast that caused me to let out a whole string of expletives (thank GOD no one else was in the office). We are not worthy. And because my mom never got to say it: Thank you.

Clinton also contributed a brief bio to The Toast for her first and last column:

Hillary Clinton is a former First Lady, senator, and Secretary of State, and is currently running for President. She thinks your hair looks great exactly as it is.

Clinton didn't promote her column via her own Twitter account, but the article created sufficient hubbub for The Toast to reach Twitter's trending topics shortly after the column was published.