The American Red Cross issued a statement apologizing for a pool safety poster that many criticized for being racially insensitive. 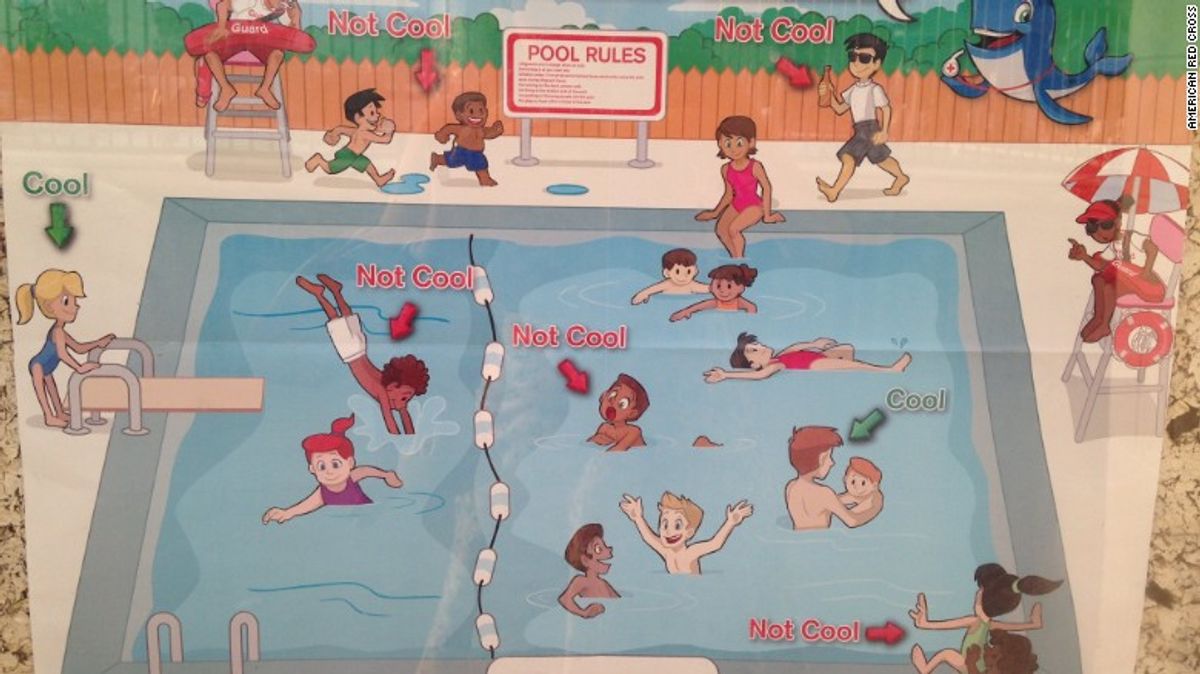 A water safety poster that was originally part of the Red Cross' 2014 "Aquatics Centennial Campaign" garnered widespread attention in June 2016 after it was spotted at the Salida Pool and Recreation Department in Salida, Colorado, and posted online via Twitter. Titled "Be Cool, Follow the Rules," the poster depicted youngsters in and around a pool engaging in various activities, some of which were identified with a red arrow and text as "not cool" (i.e., unsafe), and others of which were identified with a green arrow and text as "cool" (i.e., safe). All in all, the poster comprises seventeen pool-goers, ten of them light-skinned and seven of them dark-skinned (plus one lifeguard from each category). Two activities are labeled as "cool," both involving lighter-skinned kids: a blonde girl waiting to step onto a diving board, and an older boy supporting a younger child (presumably a sibling). Five activities are tagged as "non-cool": a (dark-skinned) boy diving into the pool (presumably bad because he didn't wait until the water was clear of swimmers first), two boys (one dark-skinned and one light-skinned) running along the slippery edge of the pool, one (dark-skinned) boy doing something whose uncoolness isn't quite clear (he appears to be shouting and/or faking drowning), one (light-skinned) boy walking around the pool with an open bottle, and one (dark-skinned) girl pushing another (light-skinned) girl into the pool. The other seven youngsters (four light-skinned and three dark-skinned) are depicted as simply swimming or otherwise enjoying the pool, which is presumably "cool" behavior even if not specifically labeled as such.

However, some versions of the poster that were circulated online cropped off the top portion, thereby eliminating the two light-skinned boys engaging in "uncool" activity and making it seem that only dark-skinned kids had been tagged as uncool.

Predictably, the original tweet touched off a social media argument over whether the poster was "racist" or simply an unremarkable display of multiculturalism:

Hey, @RedCross, send a new pool poster to @SalidaRec bc the current one they have w your name on it is super racist pic.twitter.com/TY8MmFB3Qk

@RedCross I don't find it racist. It's a multicultural poster citing the dos and donts of being at a pool. #ButtHurtGeneration

@JSawyer330 @RedCross @SalidaRec what the heck?? It's just kids being kids. All I see is kids. It's about safety!

Both the Red Cross and the Salida Pool and Recreation Department quickly tweeted that they were removing the poster from their web site and premises, respectively:

@JSawyer330 Thank you for bringing this to our attention. We’re removing this from our site immediately & are creating new materials.

@JSawyer330, We removed this poster within 24 hours. We didn't scrutinize it like we should have, and apologize for any offense.

In response to the brouhaha, the Red Cross issued a pro forma statement apologizing for any "misunderstanding":

The American Red Cross appreciates and is sensitive to the concerns raised regarding one of the water safety posters we produced. We deeply apologize for any misunderstanding, as it was absolutely not our intent to offend anyone. As one of the nation’s oldest and largest humanitarian organizations, we are committed to diversity and inclusion in all that we do, every day.

To this end, we have removed the poster from our website and Swim App and have discontinued production. We have notified all of our partner aquatic facilities requesting they take down the poster. Our organization has emphasized to our partners and on social media that it was absolutely not our intent to offend anyone and apologized for this inadvertent action. We are currently in the process of completing a formal agreement with a diversity advocacy organization for their guidance moving forward.

For more than 100 years, part of the Red Cross mission has been to help everyone be safe in, on and around the water. Countless lives have been saved with our water safety educational and aquatics programs. In order to further support our mission and dedication to inclusion, we launched our Aquatics Centennial Campaign (www.redcross.org/centennialswim) in 2014. We are working to reduce the drowning rate in 50 high-risk communities over a 5-year period by helping to teach at least 50,000 more children and adults to swim. With this campaign, we are focusing on areas with higher-than-average drowning rates and participants who otherwise wouldn’t have the opportunity to take swim lessons.

Once again, we apologize for any inadvertent misunderstanding with regard to the production of this poster, and believe we have taken every step to address the situation.

In response to our query, the Red Cross also sent us a similar statement over the name of President and CEO Gail McGovern:

As you may be aware, the Red Cross has been criticized for one of the water safety posters we produced. If you have seen the poster in question, then you know it is clearly unacceptable, and I sincerely apologize for its production and distribution.

I want you to know the Red Cross is doing everything in our power to fix the situation. We removed access to the poster from our website and the Swim App as of June 21. We have also reached out to each of the aquatics facilities across the country that received the poster and told them to remove it. Please know that we are looking closely at what steps were involved in the design and production of this poster, and how we can make sure something like this never happens again.

While I’m deeply concerned by this incident, I’m also very proud of our Learn to Swim program and the Centennial Campaign currently underway – which celebrates 100 years of the Red Cross teaching kids and adults to swim. We are working to reduce the drowning rate in 50 high-risk communities over a 5-year period by helping to teach at least 50,000 more people to swim. Anything that diverts us from our efforts to reduce the number of drownings is truly unfortunate.

While we have taken immediate action to address this situation, rest assured the Red Cross will learn from this incident as we move forward in our efforts to ensure we are a welcoming and safe place for everyone.

Thank you once again for your meaningful support of the Red Cross and our lifesaving mission. We are committed to fixing this situation and to being an organization that our wonderful donors, volunteers, employees and community partners can always be proud of.