Several have been killed and dozens more injured during protests against the country's education reform plans. 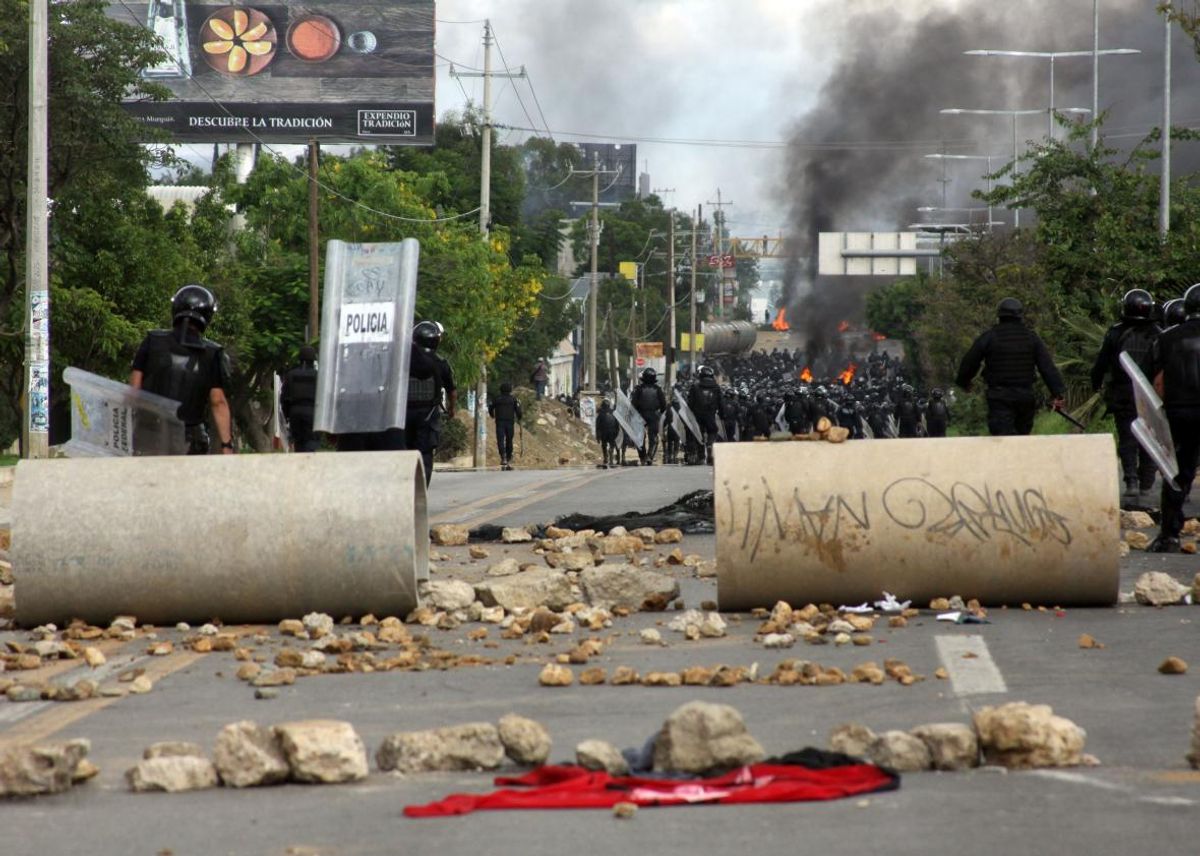 Mexico's southwestern state of Oaxaca has been the scene of ongoing  protests against governmental policies that have now turned deadly.  At least ten people were killed in clashes with local and federal police, including a journalist who was there to cover them.  Dozens more people —  both police and protesters — were injured.

The demonstrations began as a peaceful, months-long affair. Members of Coördinadora Nacional de Trajabadores de Educación (National Coördination of Education Workers, or CNTE), the largest teacher's union in the country, went on strike to protest education reform passed by the current administration. Those reforms would — among other things — require teachers to take standardized tests to evaluate their qualifications.

Reforms would also end "normal" schools, government-funded teacher training schools that serve in rural and impoverished (and heavily indigenous) parts of Mexico, and which provide alternate paths to those who might otherwise grow up working in the fields.  Normales have been around for a century, and historically are places people go to learn not just how to be teachers, but how to protest and challenge the government.

(The case of Ayotzinapa — the 43 teacher trainees who went missing in September 2014 — involved "normalistas," or students from a normal school in Mexico's Guerrero state.)

The Mexican government has responded to the protests by first taking professors into custody, and then, on 19 June 2016, firing bullets and tear gas into a crowd in the Oaxacan town of Nochixtlán:

“They were shooting at us as if we were animals”, William Velázquez, a 34-year old teacher, told FNL. He picked up a large stick. “These are the only weapons we have. We don't carry guns. They were firing on unarmed civilians.”

Protesters and the Mexican government have been trading blame over who was responsible for Sunday's clashes, with federal and state authorities claiming live ammo was used after unspecified 'radical groups' attacked policemen, after the dislodging of the protesters initially happened peacefully.

The authorities changed their version of the events several times, with interior secretary Miguel Ángel Osorio Chong initially claiming the police weren't carrying arms. Federal police chief Enrique Galindo later admitted his men did indeed carry guns. On Monday, Oaxaca governor Gabino Cué said in a press conference that the policemen adhered strictly to protocol and that force was used 'rationally' and with 'due respect to human rights'.

The clashes are reminiscent of the months-long strikes that ended in violence ten years before, also in Oaxaca.

In this case, the government initially denied that police were armed, but recanted after their accounts conflicted with news reports from the scene:

Mexico's Minister of the Interior, Osorio Chong, finally agreed to meet with members of CNTE to discuss the reforms.  Residents, who have blocked off the roads to the town, say they want police out. They have also started calling for autodefensas, or community-run civilian police forces.

Bacon, David. "Why Are Mexican Teachers Being Jailed for Protesting Education Reform?"   The Nation.   17 June 2016.