Hockey legend Gordie Howe died peacefully at the age of 88. 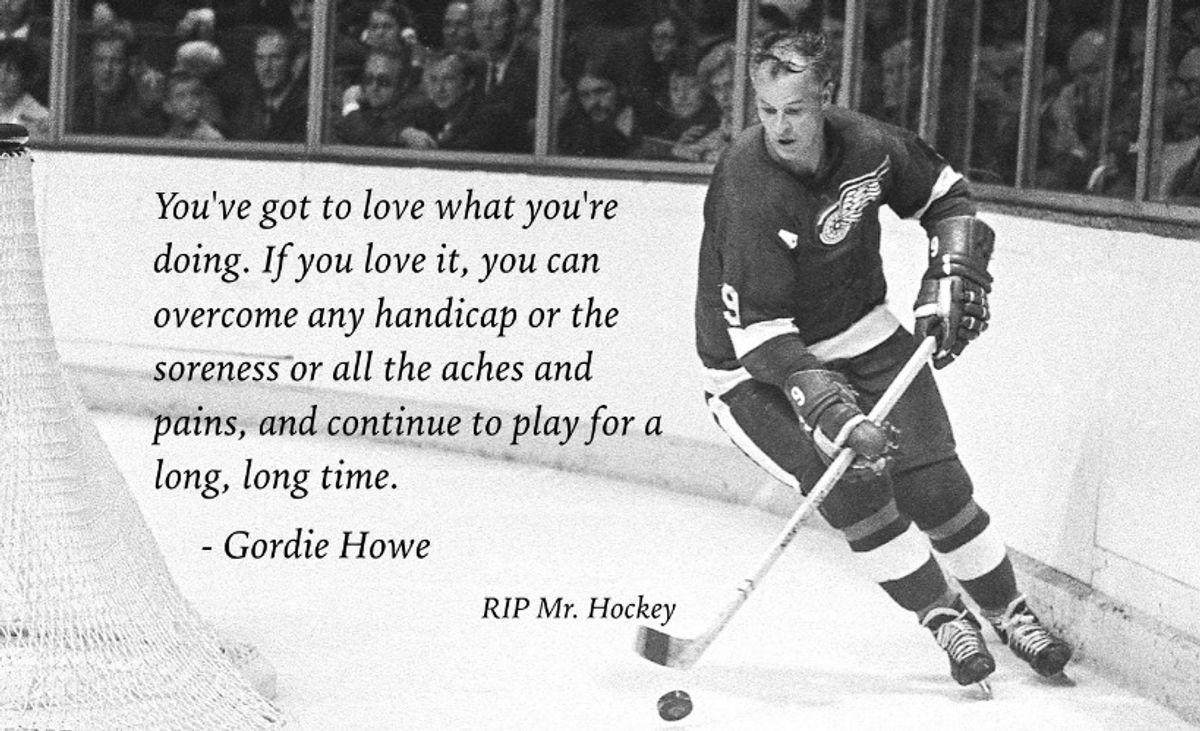 Gordie Howe, an athletic legend known as "Mr. Hockey," has died at the age of 88.  The hockey player's career unfolded over six decades, 25 years of which were with the Detroit Red Wings. Howe won four Stanley Cups, became known as one of hockey's greatest scorers, and for a time was the National Hockey League's all-time highest scorer (a record broken by Wayne Gretzky).

Gordie Howe was 44 and had recently retired from the NHL when he was invited to a Kiwanis Great Men of Sports dinner in the Canadian town of Brantford, Canada.

One guest of honor was only 11 years old but was already being touted as a future hockey superstar. Howe, always personable and patient with kids, smiled as he posed with the boy, hooking his stick around the chin and left ear of the slightly embarrassed youngster with the blond bangs.

The kid was Wayne Gretzky, who would go on to break Howe’s NHL record of 1,850 points in 1989. But Howe always maintained a prime place in fans’ hearts long after Gretzky passed his scoring mark ... known as “Mr. Hockey” for his enduring skills and the fierce competitiveness that inspired him to come out of retirement at 45 to play alongside two of his sons, died Friday, according to the Detroit Red Wings. He was 88.

“Mr Hockey left peacefully, beautifully, and w no regrets,” his son Murray Howe said in a text to the Associated Press.

The New York Times reported that Howe's return from retirement broke records, as did his unusually long tenure in a dangerous sport:

Playing before helmets were required, he endured numerous injuries and some 500 stitches in his face. He almost died during the 1950 playoffs when he crashed into the sideboards attempting to check Ted Kennedy, a star forward with the Maple Leafs; Howe sustained a fractured skull and required emergency surgery to relieve pressure on his brain.

Gordie Howe's cause of death has not yet been reported, although he had been fighting health problems in recent years, including a "significant" stroke in 2014.