Firefighters in Rhode Island claimed they were restricted from flying U.S. flags on their trucks, but the full details behind the controversy were missing from some news reporting. 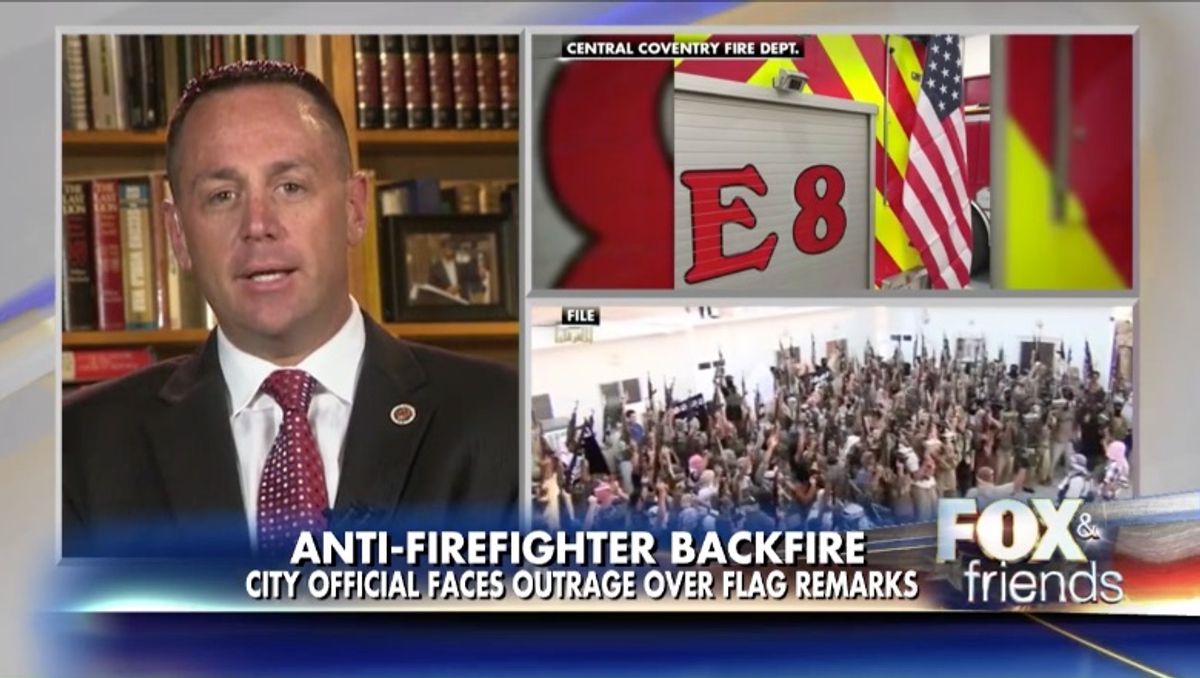 In late May 2016, news sources in Rhode Island began reporting on a minor controversy in the town of Coventry over the display of American flags on fire trucks. For example, the Providence Journal published an Associated Press article about the dispute, noting that at some point in 2015 firefighters had been "asked to remove" flags from their firetrucks, but that no actual order had been issued requiring the removal of flags from firetrucks:

The firefighters say [the controversy] started last year when Central Coventry Fire District Chairman Fred Gralinski likened their display of the flags on the back of the trucks to something the Islamic State group would do.

David Gorman, president of the firefighters' union local, says the district board recently adopted a policy that the fire chief must approve any stickers or decals applied on the trucks.

He says the policy made no mention of flags, but he says he's still being asked in private to remove them.

Gralinski says there's no order to remove the flags.

In late May 2016, the firefighters' union referenced the controversy on their Facebook page and thanked members of the public who had donated flags to them:

The issue gained additional prominence after a local news segment was published to YouTube in June 2016, which, as referenced above, included a man (purportedly Fire District Chairman Fred Gralinski) speaking in a voiceover who likened the displays of patriotism to those made by Islamic State (ISIS) members:

They look like a bunch of yahoos ... Like in the paper, like ISIS in Syria going to take over a city. I don’t think they need that big flag on the back of the truck. That’s not America to me. Those are a bunch of terrorists. So I’m going to ask you to take the flag off that truck.

A 27 May 2016 local Patch article provided a bit more context regarding acrimony between the union and the fire district board, which didn't appear to be limited to the subject of flags on firetrucks:

Amid days [of] flared tempers on social media as firefighters say they were ordered to remove American flags from fire trucks — and the Central Coventry Fire District's board chairman insisting otherwise — both sides have managed to hammer out an agreement to settle more than $1.4 million in outstanding claims.

The agreement, signed today by the union's President David Gorman, gives the union $282,289, which the fire district said is a savings of $1.2 million for Coventry taxpayers.

Patch quoted a news release issued by fire district manager Gayle Corrigan, which addressed the contract settlement issue before mentioning the flag dispute. The release cast a slightly different light on the issue of flags on fire trucks in general, asserting that local residents had complained about proper protocol with respect to the display of U.S. flags on firetrucks:

In a news release, [Corrigan] also said that the district "has equipped all of its fire apparatus with new American flags that replaced old, tattered and dirty flags which were on the trucks."

“I’d like to thank Tony DeQuattro of Operation Stand Down-Rhode Island for providing us with the correct protocols to ensure American flags on our fire trucks are afforded the respect they deserve,” Corrigan said. “I would also like to thank the taxpayers who brought the issue of dirty and dingy flags on our trucks to our attention and questioned us about proper flag etiquette. We now believe our trucks are in compliance.”

Other sites picked up and reiterated much of what had been said in the local news clip, absent much background information or reporting on a resolution to the issue that had occurred several days earlier:

Gralinksi, for his part, apologized for any “perceived disrespect” from his comments.

As the dispute gained national attention, firefighters and others publicly commented on the brouhaha via social media. Firefighters in Fairfax, Virginia, published a response to Gralinski's remarks on the Coventry firefighters' Facebook wall:

Comments attributed to local lawmaker Rep. Bobby Nardolillo also circulated on Facebook, but we were unable to locate record of Nardolillo's having made any such comments about the dispute:

On 6 June 2016, union president David Gorman appeared on Fox News' "Fox & Friends" program to discuss the controversy, in which Gorman appeared at the left of the screen with ISIS fighters and firetrucks to his right:

According to the summary of that segment, "[f]irefighters in Rhode Island will be allowed to keep American flags on their fire trucks." However, according to other sources it appeared the flag issue had been settled long before it made headlines outside Rhode Island, and issues of flag display protocol were at least a partial factor in the controversy.