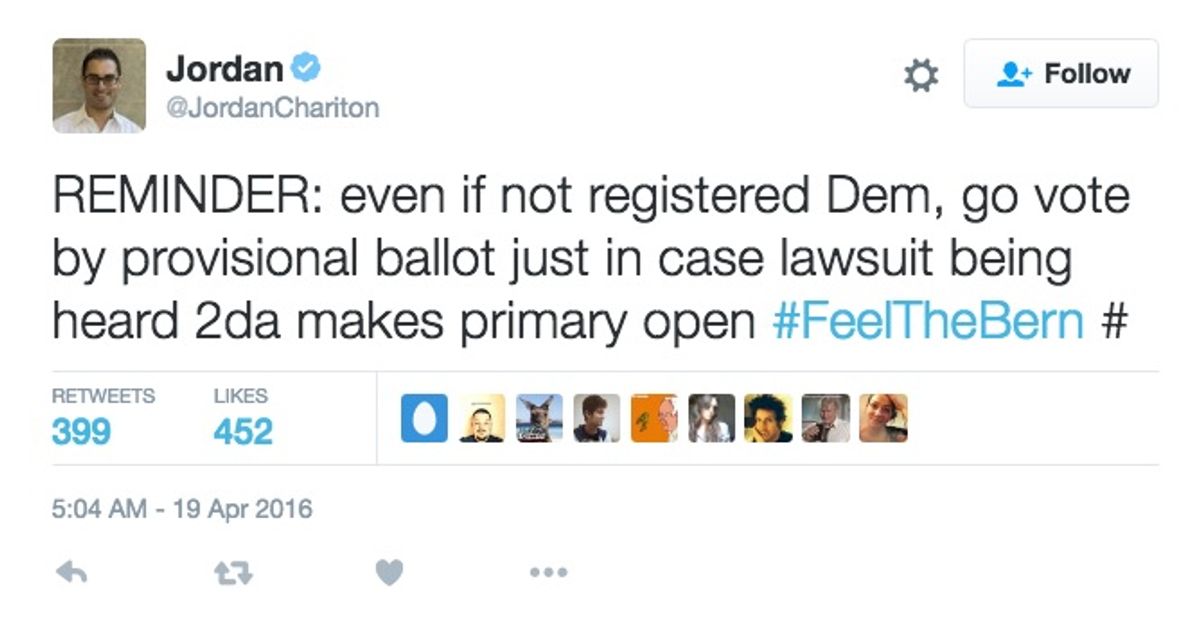 On 19 April 2016, a federal court judge in Central Islip, New York, heard a case brought by Election Justice USA over alleged voter registration irregularities. The voter advocacy group sought relief in the form of an open primary election. (New York State's primary elections have traditionally been closed, meaning only voters registered for the party which is holding the primary may vote.)

In the interim, Election Justice USA advised all voters ineligible via either due to error or their holding third-party/independent status to cast provisional ballots in the event the primary were to declared open and such ballots were counted:

Election Justice spokeswoman Shyla Nelson told an Examiner.com blogger that a larger than expected number of New York State voters reported disenfranchisement of some description, many of whom were counted in the suit:

In an interview, Nelson was confident that the advocacy group and New York voters would prevail in federal court, opening the primary up to the more than 63,000 known voters and more, rendered ineligible to vote the presidential primary by no action of their own. "We have been overwhelmed by the reports (they’re still coming in) and wanted to do whatever we can to include as many as possible in the lawsuit, so processed them up to the last minute before filing," Nelson said. "2000 pages were submitted today."

That blog paraphrased the complaint being heard on 19 April 2016 in Federal District Court in Suffolk County as follows:

Relying on established Constitutional and election law, the 25-page complaint and nearly 2000 pages of attachments declared the widespread and ongoing removal of eligible voters from the State of New York’s voter-registration roll or assigned incorrect party affiliations in violation of the National Voter Registration Act of 1993 and contrary to the Fourteenth Amendment of the U.S. Constitution in its guarantee of equal protection. “As a result, Plaintiffs who are eligible New York voters are likely to be deprived of the right to vote as have the thousands of similarly situated voters who have complained to the Board of Elections(NYBoE) regarding improper voter registration switches and purges,” read the complaint.

As the case was litigating, some early and incorrect reports of an open primary ruling were circulating on Facebook and Twitter:

@JordanChariton This is blowing up on FB now... Can you validate? pic.twitter.com/Hq7yYRIJXa — Jennifer (@Mattazmomma) April 19, 2016

As of 11:30 AM EST, the case was stalled due to all parties' not being present in the courtroom:

Just before noon, voters were informed that the hearing was moved to 2 PM EST:

In a Complaint for Injunctive and Declaratory Relief filed on 18 April 2016 [PDF], multiple plaintiffs alleged that their registrations had been changed without their knowledge or consent: The complaint held that the burden of proof lay with New York State's Board of Elections and not voters, and among requested redress was an order opening the primary to all voters irrespective of party affiliation: Defendants and give each county notice that they have to appear in court to defend their voter registration process (over 60 counties)...

NY Board of Election said they have nothing to do with the problems, are "not responsible for the counties" #NYPrimary — Jordan (@JordanChariton) April 19, 2016

Lawyers urge Dems who feel they have had registration changed wrongly should vote on provisional ballot since a new hearing has been granted — Jordan (@JordanChariton) April 19, 2016

#NYPrimary election judge says people who feel have been purged have remedy...go get court order in front of a judge

This article will be updated as additional information is gathered.

NYS primary the young turks board of elections
Read More