The Natural Environment Research Council opened up suggestions for the ship's name to the internet, which wildly exceeded expectations. 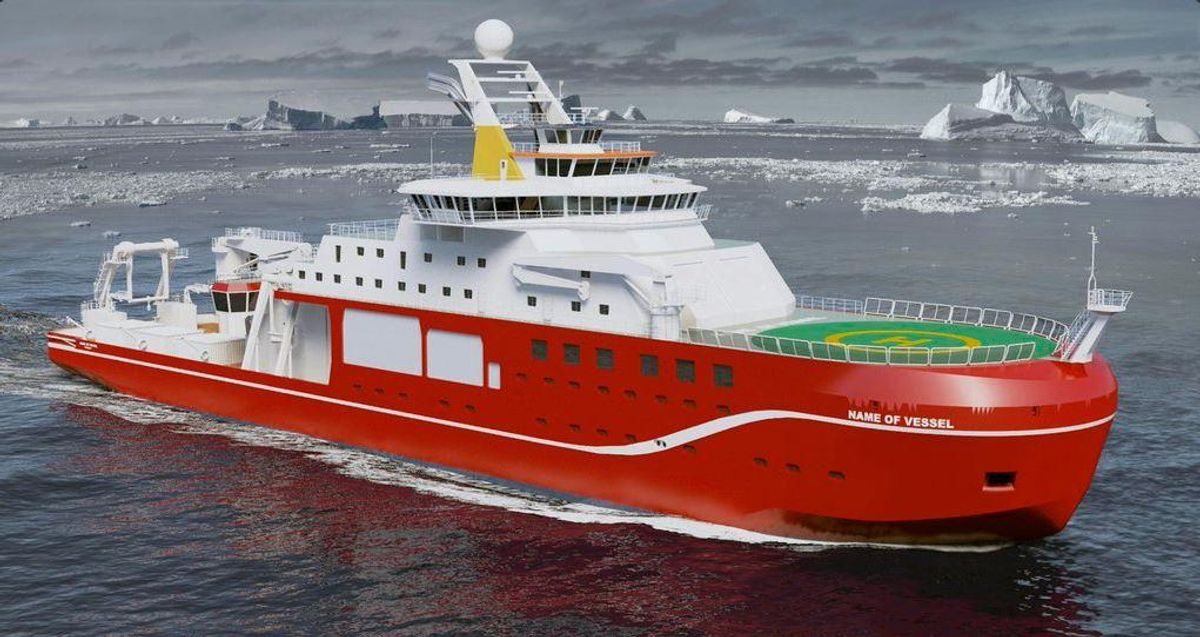 "We're looking for an inspirational name that exemplifies the work it will do," said the initial press release:

Today, the science minister Jo Johnson is calling for school pupils, parents, teachers and adults to take part in a once in a lifetime opportunity to suggest a name they would like to see on the side of the UK's polar research ship when she takes to the seas.

"Can you imagine one of the world's biggest research labs travelling to the Antarctic with your suggested name proudly emblazoned on the side? The polar research ship represents a leap forward in securing Britain's place as a world leader in marine and climate change science - and illustrates this government's commitment to invest in research facilities on a record scale.

With the eyes of the world on this ship, this campaign will give everyone across the UK the opportunity to feel part of this exciting project and the untold discoveries it will unearth."

"NERC's new ship will help put the UK at the cutting edge of polar research, as part of this extensive polar programme with £200m investment from the government. Built in the North West of England, she will help bring an economic boost to the region and to the UK ship building industry. Today we are launching our campaign to bring our ship to the UK people, asking for their help to find her a name that encapsulates her role at the forefront of UK science. We are excited to hear what the public have to suggest and we really are open to ideas."

While the release offered three names (Shackleton, Endeavour, Falcon), presumably to get things started, none of those topped the list of preferred entries. The name that racked up the most votes by far was the perhaps less inspirational than they'd hoped: Boaty McBoatface, bringing in nearly 27,000 votes, well ahead of the second choice, RRS Henry Worsley.

Other suggestions included Usain Boat, Not The Titanic, Clifford The Big Red Boat, and It's Bloody Cold Here. James Hand, a former BBC presenter, accidentally started the "Boaty McBoatface" drive by suggesting it as a joke on the official page.  "It's been utterly bizarre," he said:

I'm running out of ways to describe how utterly bonkers this whole saga has become #NameOurShippic.twitter.com/5HbC6WIFLY

That, in turn, spawned other Twitter accounts (which Hand says he has no, well, hand in):

NERC said in a statement that they are pleased to see that people are embracing the naming in the "spirit of fun," but pointed out that they have final say over the boat's name:

We've had thousands of suggestions made on the website since we officially launched; many of them reflect the importance of the ship's scientific role by celebrating great British explorers and scientists....

We are very much enjoying hearing everyone's ideas.

The official web site for the competition has temporarily crashed because of the wave of international interest that swelled thanks to Boaty McBoatface's success, but polls officially close on 16 April 2016.

The joke didn't stop with water. It made its way to land on 22 March 2016, when a railway worker in England (and with an English sense of humor) temporarily changed the name of a South West commuter train to "Trainy McTrainface": Appearing to pour cold water on the plans, Science Minister Jo Johnson told BBC Radio Five Live on Monday: “There is a process now for us to review all of the public’s choices. Many of them were imaginative, some were more suitable than others.”

Asked what was unsuitable about the name Boaty McBoatface, Johnson said: “I think we were clear when launching the competition that we were looking for a name that would be in keeping with the mission.

“This boat…[is] going to be doing science on some of the most important issues facing humanity. Global warming, climate changing, rising sea-levels, these are issues which affect the lives of 100s of millions of people around the world and these are very important themes.

“So you want a name that fits the gravity and the importance of the subjects that this boat is going to be doing science into.”

Johnson did not directly confirm whether there was still a possibility of seeing the name Boaty McBoatface, or if its supporters' hopes were completely sunk.

On 6 May 2016, the NERC announced that they would be naming the research vessel the RRS Sir David Attenborough: The "Boaty McBoatface" moniker isn't completely lost, though: the name is going to a remotely-operated research submarine: