Elasmotherines, thought to be the prehistoric basis for unicorn legends, previously were thought to have died out at least 350,000 years ago. 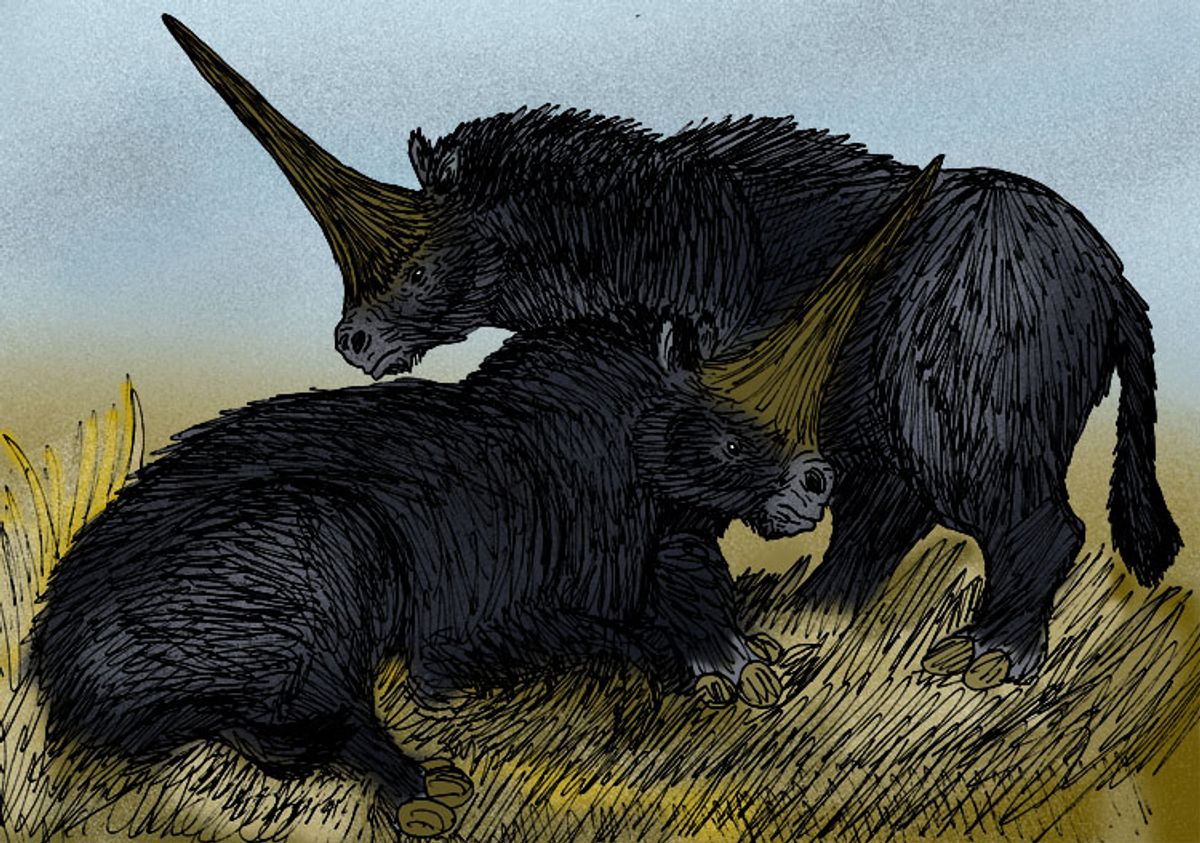 The unicorn has been an enduring mythological symbol for centuries, representing everything from nationalism to innocence.  Its beauty, elusive nature, and purported magical properties has captured the hearts of children (and explorers) throughout history.  A very early description of the fabled unicorn comes from Ctesias, a Greek historian and physician who lived in the 5th century B.C.E., who calls them "wild asses" from India:

Their bodies are white, their heads dark red, and their eyes dark blue. They have a horn on the forehead which is about a foot and a half in length. The dust filed from this horn is administered in a potion as a protection against deadly drugs. The base of this horn, for some two hands’- breadth above the brow, is pure white; the upper part is sharp and of a vivid crimson; and the remainder, or middle portion, is black. Those who drink out of these horns, made into drinking vessels, are not subject, they say, to convulsions or to the holy disease [epilepsy]. Indeed, they are immune even to poisons if, either before or after swallowing such, they drink wine, water, or anything else from these beakers. Other asses, both the tame and the wild, and in fact all animals with solid hoofs, are without the ankle-bone and have no gall in the liver, but these have both the ankle-bone and the gall. This ankle-bone, the most beautiful I have ever seen, is like that of an ox in general appearance and in size, but it is as heavy as lead and its colour is that of cinnabar through and through. The animal is exceedingly swift and powerful, so that no creature, neither the horse nor any other, can overtake it.

This passage (and others from the same general era) were dismissed as fanciful descriptions, likely talking about the rhinoceros or the oryx or even the antelope. Later, they were characterized as — and became part of — fairy tales.

However, evidence that a "unicorn" (actually a species of giant rhino called Elasmotherium, meaning "thin plate beast" and with that characteristic single horn jutting from its head) existed has been around for decades, and new research published in the  American Journal of Applied Sciences indicates that they were around until fairly recently in human history, although they were probably less limpid-eyed and graceful and more huge and formidable than the mythos would have you believe:

Tomsk State University’s Andrei Shpansky and colleagues studied about 20 fossilized mammal teeth and bones uncovered from an 8-kilometer (5-mile) section of the left bank of the Irtysh River near Kozhamzhar in the Pavlodar Priirtysh Region of Kazakhstan. Residents of Kozhamzhar village have previously found bone fragments in the downstream outcrop, part of which has already been washed away. In fact, the fossils studied here were collected by locals in the late 1980s and brought to the Museum of Nature at Pavlodar State Pedagogical Institute in 2010.

Additionally, the team analyzed the Elasmotherium skull using AMS radiocarbon dating. This yielded a young age of 26,038 (plus or minus 356) years before present, with a calibration age ranging from 28,985 to 27,490 BCE. Not only are these Elasmotherium skulls bigger than that of eastern European elasmotheriums, these giant rhinos also existed for longer in the southeast of the West Siberian Plain.

Previously, E. sibiricum was thought to have died out more than 350,000 years ago, along with its other known counterparts.