Powerball frenzies aren't the only interesting lottery phenomenon, which has long inspired a wealth of urban legends. 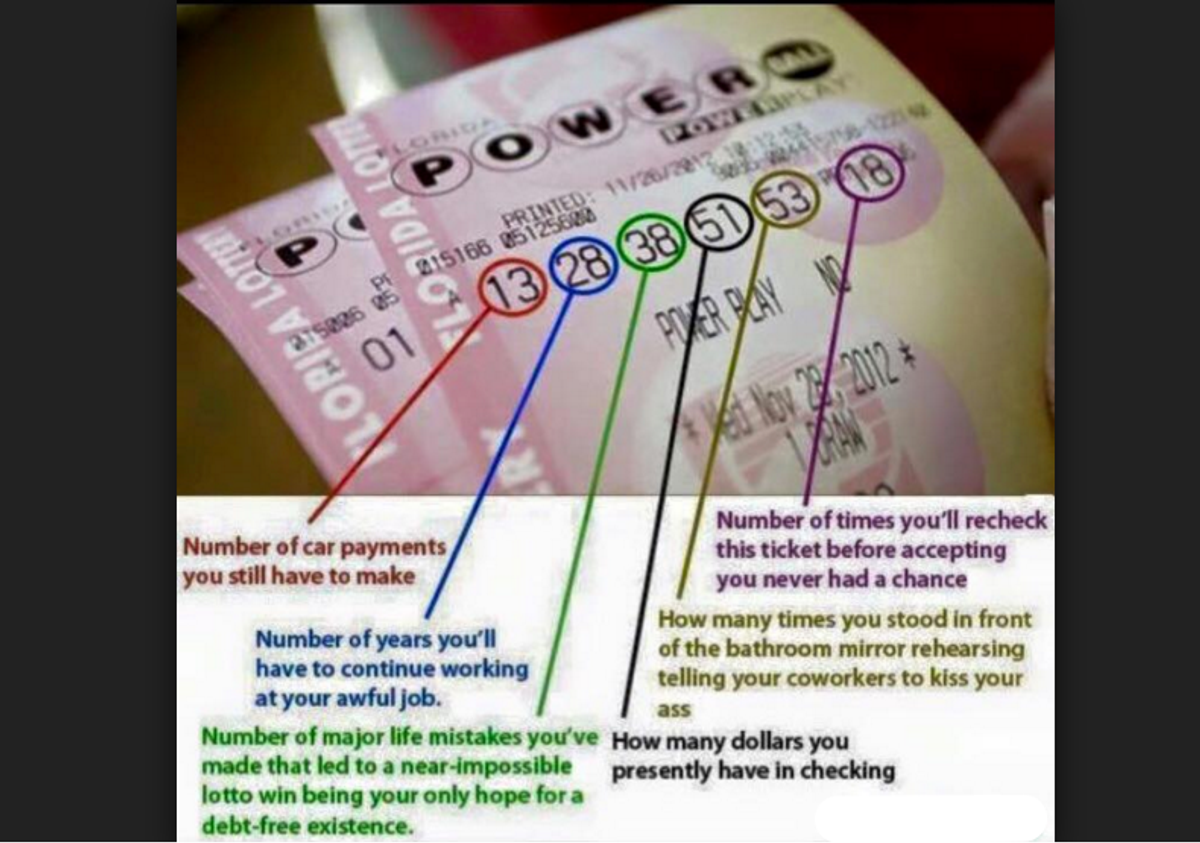 In January 2016, the multi-state Powerball lottery's jackpot broke records when it surpassed a billion dollars.  A subsequent mathematically-challenged meme highlighted what might be construed as a complicated relationship between the public and the occasional "dollar and a dream" winner.

Like any mysterious aspect of pop culture, Powerball and state lotteries have inspired a number of urban legends and popular folklore-based beliefs. Some are in the realm of exaggerated but true stories, others are cautionary parables couched by the dangling prospect of a big win... and as always, vultures leverage lotto-lust to bend social media users to their will (sometimes intentionally, but every so often inadvertently.)

Luck be a Lady

Astronomical odds are generally a part of any broad discussion of massive Powerball jackpot.  Your chances of winning are invariably compared to the probability of descriptively unlikely events, while others harness the media trend to advance an entirely different narrative:

#Powerball jackpot at $450 million dollars! Unfortunately, the odds are NOT in your favor. 1 in 292-million chance.. pic.twitter.com/910tWJQCKz

Think of this when you go out to buy that #Powerball ticket this week. #CopBlock

We all know the long odds and infinitesimally low chance one of us will be taking custody of the giant check on TV. Consequently, stories of beating those odds remain perennially enchanting. One story of lottery dreams-come-true made it to the silver screen. The 1994 film It Could Happen To You dramatized an instance in 1984 in which a police officer promised half his jackpot to a waitress in lieu of a tip. The following night, the pair were each $3 million richer.

Twice, lottery players scored big jackpots by selecting the numbers proffered by a fortune cookie in what was simply a fortuitous coincidence. But in a separate incident, lottery officials were initially suspicious of a massive uptick in prize claimants. As it turned out, everything was above board -- but the wide distribution of a single set of numbers (again in a fortune cookie) led to some initial head-scratching on the part of state gaming commissions:

The sagacious confections had been manufacturered at Wonton Food Inc. of Long Island City in Queens, New York. That factory produces four million fortune cookies a day vended under a variety of brands, which is how the cookies came to influence lottery players in so many states.

Stunned lottery officials heard time and again from the second-place winners that they'd gotten their numbers from cookies. Additional confirmation of the claim came from the lottery tickets themselves: nearly all of them listed "40" as the Powerball number, and 40 had been the final of the six numbers given on the fortune cookie slips. Yet another bizarre quirk of chance led to a streak of luck for one lottery ticket holder, when a woman's win was inspired by numbers that came to her in a dream. But not all luck is favorable, as myriad lotto winners' subsequent misfortunes birthed their own lore surrounding a purported lottery curse.

Those tales aren't always simply cautionary, and don't always involve a "monkey's paw" theme of being careful what you wish for, lest you receive it. In 2004, one man's luck abruptly changed when he was struck by a vehicle and killed hours after his big win. In another instance, what would have been a $30 million winning ticket was voided because the buyer didn't want it. And in 1995, a British man took his own life due to the mistaken belief his numbers came in the one week he didn't play.

Then there are outcomes that are merely strange but true (and somewhat portentous feeling.) In 2001 and 2002, strange betting coincidences emerged around September 11th, though as we originally noted, numbers that feature prominently in news stories, such as flight numbers, license plates, and addresses often end up being the selections of large numbers of lottery players in subsequent draws:

News and random chance intersected again on 11 September 2002, the one-year anniversary of the terrorist attacks that destroyed New York's twin World Trade Center towers. The state of New York operates several lottery games, one of which involves choosing a three-digit sequence between 000 and 999, with the winning draw determined by numbered balls circulating in a machine. In the second of two such held draws on 11 September 2002, the winning sequence selected was 9-1-1 ... Lottery officials said that 5,631 people had selected the symbolic numbers, and each winner took home $500.

In a similar coincidence, on 11 September 2011, the tenth anniversary of the 9/11 attacks, the first three winners at the Belmont Park racetrack in New York state were horses bearing the numbers 9, 1 and 1.

Another lottery coincidence occurred on 12 November 2001, when American Airlines Flight 587, bound for the Dominican Republic from New York City, crashed in Queens shortly after take-off. The state of New Jersey holds two Pick-3 lottery drawings per day, and on 12 November 2001 the numbers selected for the evening draw matched the number of the crashed flight: 5-8-7. Even more coincidentally, the same numbers has been selected for the earlier mid-day draw, with the two digits transposed: 5-7-8. So many people (27,829) chose the former combination for the evening draw that the prize was a mere $16, considerably lower than the average $275 payout.

Lottery fantasies are so ubiquitous that the idea of a jackpot can add a powerful punch to basic cautionary tales. A standard warning to keep a close eye on one's personal belongings and valuables sticks harder when the proverbial looted item was a winning ticket; tales of that nature have circulated since at least the early 1970s.

Another parable remains consistently popular, transcending word-of-mouth to become a Facebook standard; the character Shepherd Book made reference to its general gist in the Firefly episode "War Stories":

Live with a man 40 years. Share his house, his meals. Speak on every subject. Then tie him up, and hold him over the volcano's edge. And on that day, you will finally meet the man.

A common iteration describes a presumptive lottery winner who tipped his cards too soon, scorching the Earth of what he believed to be his former mundane life before learning the notification of his win was made in error. Another iteration involves a radio station lottery prank gone awry. This legend has also been inverted as a popular joke (which pops up intermittently on social media sites) in which the spurned wife bests her cad of a husband with a well-timed lottery win on the day he leaves her (often for her sister).

With all the interest generated by Powerball and lottery draws, some social media perfidy is to be expected. What are typically coupon scams take on a festive Powerball-based flair, most of them connected to simple like-farming or info-collecting scam bots. A man named Nolan Daniels became an internet sensation in November 2012 by claiming he had won a Powerball lottery, and pledged to share his winnings in exchange for social media engagement, later admitting he'd fabricated the story.

Daniels' ploy inspired a number of other Facebook confabulators. A "Sokhavy Hilton" upped the fake-money stakes by promising money to a larger number of users, and genuine lotto winner Rick Knudsen has been impersonated by a number of social media scammers falsely claiming he's redistributing his winnings. To date, we've been unable to locate any instance of a lottery winner using such tactics to bestow windfalls upon random social media users, and anyone claiming otherwise is very likely pulling your leg.

Finally, an inordinate amount of lottery hand-wringing speaks to our rejection of the belief that something so life-altering can occur entirely at random. This manifests in a number of shaky "strategies" to affect a big win, and also results in the largest number of lottery complaints. Chance is a funny thing, and humans instinctively seek patterns:

WHY ARE ALL THE JACKPOT WINNERS FROM CERTAIN STATES?

Officials with the Multi-State Lottery Association, a group of state lotteries that oversee Powerball, said this is one of the most frequent complaints.

It's "human nature to think the other guy is winning," said Sally Lunsford, public affairs director for the Kansas Lottery.

It's also wrong, though there are anomalies ... Lottery officials, backed by mathematicians, said probabilities equal out over time, but in shorter periods, oddities can occur, in the same way someone could flip a coin and get heads five times in a row.

Another common misconception overestimates the influence of previous events on future outcomes, like the fallacy that a coin which has flipped heads is likelier to go tails on its subsequent toss: The "Gambler's Fallacy" regularly grooms people to see a predictable pattern where no such predictability exists. However, one could take comfort in the fact that larger jackpots don't carry longer odds. No matter the size of the payout, Powerball tickets have a 1 in 292.2 million chance of winning, regardless of how many other people play.