A viral Facebook post reported a veteran who insisted on wearing a USMC hat for his driver's license photo after seeing Sikhs being allowed to pose in turbans. 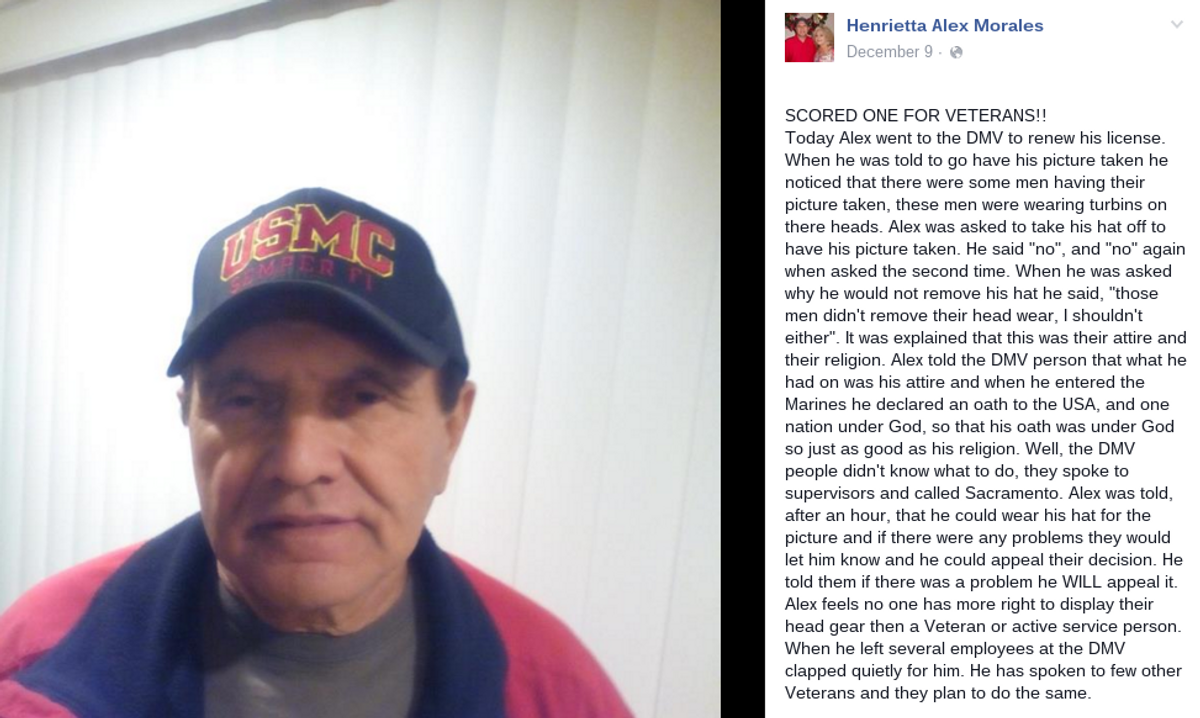 SCORED ONE FOR VETERANS!!

Today Alex went to the DMV to renew his license. When he was told to go have his picture taken he noticed that there were some men having their picture taken, these men were wearing turbins on there heads. Alex was asked to take his hat off to have his picture taken. He said "no", and "no" again when asked the second time. When he was asked why he would not remove his hat he said, "those men didn't remove their head wear, I shouldn't either". It was explained that this was their attire and their religion. Alex told the DMV person that what he had on was his attire and when he entered the Marines he declared an oath to the USA, and one nation under God, so that his oath was under God so just as good as his religion.

Well, the DMV people didn't know what to do, they spoke to supervisors and called Sacramento. Alex was told, after an hour, that he could wear his hat for the picture and if there were any problems they would let him know and he could appeal their decision. He told them if there was a problem he WILL appeal it. Alex feels no one has more right to display their head gear then a Veteran or active service person. When he left several employees at the DMV clapped quietly for him. He has spoken to few other Veterans and they plan to do the same.

SCORED ONE FOR VETERANS!!Today Alex went to the DMV to renew his license. When he was told to go have his picture...

The narrator of the anecdote appeared to be Henrietta, who relayed a story about Alex. According to the post, Alex visited a Department of Motor Vehicles (DMV) office near Bakersfield, California, on 9 December 2015 and purportedly observed individuals standing for driver's license photos while wearing religious headwear such as "turbins" [sic]. When Alex (who was wearing a United States Marine Corps cap) subsequently stood for his own photograph, he refused to remove his cap and argued: "[if] those men didn't remove their head wear, I shouldn't either." (The other DMV visitors were apparently Sikhs, and the wearing of turbans is mandatory for all Amritdhari Sikh men.)

Eventually, Henrietta said, DMV employees contacted a supervising office and relented: Alex was permitted to wear his non-religious hat for his photograph. Against whom Alex "scored one for veterans" wasn't clear, nor was the reason why he was incensed about the DMV's allowing exceptions for the wearing of religious garb in license photographs. (The subject of religious headwear exemptions at motor vehicle offices in other states has been a controversial one, however.)

At the story's conclusion, Henrietta said that DMV employees "clapped quietly" for Alex (presumably in support of his insistence upon wearing the hat), a week later she shared a second post in which Alex could be seen wearing his USMC cap in his driver's license photograph:

ALEX DID IT!!! He got his license with his hat on!! Pass the word to all Veterans so they can do it too. We have over 120,000 shares and even more likes. Yay for the Veterans!!!!

(On the same date, Morales combined the new photograph with the original status update in a separate post.)

California's laws with respect to driver's licenses are complex (they can be viewed in full here). For the most part, hats are among the items that residents are discouraged from wearing in license and ID card photographs due to their interference with the purpose of the pictures, as since-retired California DMV director George Valverde explained in a Roseville Press Tribunearticle:

The department prefers the removal of headgear, unless it is part of your normal identification, or is worn because of religious beliefs.

In those instances, headgear is permissible as long as the individual's face is visible. Generally, headgear such as a baseball hat can obstruct the eyes, nose, mouth or cause dark shadows. This can result in unacceptable photographs and unnecessary return trips to our field offices.

A 2001 Los Angeles Times article made the same point with respect to hats in photographs:

A couple of reminders for anyone headed to the DMV for a license: no hats, turbans or facial scarfs for the picture, except for religious purposes. A woman in Idaho successfully fought the DMV there recently for refusing to shoot her with a face scarf. If you wear glasses, they'll ask you to remove them because of the glare. The license, of course, will state whether you're required to wear them for driving.

On a federal level, the same rules apply for passport photos:

You may only wear a hat or head covering if you wear it daily for religious purposes. Your full face must be visible and your head covering cannot obscure your hairline or cast shadows on your face.

A comprehensive 2005 document (attributed to CAIR, the Council on American-Islamic Relations) compiled and compared relevant laws and statutes in all 50 states pertaining to religious headwear in identity document photographs [PDF]. Regarding policies in California, the group noted:

A license shall bear a full face engraved picture or photograph of the licensee ... The DMV in the state of California wants to be sensitive to the needs of all applicants and does allow headgear to be worn because of religious beliefs provided it does not obscure the applicant’s facial features.

However, it may be necessary to ask the licensee to push back the headgear to eliminate dark shadows on his/her face. No written statement from the applicant is necessary regarding the wearing of the headgear. The applicant's verbal statement is sufficient.

Not infrequently, those religious exemptions are unknown to DMV employees. A 2008 press release issued by the Sikh American Legal Defense and Education Fund (SALDEF) observed that:

The California Department of Motor Vehicles (DMV) recently apologized to Mr. Ramandeep Singh Anand and the Sikh American community after Mr. Anand was initially barred from taking his drivers license photograph while wearing his religiously mandated turban at the West Covina branch of the DMV.

Mr. Valverde has instructed DMV staff to review cultural and religious accommodation policies including specific references to the Sikh turban. While Mr. Anand was able to take his picture that day, it required an inordinate amount of discussion, explanation and time that some of the most vulnerable within the Sikh community may not have understood how to navigate through. SALDEF is continuing to work with the DMV to ensure long-term protections are implemented.

California statue requires a full-face photograph which displays the facial features (eyes, nose, and mouth). California residents are not required to remove any headgear that is part of his/her normal identification or worn due to religious beliefs such as the turban.

By and large, residents of all states (including California) are generally not permitted to wear hats in official identity documentation photographs. Exemptions broadly exist for religious headwear (such as Sikh turbans and Jewish yarmulkes), but those exceptions are based upon religion requirements and traditions and not hats worn for decoration or other secular reasons.

We have contacted the California DMV for clarification on their policies pertaining to non-religious hats in identity document photographs but have not yet received a reply.