A widely shared article about an Arabic calligraphy assignment in Augusta County forced administrators to close the school due to alarming calls and e-mails. 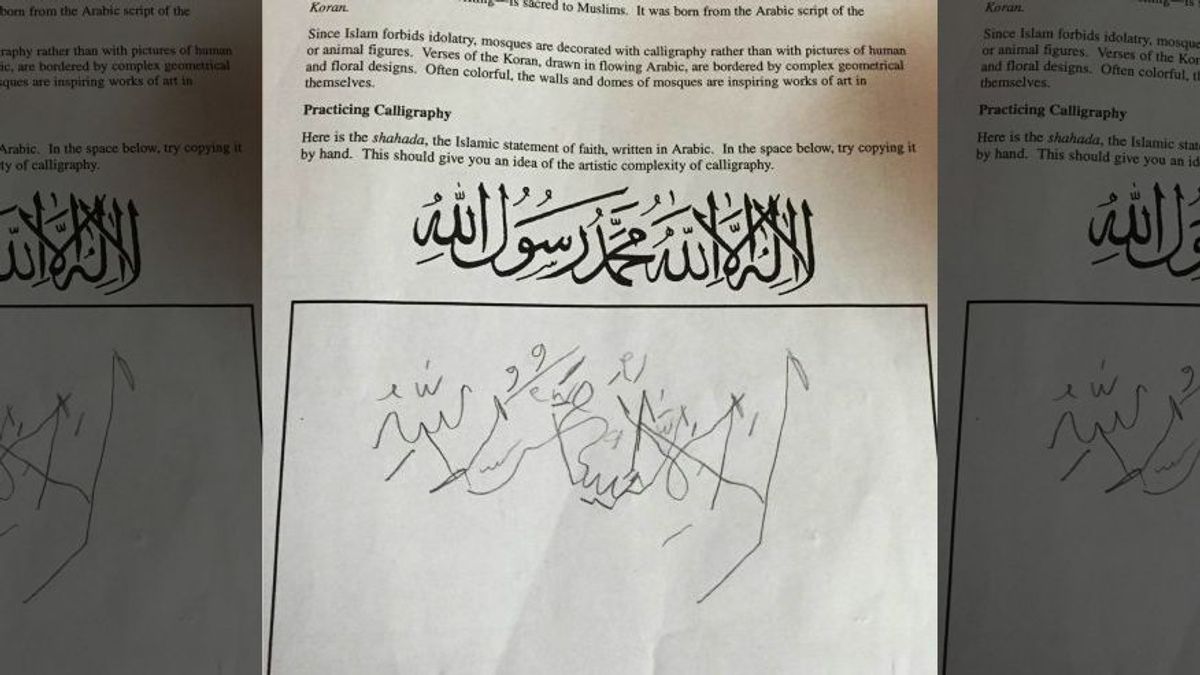 On 15 December 2015, Fox News opinion columnist Todd Starnes published an editorial that focused on a calligraphy assignment given to students at Augusta County, Virginia, schools. Describing the writing assignment as "indoctrination," Starnes wrote:

A Virginia school district is defending a classroom assignment that required students to practice calligraphy by writing the Muslim statement of faith, "There is no god but Allah. Muhammad is the messenger of Allah." ... Female students at Riverheads High School in Augusta County, Virginia, were also invited to wear Muslim clothing[.]

The Muslim-friendly calligraphy assignment took place in a world geography class. The teacher had the kids copy the Muslim statement of faith, also known as the shahada ... there were more than likely a few Christian teenagers in that room who had no idea they were writing, "There is no god but Allah."

The editorial included a statement from the school district clarifying that the assignment was part of a world geography curriculum:

"Neither these lessons, nor any other lesson in the world geography course, are an attempt at indoctrination to Islam or any other religion, or a request for students to renounce their own faith or profess any belief," the district said in a statement provided to Fox News.

"The statement presented as an example of the calligraphy was not translated for students, nor were students asked to translate it, recite it or otherwise adopt or pronounce it as a personal belief," the district stated.

Children studying cultures and religions as part of a geography class incidentally touched upon the subject of Islam, causing some parents to became deeply alarmed. Although Starnes included statements in which Augusta County schools explicitly detailed why the study of other cultures and religions didn't equate to indoctrinating students into them, his editorial insinuated that the district's words belied their true intent:

And what about having the female students dressing up in Islamic garb — is that consistent with the state mandates, too?

The district said the students were taught about the "modest dress adopted by many in the Islamic faith and were invited to try on a scarf as a part of an interactive lesson about the Islamic concept of modest dress."

On the evening of 17 December 2015, multiple news outlets confirmed the abrupt closure of Augusta County Schools. Local television station WHSV reported that "Augusta County Public Schools will be closed on Friday, and all games and afternoon activities for Thursday evening have been canceled."

The next day, Augusta County Schools published the following statement to their web site regarding the closures and cancellations:

Augusta County Schools and all administrative offices will be closed Friday, December 18, 2015. All after school activities for Thursday, December 17th are canceled.

Following parental objections to the World Geography curriculum and ensuing related media coverage, the school division began receiving voluminous phone calls and electronic mail locally and from outside the area. As a result of those communications, the Sheriff’s Office and the school division coordinated to increase police presence at Augusta County schools and to monitor those communications. The communications have significantly increased in volume today and based on concerns regarding the tone and content of those communications, Sheriff Fisher and Dr. Bond mutually decided schools and school offices will be closed on Friday, December 18, 2015. While there has been no specific threat of harm to students, schools and school offices will be closed Friday, December 18, 2015. All extra-curricular activities are likewise cancelled for tonight, Thursday, December 17, through the weekend. We regret having to take this action, but we are doing so based on the recommendations of law enforcement and the Augusta County School Board out of an abundance of caution.

Finally, the Augusta County School Board and Dr. Bond appreciate parents bringing concerns directly to our attention, and a constructive and respectful dialogue between school and community is always welcome. As we have emphasized, no lesson was designed to promote a religious viewpoint or change any student's religious belief. Although students will continue to learn about world religions as required by the state Board of Education and the Commonwealth’s Standards of Learning, a different, non-religious sample of Arabic calligraphy will be used in the future.

Starnes published an update to Facebook shortly after 8:30 P.M. on 17 December 2015 but made no mention of the controversy or closures in Augusta County, Virginia. He similarly posted to Twitter but again didn't comment on the school disruptions.

The closure of Augusta County schools wasn't the first controversy spearheaded by Starnes' columns, many of which focused on perceived slights against Christianity, Christians, and Christmas. Starnes previously advanced claims of a ban of Christian objects at VA chapels, a ban on the phrase "Merry Christmas" (and Christmas trees) at VA hospitals, a ban on a religious song at high school football games, a University chapel renovation involving the removal of pews to purportedly placate Muslims, the replacement of the word "God" with the word "Allah" in the Pledge of Allegiance, court-martials involving Christian servicemen, bans on Christian gift baskets at the 2012 Democratic National Convention, a ban on American flags (which happened to be draped over flammable barbecue pits at a food event), and a claim President Obama egregiously misrepresented the meaning of A Charlie Brown Christmas.